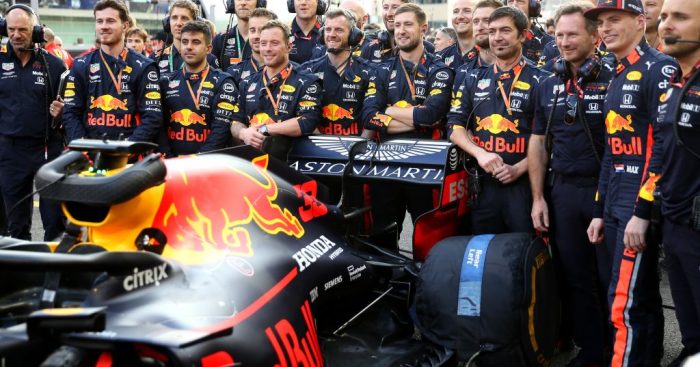 Max Verstappen is pleased to have secured P3 in the Drivers’ Championship, but for him the true goal is fighting for the title next season.

The Red Bull driver took P3 by 14 points over Ferrari’s Charles Leclerc after finishing second in Abu Dhabi, capping off a strong first year for the Red Bull/Honda partnership and giving Verstappen his highest finishing position in an F1 Championship.

But while that’s a nice achievement, Verstappen made it clear that the true goal is to deny Mercedes a seventh Constructors’ and Drivers’ double in a row.

“I think overall the pace was good. There was not so much more we could have done,” Verstappen told reporters when speaking about the season finale in Abu Dhabi.

“The strategy was good from the team, and I passed the Ferrari on the track and we could do our own race. Of course very happy to finish the season like this.

“Austria. I think also the first victory for Honda in the V6 era, that was very emotional. And as a team on-track, I think with so many Dutch fans as well, that will be the highlight.

“As a team we want to move forward, so next year we want to fight for the title of course.

“To be in front of the Ferraris in the championship for me I think was a good achievement. We had good wins, a few poles, but for next year, we of course want to fight for the title, so we have to step it up. But I think as a team we can be pleased with the improvement we made through the season.”

A good strategy brought us P2 💪 Finishing 3rd in the championship is a nice ending of 2019. Thank you very much, @redbullracing and @HondaRacingF1, for the whole year 👊🏻 We share some really great moments together #KeepPushing #AbuDhabiGP 🇦🇪 pic.twitter.com/qmvXaU70jG

Verstappen’s team-mate Alex Albon ended the race in P6 having been passed by Sebastian Vettel late on – he put his struggles down to pitting too early and not having DRS.

“We tried to overcut him [Vettel] to begin with, and to be honest I just think we pitted a bit too early,” he admitted.

“The DRS wasn’t working and we just got stuck behind Nico – I think there was a train of us – so we lost a lot of time.

“The tyres did go, but actually I think the pace was pretty good, and then Seb pitted right in front of me and came back at me. ”

The Thai driver was beaten to P6 in the Driver’s Championship by Carlos Sainz, but says he doesn’t mind.