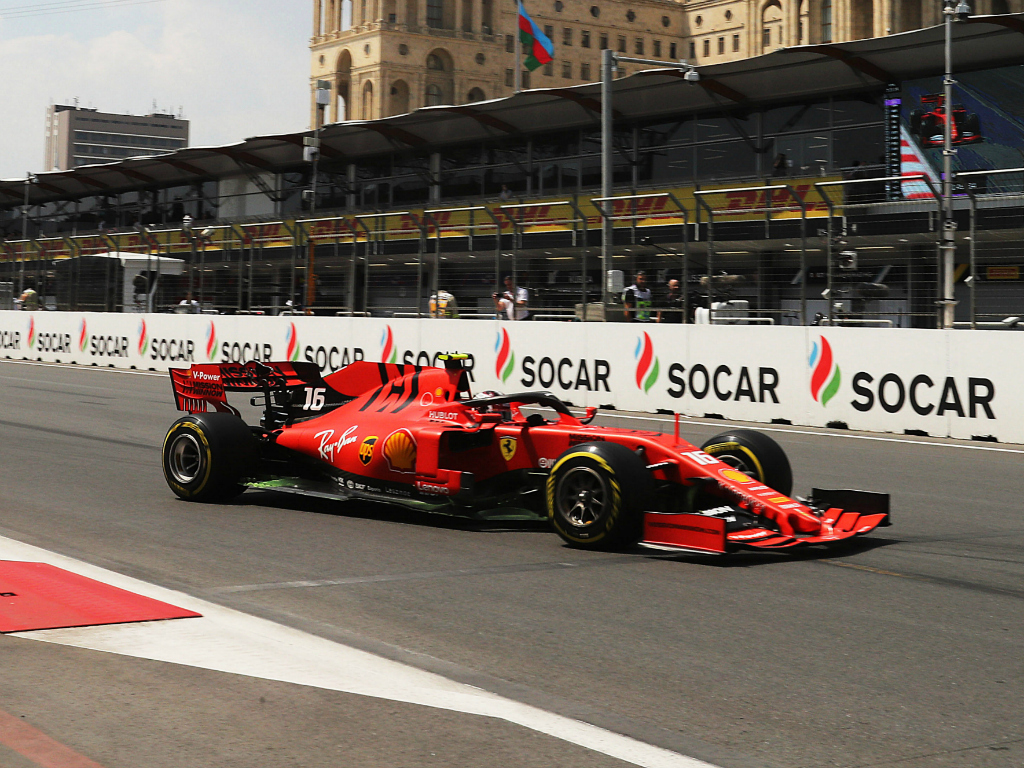 A draining day of practice in Baku concluded with Charles Leclerc leading a Ferrari 1-2 at the end of FP2, but it was yet another session interrupted by red flags.

Leclerc posted a 1:42.872 during his qualifying simulation run with team-mate Sebastian Vettel three tenths behind. Lewis Hamilton concluded the top three a further three tenths back.

Max Verstappen and Valtteri Bottas followed next, but Daniil Kvyat in the Toro Rosso gatecrashed the top six before proceeding to crash out of the session with a big shunt into the barriers.

Lance Stroll would also see his session come to an abrupt end with a crash of his own.

FP2 very much followed the theme of what has been a very chaotic day in Baku, with FP1 effectively cancelled due to a loose drain cover.

With George Russell’s Williams car requiring a chassis change because of that pesky loose drain cover, just 19 drivers would be bolting out of the garages and cracking on with some very busy schedules.

But, in true Baku style, it was just 15 minutes before we saw another red flag as Stroll found the wall, ripping his front wing and front-left tyre clean off.

Whilst the latest clean-up operation commenced, Charles Leclerc stood top of the timesheet with a 1:44.748 to his name – but not without a brush with the barrier himself.

The session resumed with just over an hour left on the session clock, birthday boy Daniil Kvyat the only active driver not to have set a time yet due to a power steering issue.

Leclerc, like many others with more time lost, swiftly switched to the red-striped soft tyres. He immediately took a 1.2 second chunk out of his previous best to a 1:43.598, with team-mate Sebastian Vettel six tenths down in P2.

The Monaco man found another couple of tenths on his next hot lap and was able to play a team role, too, by giving Vettel a tow down that very long dash back to the start/finish line.

But Leclerc would provide an instant response and become the first driver to drop into the 1:42 bracket before heading back into the pits for a quick tyre change.

Drivers were still finding the track tricky to get to grips with as Gasly and Ricciardo headed down one of the escape roads in quick succession heading into the second half of FP2.

Verstappen climbed up to P4 with his qualifying sim programme, nine tenths off the pace of Leclerc but able to split the two Mercedes drivers in P3 and P5 respectively.

Hamilton, after catching up on a few episodes of ‘Game of Thrones’ earlier, was the leading Mercedes driver, yet he was six tenths behind Leclerc.

Just as drivers were settling into some race runs, Kvyat provided the latest unwelcome interruption when he went flying into the barriers, eating up more precious track time with another red flag.

The last 15 minutes of FP2, thankfully, passed without any more major incidents, although Hamilton and Kevin Magnussen did bang  wheels fighting for track space in the closing moments.

A hectic FP3 awaits on Saturday with much time lost on a hectic first day of track action in Baku.