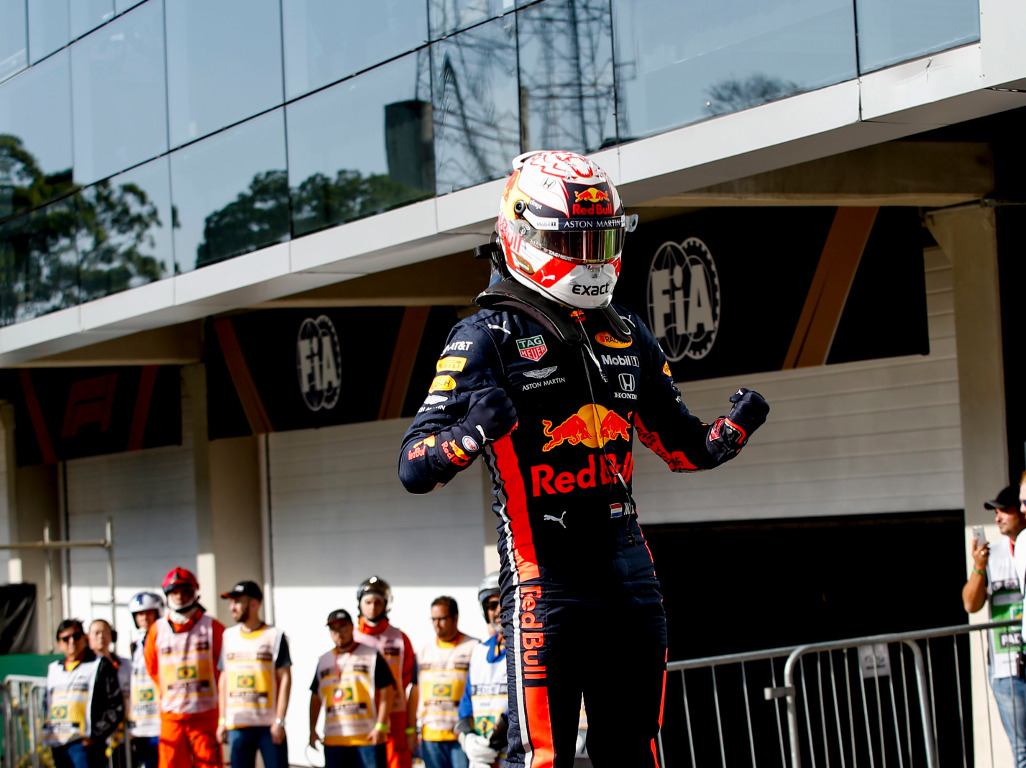 Max Verstappen and Red Bull had the answers to everything Mercedes threw at them as he won the Brazilian GP ahead of Pierre Gasly (!) while Lewis Hamilton lost P3 after causing a collision.

Verstappen made a clean getaway from pole position, left to run his own race as Hamilton and Sebastian Vettel tussled through the opening sequence of corners. Hamilton won that one.

This was a t a s t y move from Lewis Hamilton off the start, almost like he's very good at this whole F1 thing or something #BrazilGP pic.twitter.com/HxMX0qU7aj

Valtteri Bottas lined up fourth ahead of Alexander Albon and Pierre Gasly while Charles Leclerc had a furious but brief battle with first Daniel Ricciardo and then Lando Norris to run P10 at the end of the first lap.

It was apparent from the very first lap that Verstappen wasn’t in tyre saving mode, hinting at a two-stop strategy for the Red Bull driver.

Leclerc was up to seventh by lap 7 while Ricciardo also tried to work his way up the order but instead tangled with Kevin Magnussen at Turn 4. Magnussen spun and Ricciardo was sent scurrying into the pits for a new front wing. Magnussen: “F**king idiot.” Ricciardo was slapped with a five-second time penalty for the collision.

While Verstappen continued to lead Hamilton and Vettel, roughly two seconds separating each driver, Leclerc was up to sixth by lap 11, passing Gasly as he cleared the midfield. He was 11s shy of Vettel and the final podium position.

The top-ten settled down, however, the same cannot be said for those behind as Daniil Kvyat, Nico Hulkenberg, Sergio Perez, Carlos Sainz, who started P20, and Lance Stroll hunted Norris for 11th.

Hamilton was the first of the top-ten to pit, coming in on lap 20. He swapped softs for softs, committing to a two-stop strategy. He was exactly two seconds behind Verstappen who came in a lap later.

New softs as he too set his stall on a two-stopper. It was an epic stop from Red Bull but was ruined by Williams as Robert Kubica pitted ahead of Verstappen and forced him to take avoiding action as he was released into the Red Bull’s path. Kubica was handed a five-second time penalty.

Kubicbruh moment of the highest regard

Verstappen came out behind Hamilton but made short work of the Mercedes driver, easily passing him for position. Unable to run at Verstappen’s pace, Hamilton asked Mercedes if he had “an engine problem”. He was told no, “everything is just a little hot.”

As the first round of pit stops played out and the race hit the halfway point it was Verstappen leading Hamilton, Vettel, Bottas, Albon, Leclerc, Gasly, Kimi Raikkonen, Giovinazzi and Perez.

The race entered another lull as the race built up with tyre strategies and one versus two-stops strategies waiting to play out.

As the pit window again opened it was Bottas who stopped first with Hamilton in a lap later, swapping to mediums. Verstappen stopped after Hamilton, stationary for 1.9s as Red Bull did what they could to help their driver.

He came out 1.5s ahead of Hamilton, who did at least cut the gap through the undercut. Red Bull offered Verstappen words of encouragement: “You did a very good job on that last stint, same again please.”

The race recorded its first retirement on lap 52 as Bottas pulled over onto the grass with smoke coming out of the rear of his W10. It was his first DNF since Germany.

While Bottas’ race ended on the side of the track, Hamilton’s came to life as the Safety Car came out, allowing him to close right up on Verstappen’s rear wing for a restart. Verstappen pitted for brand new softs, Hamilton did not. “I’m going to be a sitting duck,” he complained.

The race resumed with 12 to go with Hamilton doing his best to back up Verstappen into Vettel, bunching up the entire field. Verstappen, though, was wise to it and immediately attacked Hamilton, taking the lead around the outside into the Senna S.

Albon jumped Vettel to run third with the Ferrari driver coming under threat from his team-mate. The two touched and both Ferraris suffered punctures and retired from the race.

With debris all over the track the Safety Car came out with Hamilton pitting for fresh tyres even though there were just four laps remaining, of which two would be behind the Safety Car.

The Safety Car pulled in with two to go. Verstappen immediately bolted ahead of Albon while Hamilton took third off Gasly without even trying. He then attacked Albon, hitting the Thai driver and pitching him into a spin. Hamilton dropped to third. The incident was investigated by the stewards.

Verstappen raced to the victory ahead of Gasly, sweet revenge given that last year he had to settle for second behind Hamilton after colliding with Esteban Ocon as the Racing Point driver tried to unlap himself.

For Gasly, P2 was his first F1 podium while Hamilton was third at the line.

As a result of Hamilton’s five-second penalty after the race for causing a collision, Sainz was promoted to P3, his first-ever podium, ahead of Raikkonen and Giovinazzi while Ricciardo, Norris, Perez and Daniil Kvyat completed the top ten.

Nico Hulkenberg was demoted from P12 to P15 after he was given a five-second time penalty for overtaking Kevin Magnussen before the Safety Car line.