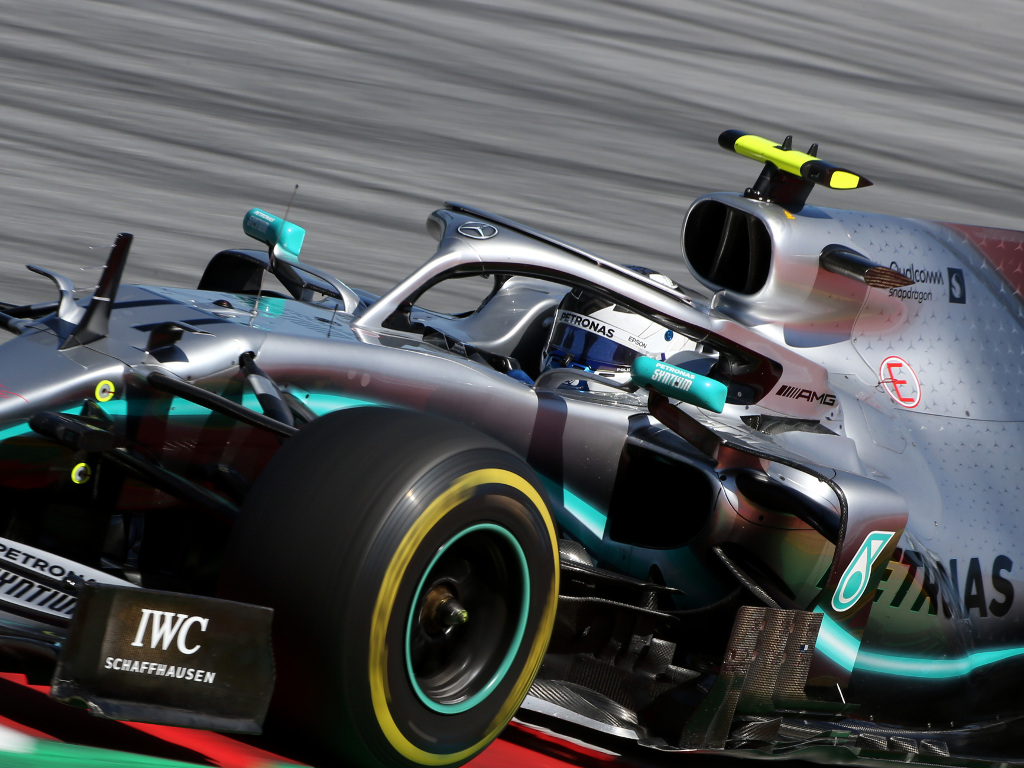 Valtteri Bottas was the man to beat at Silverstone in the dry on Friday afternoon, however, it was the wind that dominated the session with several drivers flying off the track.

Despite a bit of rain in first practice, the Friday afternoon session for the British Grand Prix got underway on a dry Silverstone circuit. Track temperature was 36’C.

Although there were concerns that Kimi Raikkonen’s C38 wouldn’t be ready in time for the start of FP2 after the earlier engine failure, the Finn was the first man out on track.

The Iceman is first on track after his earlier FP1 troubles 💪#BritishGP 🇬🇧 #F1 pic.twitter.com/iyv5d6AaZV

Raikkonen clocked a 1:31.8 to get the timesheet rolling but minutes later was down in fifth with Daniil Kvyat P1 with a 1:29.4.

While Kvyat was setting fastest laps, his team-mate Alexander Albon was cutting the grass, going off at Brooklands, while Robert Kubica had a moment at Club in the Williams.

Lando Norris was the next to lead the way before he was pipped by Valtteri Bottas, a 1:27.191 for the Mercedes driver who then lowered the benchmark time to a 1:26.781.

Max Verstappen and FP1 pace-setter Pierre Gasly fought over second place while Charles Leclerc lined up fourth in the Ferrari.

Sebastian Vettel was down in 13th after his first timed lap having earlier taken a trip across the grass at Becketts.

Vettel improved to fifth but was still a full second slower than Bottas while Lewis Hamilton was P6 – 1.2s down – after his afternoon’s first stint.

Heading out for a second run Norris added his name to the list of those getting it wrong, going off at the Maggotts-Becketts section, as the wind continued to affect the drivers. Pierre Gasly was the next to eat dust.

Swapping to the soft tyres Hamilton improved to second but was 0.02s down on Bottas with Leclerc, purple in the first sector, only able to move up to third place. Bottas upped his pace to a 1:26.732.

Hamilton’s next flying lap had the reigning World Champion off and into the dirt at Becketts with Nico Hulkenberg also having a moment.

As the clock counted down on Friday’s on-track action, Bottas remained the one to beat with his 1:26.732 despite being stuck in the garage with an engine issue that was reportedly spark plug related.

It’s looking tight at the top! 👀 Just 0.069s in it between our pair of silver W10s around this mighty 5.891 km @SilverstoneUK circuit… #BritishGP pic.twitter.com/HHm73kB83a

Hamilton was second, 0.069s down, with the Ferraris of Leclerc and Vettel third and fourth. They were 0.197s and 0.448s off the pace with Gasly P5 for Red Bull.

Daniel Ricciardo was P14 but didn’t see the end of the session as his Renault RS19 “switched off”, leaving him stranded at Chapel and in need of assistance.

Romain Grosjean’s troubles continued on Friday afternoon. After ripping off his front wing in a silly mistake in FP1, his VF19 suffered a hydraulic leak that kept him out of the action for almost 45 minutes.

Romain’s mechanics are investigating a hydraulic leak on the car. It’s not quite ready to go out yet. #HaasF1 #BritishGP #FP2 pic.twitter.com/xSTQIEJvaD

Grosjean was P18 with only the Williams drivers slower.

George Russell, who needed a helpful push down the pit lane when he was unable to get his FW42 into gear, was slowest of all in 20th place. He covered just 11 laps due to the gearbox issue.