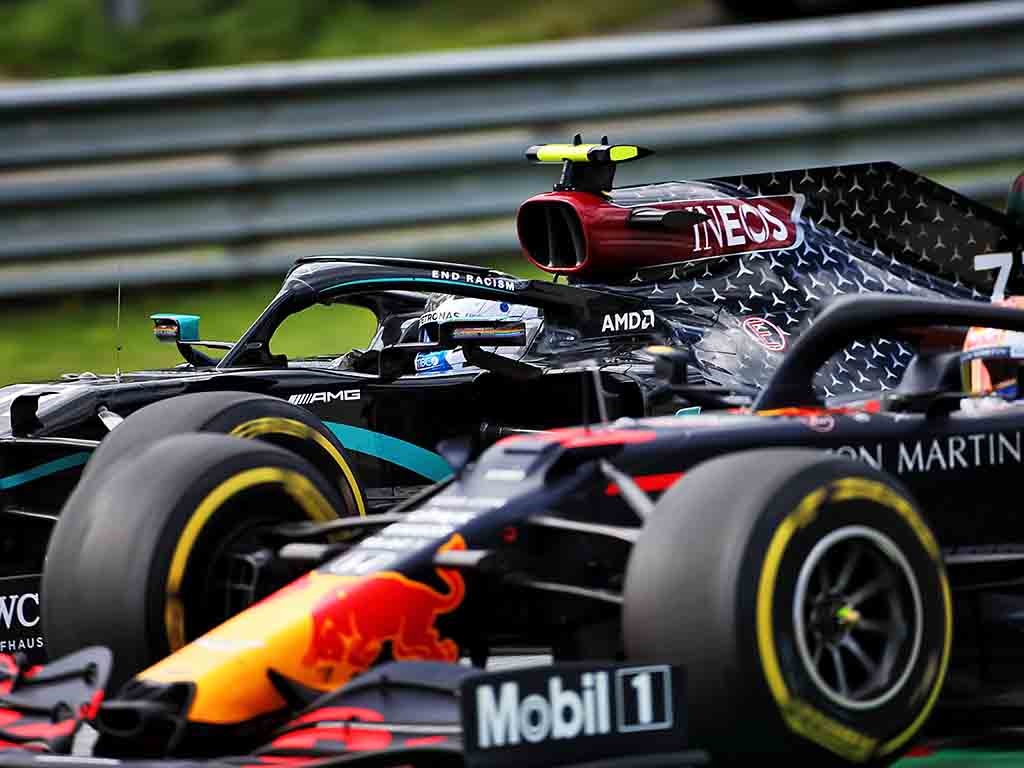 Despite being their closest challenger, Max Verstappen was some way off Mercedes in British Grand Prix qualifying – but he expects to be closer in the race.

The Dutchman qualified in P3, a full second off Lewis Hamilton and seven-tenths behind Valtteri Bottas.

After struggling slightly in the warmer conditions on Friday, Mercedes enjoyed such a large advantage throughout FP1 and qualifying.

However, Verstappen is optimistic that he may be able to get closer to the front-runners on race day.

“I believe we are a little bit closer in the race,” he said after the session.

“I don’t say that I’m going to fight them but at least we have a fighting chance starting third.”

P3 was by no means a given for Verstappen, shown by the fact that the other Red Bull failed to make it to Q3. All things considered, he’s happy with his efforts.

“I think the lap at the end of Q2 was pretty good, but you could see very early on in qualifying they [Mercedes] were just way too fast, like they have been the last few races,” he added.

“You just have to accept that. You try to do the best you can and that’s P3 for us, so I’m pretty pleased about that.”

I had a pretty good qualifying lap and starting 3rd gives us the chance to fight for a good race result #KeepPushing #BritishGP 🇬🇧 pic.twitter.com/vyMYU9rVPe

It hadn’t been a great weekend for Alex Albon prior to qualifying as he retired from FP2 after a heavy crash with the barriers.

Things didn’t get any better on Saturday as he got knocked out in Q2 and will start the race down in P12.

After not having enough pace on mediums, he was expected to improve enough to make the top 10 on softs, and isn’t sure what went wrong.

“We tried the medium tyres. It wasn’t a terrible lap, but it wasn’t great either,” he said.

“I made a few mistakes on that lap, so I knew I could go faster. At that point, you have to consider whether to take the risk with the medium tyre or play safe with the soft tyre.

“We chose the soft tyre. I can’t really explain that last lap too much. We didn’t extract the lap and that was it. It wasn’t by much, but we should have been a little higher than we were in the end.”