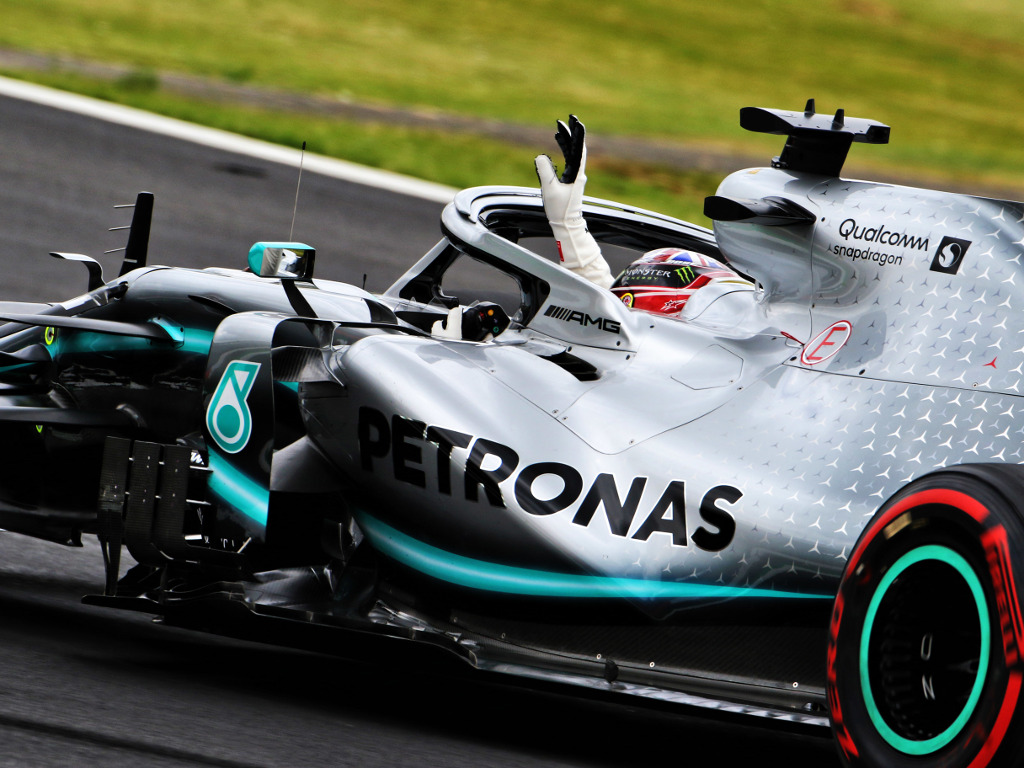 Lewis Hamilton made the most of a Safety Car to grab a record-breaking sixth British GP win as Max Verstappen and Charles Leclerc created the highlights reel and Sebastian Vettel the drama.

Sunday’s British Grand Prix was all about pressure as the Mercedes team-mates fought for the victory and Red Bull and Ferrari battled for the final podium position.

Bottas started from pole position but it was Hamilton who made the better getaway only for the Finn to cross the track to cover him. Rear wing to nose throughout the opening lap, Hamilton had a look at Brooklands but couldn’t make it. Four laps later he did, briefly.

A deafening roar went up from the British crowds as Hamilton used a cut-back to pass Bottas at Luffield only for the Finn to retake the lead down the inside of Copse. Charles Leclerc lined up third ahead of Max Verstappen, Sebastian Vettel and Pierre Gasly.

While they tussled at the sharp end, Haas found themselves making up the rear of the field. The American team were the unlucky losers on the opening lap as Romain Grosjean and Kevin Magnussen made contact, both suffering punctures and had to pit for fresh tyres. Another weekend going from bad to worse to disaster for Haas as both drivers would soon retire.

The Haas team-mates could have learned a lesson watching Lando Norris and Daniel Ricciardo fight over seventh as they went wheel-to-wheel through several corners with the McLaren driver coming out on top.

Lap 8/52: Sadly we’ve had to retire @KevinMagnussen. Reports on the radio of something feeling loose on the car. #HaasF1 #BritishGP pic.twitter.com/9Uqj46dT7M

That pit stop was already more exciting than the whole French GP. Almost ran over the @McLarenF1 crew but man that was exciting. #F1 pic.twitter.com/hMjyLVpk5L

Behind them Norris and Ricciardo also pitted with the Aussie getting the jump on the McLaren driver with race leader Bottas the next man in. He had a lead of 1.1s over Hamilton when he stopped, swapping mediums for mediums.

Back to the Leclerc v Verstappen battle, the Dutchman had several looks up the inside, the outside, the upside, the downside, just about everywhere. But the Ferrari driver’s elbows were out and he wasn’t willing to give an inch – especially after Austria. Verstappen accused him of being “late” in his defending but the stewards didn’t deem it worth investigating.

On lap 21 the face of the race changed when the Safety Car came out for Antonio Giovinazzi beaching his Alfa Romeo in the Vale gravel. Hamilton, in the lead after Bottas’ stop, grabbed a free pit stop as did Vettel and also Verstappen. For some reason Ferrari did not bring Leclerc in immediately, instead bringing him in a lap later and putting him on the hard tyres. He fell from third to sixth. “How the hell did we lose the positions,” was Leclerc’s angry question.

The top six kept it clean but behind them there was chaos in the midfield with Hulkenberg and Sergio Perez making contact, the SportPesa Racing Point driver losing his front wing in the tussle and pitting for repairs.

The restart meant the resumption of Verstappen versus Leclerc with the Ferrari driver trying a move around Club before taking the inside line at Vale and giving Verstappen a shove off the track. Leclerc, though, was unable to take advantage and rather than take a position, lost metres to the Red Bull. Red Bull put an end to that battle, getting Gasly to move over and allow Verstappen up to fourth.

Back at the front Hamilton running the hard tyres kept Bottas at bay, seemingly without having to try very hard, while Verstappen set about hunting down Vettel for third.

Leclerc passed the other Red Bull, Gasly, at Turn 3 to move up to fifth, make that third, as Verstappen made his move on Vettel – and the German crashed into the back of him. Both cars were damaged in the crash with Verstappen falling to P5 and Vettel pitting for a new front wing. The stewards investigated and Vettel, P17 and a lap down, was handed a 10-second time penalty.

As the laps counted down Hamilton was called into the pits but with Bottas complaining about a vibration, Mercedes pitted him instead. The mechanics again came out but again Hamilton drove past the pit entrance, not interested in risking his P1 against his team-mate – even though his tyres were on the cusp of their lifespan.

Hamilton raced to the chequered flag, recording his record-breaking sixth British GP win while Bottas made it a Mercedes 1-2. Hamilton also beat Bottas to the fastest lap point, taking it on the final lap of the grand prix!

Leclerc was third for Ferrari ahead of the Red Bulls of Gasly and Verstappen.

Sainz brought his McLaren home in sixth place as he held off the Renault of Ricciardo while Kimi Raikonen, Daniil Kvyat and Hulkenberg completed the points.