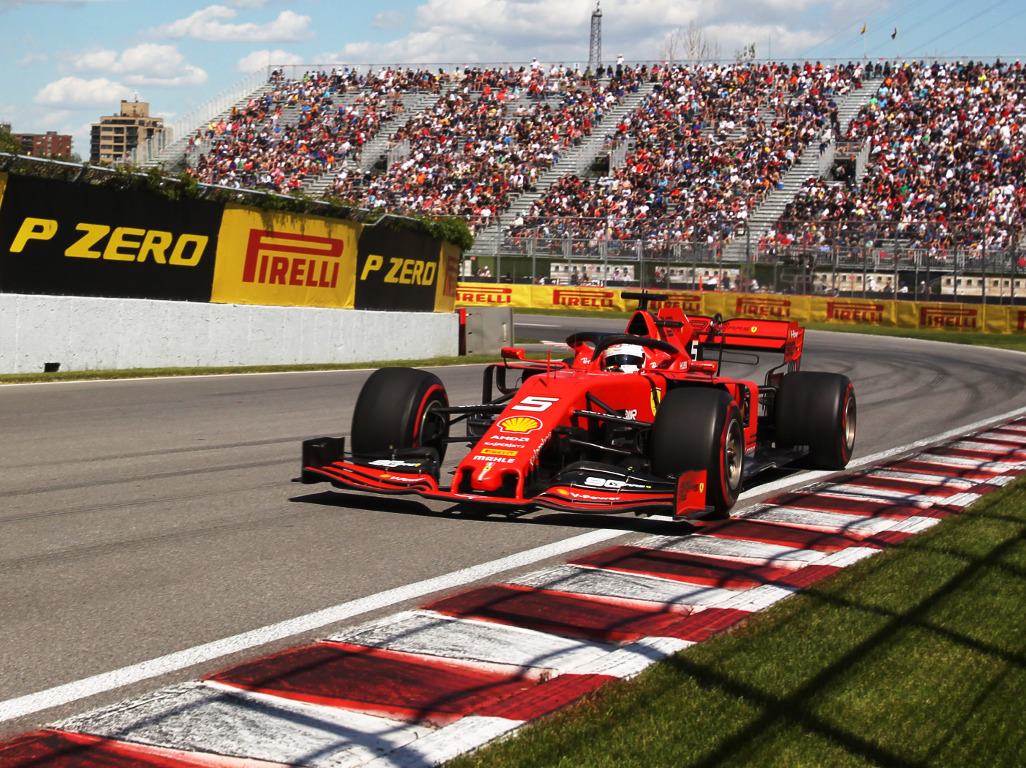 Sebastian Vettel will start the Canadian GP from pole position having set the pace in a qualifying that saw Kevin Magnussen hit the Wall of Champions.

The big question ahead of qualifying was can Ferrari convert their practice pace into a pole position – they did!

On a warm afternoon in Montreal, with the track temperature up to 48’C, Ferrari went head-to-head with Mercedes in the battle for pole position.

Ferrari led Q1 while Mercedes took over in Q2.

Lewis Hamilton set the early pace in Q3 as he went purple in the first two sectors to lead Vettel by two-tenths. Charles Leclerc was third while Bottas did not set a time as he spun on his hot lap.

Back out for a second run with everything to play for Hamilton extended his advantage with a 1:10.446.

That, though, wasn’t enough to keep Vettel at bay.

Leclerc was third while Daniel Ricciardo claimed an incredible fourth place in the Renault RS19.

Leclerc is facing a telling off at the very least for rejoining on the wrong side of the bollard at Turn 8. The stewards will investigate the incident after qualifying.

Pierre Gasly, the sole Red Bull in Q3 after Max Verstappen’s Q2 exit, was fifth ahead of the Renaults of Bottas, who had a scuffy lap.

Ferrari and Mercedes will all start the 70-lap grand prix on the medium tyres having set their fastest times in Q2 on the yellow-marked tyres.

McLaren’s Spanish driver is facing an investigation for “driving unnecessarily slowing and/or impeding” Alexander Albon at Turn 2 in Q1.  It was later confirmed that he had been slapped with a three-place grid penalty for Sunday’s race.

Q1 saw the Ferraris lead the way with the 1-2 while the only Canadian team in the field, SportPesa Racing Point, fail to progress.

Sergio Perez was down in 16th place when all was said while Lance Stroll finished 18th. It was the 11th straight race weekend in which the Canadian didn’t make it out of Q1.

Also out were Kimi Raikkonen in 17th place, his first Q1 exit since Austria 2015, and Williams team-mates George Russell and Robert Kubica, who were slowest of all.

It was Lewis Hamilton and Mercedes who set the pace in Q2 with Verstappen, who tried to qualify on the medium tyres but had to switch to the softs, down in 11th place.

And that’s where he stayed.

Kevin Magnussen came through as the chequered flag was waved, got it horribly wrong at the final corner, and hit the Wall of Champions very hard.

His car shot across the track into the pit lane wall before bouncing off that and again crossing the track to come to a rest against the wall.

His crash meant Verstappen finished 11th and was out along with Daniil Kvyat, Antonio Giovinazzi, Albon and Romain Grosjean.