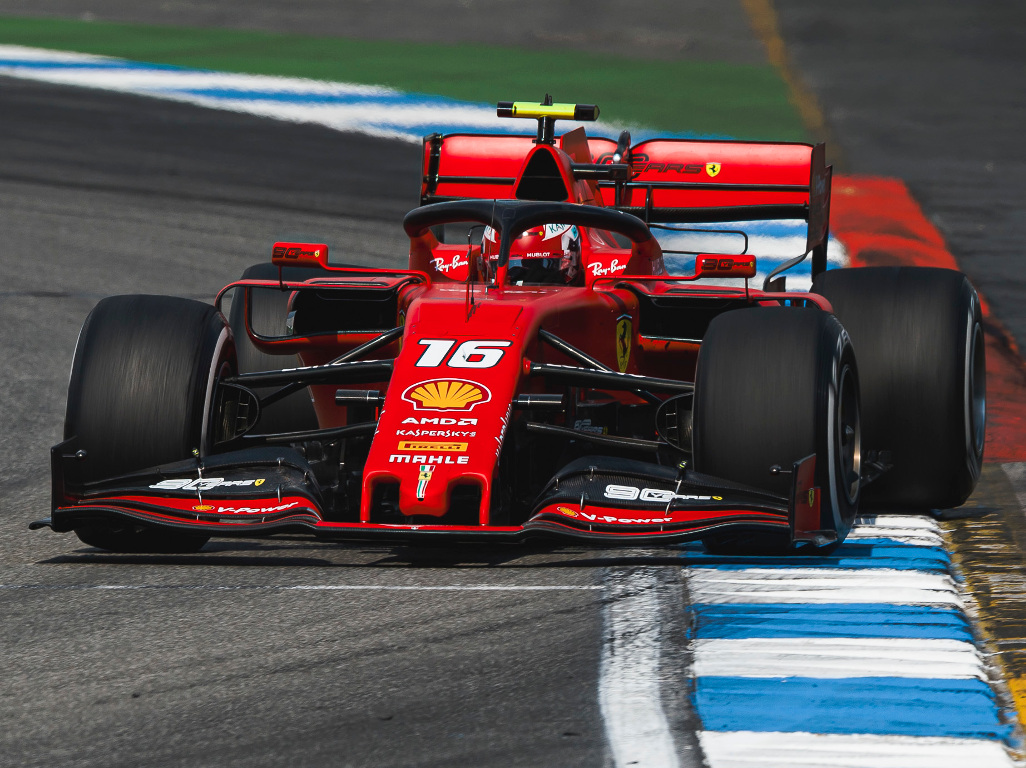 Formula 1 returned to the Hockenheimring on Saturday morning with everyone – but most notably Mercedes – welcoming the slight drop in temperature.

FP3 got off to a testy start for Mercedes, who are celebrating 125 years in motorsport. Lewis Hamilton, though, wasn’t willing to play ball with the retro kit, asking for his usual gloves: “Just give me normal gloves, normal gloves. They won’t fit.”

While he was having kit complaints, Valtteri Bottas was having track limit problems as he ran wide at Turn 2 having taken too much of the inside kerb.

Charles Leclerc, Friday’s pace-setter, was the first man into the 1:12s, grabbing P1 with a 1:12.736 which put him half a second up on his team-mate Sebastian Vettel. The German was the first to lose a lap time for exceeding track limits while Max Verstappen went third at the halfway stage.

Topping the standings at the moment is @ScuderiaFerrari once more: one-two with @Charles_Leclerc leading #Seb5 on soft tyres. pic.twitter.com/HAtOPeGLKX

Daniil Kvyat was the next driver to lose his lap time with the Toro Rosso returnee also found guilty of exceeding track limits. His team-mate Alexander Albon also fell foul.

Heading out for a second run Leclerc went purple in all three sectors on his way to a 1:12.387. Vettel, with his SF90 having undergone set up changes between runs, responded with a purple first sector but lost time in the second two to stay second, 0.257s down on his team-mate.

Bottas was the next to put in a qualy style run and jumped up to third place. He was, however, half a second down on Leclerc’s best. His team-mate Hamilton wasn’t seen out on track again until 12 minutes before the end of the session as his Mercedes underwent a bit of overhaul with the team even swapping the sidepods for slimmer ones given the cooler conditions.

Hamilton’s flying lap started well, purple in the first sector, but Mercedes had no answer to Ferrari’s mid-lap pace and he went fourth, 0.4s down. Make that seventh as his lap time was deleted for exceeding track limits. Vettel also had a time deleted, again.

Track limits are being enforced here, both Vettel and Hamilton have just had times deleted

You've got to watch out for this kerb: the cars can go onto it but no part must go *over* it, onto the green painted area 👀🚫#F1 🇩🇪 #GermanGP pic.twitter.com/32rjZbRXcc

As the deleted track times played out it was Leclerc P1 with a 1:12.380 with Verstappen second, 0.168s down, and Vettel third, a further tenth off the pace.

Bottas was fourth for Mercedes ahead of Kevin Magnussen and Hamilton. The Brit put in a second flying to go improve to within 0.6s of Leclerc.

It's not good news for @HaasF1Team as @RGrosjean tries some setting changes to stay out for the last 5 minutes of FP3#F1 🇩🇪 #GermanGP pic.twitter.com/KsH5MarAHe