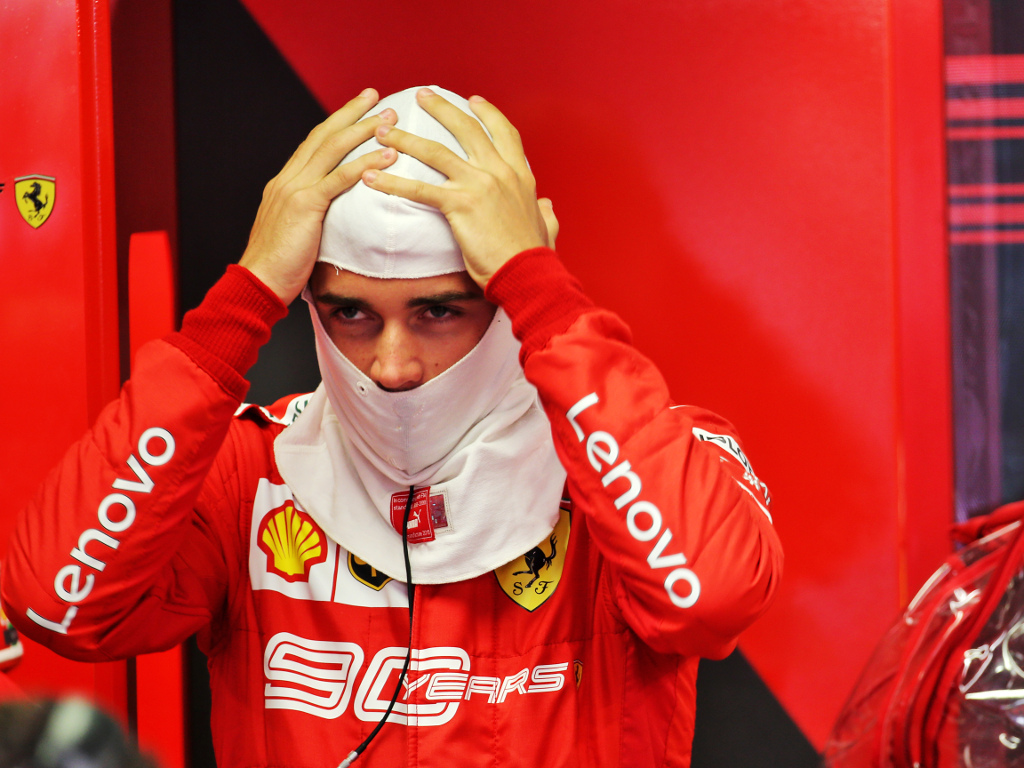 Charles Leclerc put in a late effort on the medium Pirellis to go quickest in a red-flagged interrupted first practice for the Italian GP.

Formula 1 raced into Monza on Friday morning, or perhaps best to say swam into it.

Heavy overnight rain meant there wasn’t a whole lot of action in the first 50 minutes – and what did take place was stop-started by red flags.

Kimi Raikkonen was the first to halt the session when he spun off, hitting the barrier and beaching his Alfa Romeo at the Parabolica.

A few minutes later it was Sergio Perez’s turn.

The SportPesa Racing Point driver got it wrong on his out-lap and spun at the exit to Ascari, damaging both the rear and front of the car.

Back to green, Max Verstappen took over from Daniil Kvyat as the P1 man – a 1:33.800 – only for a third red flag, this time for Pierre Gasly.

The Toro Rosso returnee spun and beached his STR14 on top of the kerbs at the chicane.

But he is already back running on track#F1 #ItalianGP 🇮🇹 pic.twitter.com/LxFoEFxlUH

FP1 resumed with 50 minutes remaining and not a whole lot of interest giving the slippery nature of the circuit.

Leclerc joined team-mate Sebastian Vettel on the list of those getting it wrong – along with Max Verstappen, Carlos Sainz, Romain Grosjean, Lando Norris and Antonio Giovinazzi – with Ferrari taking the opportunity with a quiet track to practice the tow.

Kvyat returned to P1 only to lose out to Sainz then Alexander Albon and then Leclerc. A 1:31.290 for the 2019 Belgian GP winner.

Lewis Hamilton, one of the last out, jumped up to second, 0.6s down before trying the tow with Valtteri Bottas – and cutting the corner.

Mercedes got it right on their next attempt with Hamilton going quickest with a 1:30.749. Bottas lined up second, 0.151s down.

With a dry line appearing in some parts, the lap times tumbled with Bottas, without a tow, hitting the front of a 1:30.596.

Valtteri Bottas moves into P1, ahead of Lewis Hamilton

Ferrari were the first to swap to the slicks, a few exploratory laps from Leclerc and Vettel on the Pirelli mediums with other following suit; Mercedes onto the soft tyres.

Leclerc put in a late effort on the medium slick Pirellis to go quickest, a 1:27.905, while Sainz, using the soft tyres, was P2.

Norris, Hamilton, Albon and Kvyat were next in line ahead of Verstappen, Vettel, Bottas and Gasly.