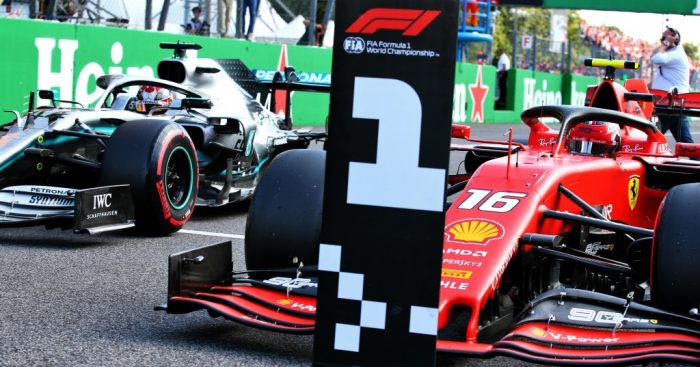 Charles Leclerc put a Ferrari on pole position at Monza, however, all the Q3 runners are under investigation as they slowed down out their out-laps and missed the cut-off.

With concerns about dangerously slow out-laps, such as what we saw at Spa, the FIA issued a minimum speed between the two Safety Car lines – a 1:45 – ahead of Saturday’s qualifying for the Italian Grand Prix.

That, though, didn’t stop the queueing with Daniil Kvyat making life a little easier for everyone else at the start of Q1 as he headed a line of cars.

Ferrari opted to head out on the mediums with Charles Leclerc going quickest, with the help of a tow from Sebastian Vettel, ahead of Nico Hulkenberg and Valtteri Bottas.

The session was red flagged with 4:34 on the clock as Sergio Perez ground to a halt, parking his SportPesa Racing Point RS19 on the inside of Curva Grande.

There was a mad dash from sixth to 20th when the session was green lighted with Ferrari even sending Vettel, P6, out on a set of soft tyres just in case.

Max Verstappen did not set a time in Q1, reporting “no power”, while his team-mate Alexander Albon was the first to lose his qualifying time but still made it into Q2.

Q2 again saw Leclerc set the early pace, this time with a 1:19.553, ahead of Lewis Hamilton and Vettel.

An off for Kimi Raikkonen meant he pitted without a lap time on the board and had to put it all on the line for his second run. He made it through.

Kimi testing the Monza Rallycross layout on an F1 weekend was very nice of him #ItalianGP pic.twitter.com/zkeQ9LDJP0

There was once again a queue of cars as everyone left it to the last three minutes to head out – traffic jam and the pursuit of the tow!

Hamilton topped that session while Leclerc made a mistake, missing the apex at the second chicane and aborting his lap. He was P2, 0.089s down.

As to be expected Q3 once again saw a tow-war with Mercedes pulling over to let Ferrari through. Vettel went ahead of everyone else, unbothered by the games, with the Renaults lining up next ahead of Leclerc, Raikkonen, Hamilton, Sainz, Bottas and Albon.

Pushing hard Raikkonen brought out the reds as he lost control of his Alfa Romeo, going backwards into the barrier at Parabolica. He jumped out of the car unaided but it was a hard hit.

Moments into Q3 and Raikkonen goes into the barriers at the Parabolica 😮#ItalianGP 🇮🇹 #F1 pic.twitter.com/60w7UqoXy8

The session resumed, however, there were no immediate takers before tow wars were again revisited. Hulkenberg got it “wrong” at the first chicane and went through the bollards in the hope that everyone would pass him – they slowed down instead.

Eventually Carlos Sainz went first ahead of the two Ferraris and Hulkenberg. But they were all in a mad dash to cross the line in time to start a flying lap. Only Sainz managed it!

As such Leclerc took pole ahead of Hamilton, Bottas and Vettel.

Ricciardo was fourth ahead of Hulkenberg and Sainz.

Albon, Lance Stroll, in Q3 for only the second time this year, and Raikkonen completed the top ten.

Every single runner in Q3 barring Raikkonen is under investigation.