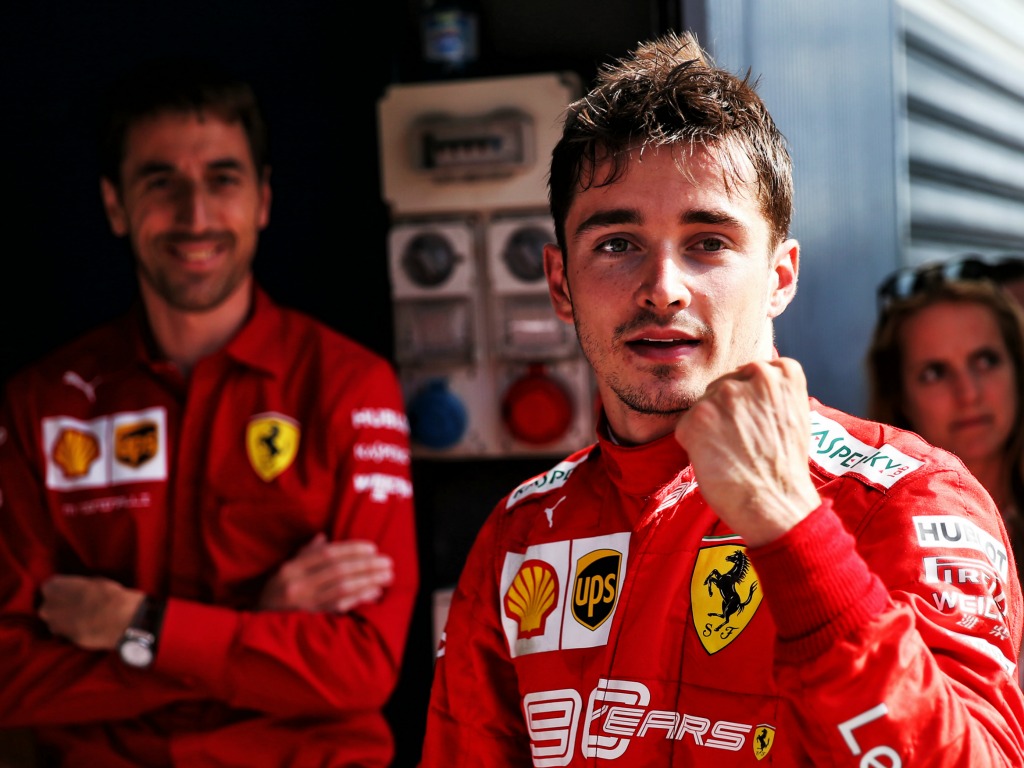 Blue skies and red grandstands greeted the drivers at the start of the 53-lap Italian Grand Prix. Hotter than expected conditions at the Temple of Speed meant there were questions about how the Pirellis would hold up.

Mercedes challenged Charles Leclerc for the lead into the first chicane but the Ferrari driver held firm, leading the race ahead of Lewis Hamilton and Valtteri Bottas. However, his team-mate Sebastian Vettel lost out to the Renault of Nico Hulkenberg.

At the very back there was carbon fibre and polystyrene boards flying all over the place as Max Verstappen, who started P19, was forced to pit for a new front wing having had a run in with Sergio Perez, who had to work his way around, but at times into, the boards in the run-off. Kimi Raikkonen and Romain Grosjean were also involved.

Max Verstappen suffers damage to his front wing, and Alex Albon is forced wide into the gravel#F1 #ItalianGP 🇮🇹 pic.twitter.com/WKE6I9COFn

Vettel recovered fourth from Hulkenberg while Alexander Albon and Carlos Sainz briefly went wheel-to-wheel for eighth, resulting in an off-track excursion for the Red Bull rookie. Hulkenberg next fell victim to Daniel Ricciardo, who easily powered past his fellow Renault driver to run fifth.

Seven laps in the dream of a Ferrari 1-2 ended as Vettel spun all by himself. He returned to the track in an unsafe manner, hitting the Racing Point of Lance Stroll in the process. “He came back on the circuit like an idiot!” was Stroll’s very apt assessment. Stroll then did the same to Pierre Gasly, also an unsafe return.

Vettel pitted for a new nose, falling to P20, while Stroll was left with a damaged front wing but continued. Both drivers were investigated and penalised 10-second stop-go penalties.

Vettel took his penalty on lap 14, coming out a lap down on race leader Leclerc. But at least one Ferrari was having a solid day with the Monégasque driver leading the race by just over a second ahead of Hamilton. The Brit, though, told Mercedes he thought the Ferrari was “struggling”.

Stroll was handed a drive-through penalty dropping him to P17 for his unsafe return while the stewards also announced that Kimi Raikkonen was under investigation for starting on incorrect tyres.

He made it into Q3 on Saturday so he was meant to start on the tyres that he used in Q2, however, given his pitlane start, Alfa Romeo put him on the wrong tyres. He was hit with a 10-second stop-go penalty. Raikkonen fell to 18th when he took his penalty.

Alexander Albon joined the naughty boy list, handed a five-second penalty for gaining an advantage by going off the track in his battle with Kevin Magnussen.

Mercedes were the first to blink, going for the undercut as Hamilton came in on lap 20 swapping to mediums. A lap later Leclerc was in having told Ferrari “rear tyres are gone”. He went with the hard tyres and came out just ahead of the fast-approaching Hamilton, the gap halved to 0.6s. Bottas was leading ahead of the two Renaults of Ricciardo and Hulkenberg.

Leclerc attacked Hulkenberg through Parabolica, firing his way past with Hamilton following suit a corner later. He then attacked the Ferrari driver, coming inches away from his rear wing. Leclerc refused to give way and Hamilton was forced wide, complaining about Leclerc not leaving him a “car’s width, he pushed me off”. The Monaco driver was shown the black-and-white flag for his antics.

Halfway through the grand prix Leclerc and Hamilton’s next attack was on the second Renault of Ricciardo, both easily sliding by with Leclerc maintaining his one second advantage over the Mercedes driver. Bottas relinquished the lead on lap 28, swapping to the medium tyres and falling back to fourth place. His tyres seven laps younger than Hamilton and Leclerc’s.

McLaren’s troubles continued at Monza as Carlos Sainz was left with a loose front right wheel that meant he had to come to a halt as he left the pits. The first retirement of the grand prix. The VSC was waved.

As soon as the VSC was lifted Hamilton, on the mediums which warm up faster than the hards of Leclerc, closed right up on the Ferrari driver, looking to attack for the lead. Leclerc was able to stay ahead as one by one the Renaults finally came in for their pit stops, first Hulkenberg and then Ricciardo. The latter took advantage of another VSC, this time for Daniil Kvyat who stopped just past the exit of the first chicane.

On lap 33 of 53 Vettel’s afternoon went from bad to worse as he was shown the blue flags for the approaching race leaders, Leclerc and Hamilton. He was lapped having earlier unlapped himself when the leaders pitted. Adding to his misery he was then challenged, and for a few metres it was touch-and-go, by the Williams of George Russell.

Although always in touching distance of Leclerc, Hamilton just wasn’t able to get close enough to challenge. “I need more power, man!” he told Mercedes. Leclerc locked up and cut the chicane, mounting the kerbs and leaving bits of floor in his wake. The mistake put Hamilton right on his rear wing but again he wasn’t able to get the final metres. Hamilton was not happy with Leclerc’s driving.

Leclerc locks up into Turn One under pressure from Hamilton, and misses the apex

He recovers back onto the track and stops the championship leader from overtaking on the outside#F1 #ItalianGP 🇮🇹 pic.twitter.com/M5gNyit2Te

“Some dangerous driving going on here,” Hamilton said. Leclerc was warned by his team not to “move under braking at Turn 4”, letting the 21-year-old know he was walking a fine line. And all the while Bottas was closing in on the two with his fresher tyres. Hamilton got it wrong at Turn 1, letting his team-mate through into second.

Lap after lap Bottas dogged Leclerc, making up ground through the corners only to lose it down the straights. After 53 laps of constant pressure Leclerc took the chequered flag for Ferrari, the Scuderia’s first home win in nine years.

Bottas was second with Hamilton completing the podium ahead of Ricciardo and Hulkenberg. The Brit came in for a late stop, putting on fresh soft tyres and taking the fastest lap point.

Albon was P6, finishing ahead of Perez and Verstappen, who started P18 and P19 respectively.

Antonio Giovinazzi scored at his home grand prix, P9, ahead of Lando Norris.