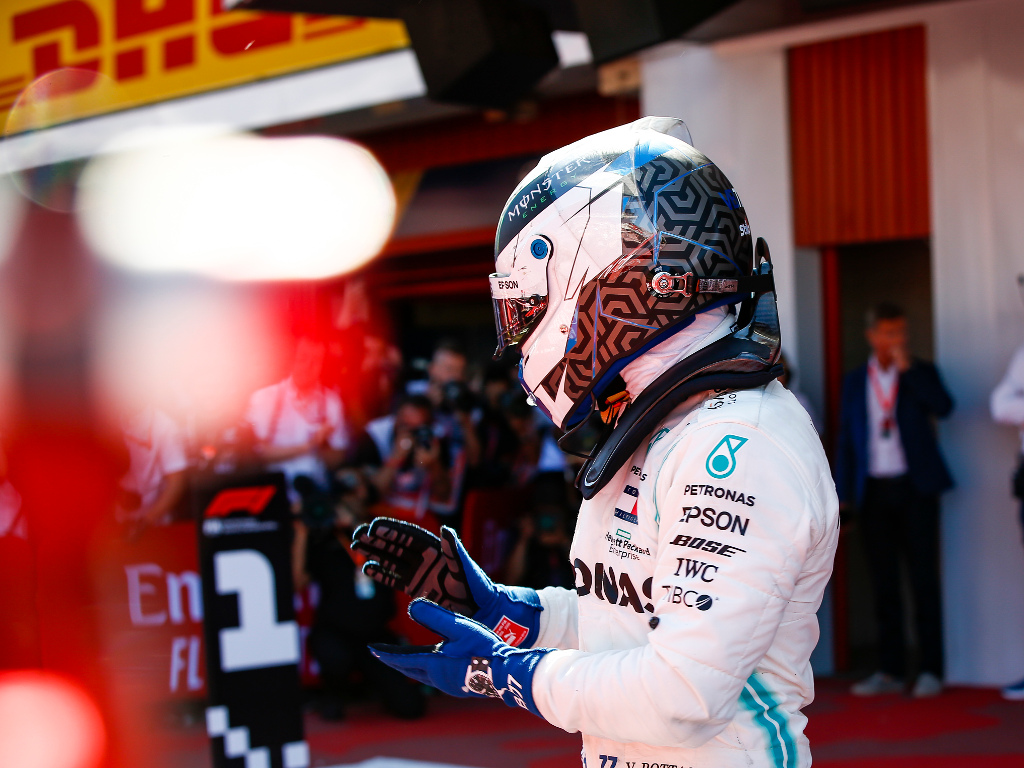 Valtteri Bottas returned to winning ways at the Japanese GP, taking the chequered flag ahead of Sebastian Vettel while Charles Leclerc took Max Verstappen out of the fight.

After an early morning start for qualifying, the 53-lap Japanese Grand Prix was part two of Sunday’s action at the Suzuka circuit. And, like qualifying, it also got off to a chaotic start.

Vettel, starting from pole position, appeared to move on the grid making for a jumped start. He was then slow to get going allowing P3, Bottas, to storm into the lead.

He didn’t pit telling Ferrari he wants to “continue a little bit more”. He was told to “box” but replied by saying that the “car doesn’t feel bad but probably looks bad”. It did look bad and, after two trips past the pit entrance, finally pitted for a new wing handing third place to Lewis Hamilton.

LAP 1/53: Bottas gets a brilliant start and leads!

Drama behind as Verstappen and Leclerc tangle, and the Ferrari man tells the team his car has damage#JapaneseGP 🇯🇵 #F1 pic.twitter.com/JlW0yNLTbL

Hamilton was perplexed as to why Leclerc “not been given a warning flag” while Verstappen complained that “he just went straight into my car!” In a strange move the stewards ruled no investigation only to announce laps later that there would be, but after the race.

The verdict was two separate time penalties for Leclerc and a fine, which demoted him to P7 behind Daniel Ricciardo.

Red Bull’s woes continued a few laps later when Alexander Albon and Lando Norris traded bodywork as the Red Bull driver tried to pass, didn’t leave space, and the two collided pushing Norris off the track. The McLaren rookie had to pit as his brakes were overheating thanks to debris from Leclerc’s Ferrari.

“Keep it coming, this is good stuff” was the message to Bottas as he eked out a four second lead over Vettel.

There was some good news for Ferrari as the stewards declared no action against Vettel as he never crossed the line when he made his momentary move on the grid. The bad news for Red Bull fans is that Verstappen became the first retirement of the afternoon, parking his RB15 on lap 15 due to crash damage.

Vettel was the first of the top ten to pit, boxing on lap 17 and swapping his softs for a fresh set of softs. Two stop strategy for the German then. Bottas stopped a lap later, swapping to the medium Pirellis. Hamilton led the race.

Hamilton stopped on lap 22, swapping softs for mediums. He came out P3, 22 seconds behind race leader Bottas and 11 behind second placed Vettel. He asked the team to “please explain” why he had lost so much ground on the leading duo.

LAP 31: With the field having made their first stops, we currently sit P6 with @PierreGASLY and P17 with @kvyatofficial #F1 #JapaneseGP 🇯🇵 #f1jp pic.twitter.com/pJE2RbkyjA

With his two-stop strategy in play Vettel pitted on lap 32 for medium tyres, coming out 20s behind Bottas, who still had to stop, and seven adrift of Hamilton, who did not. Bottas did his second stop on lap 36 coming out eight seconds behind Hamilton.

But while it initially looked as if this was Bottas’ race, the Finn was not able to catch Hamilton despite running fresh tyres. Instead of closing the gap, Bottas fell off the pace tenth by tenth. He was 9.2s down five laps after his stop

Mercedes told Bottas that “Lewis still has to stop”. Bottas replied: “Are you sure Lewis will stop?” He was told “he will.” He did, stopping on lap 42, dropping to third behind Vettel.

While Bottas raced towards the victory, Hamilton closed the gap on Vettel to run within DRS with five to go.

Ferrari gave Vettel “more performance” to keep Hamilton at bay as the reigning World Champ looked inside and outside for a way through. Hamilton too asked for “more power”. It wasn’t enough.

Bottas took the chequered flag, his first win since April, while Vettel was second ahead of Hamilton. Hamilton also claimed the fastest lap point to hand Mercedes the Constructors’ title.

Albon bagged a career-best P4 ahead of Sainz, Ricciardo and Leclerc, who was subsequently demoted to P7 due to to two post-race penalties. Gasly, Hulkenberg and Stroll completed the points.

Sergio Perez crashed on the final lap of the grand prix but was still classified P17…that was all until it was confirmed that the chequered flag was shown in the data a lap early due to a technical glitch.

That put Perez back to P9, knocked Hulkenberg back to P10 and Stroll dropped out of the points completely in P11.