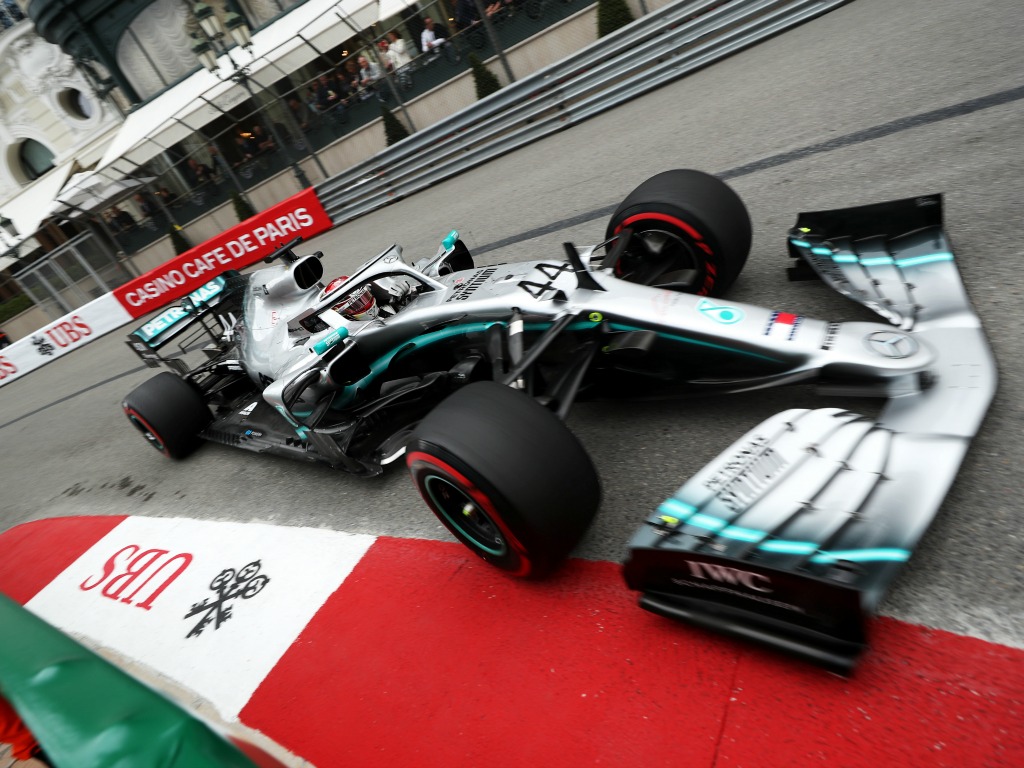 Lewis Hamilton set the pace in Monaco on Thursday morning in a practice session that saw the top three separated by 0.072s and both Haas cars black flagged.

Many of the cars carried tributes to the Austrian as they took to the street circuit on Thursday morning, the traditional start of the Monaco weekend.

Williams were first out and, for one brief moment, held the 1-2 only for championship leaders Mercedes to venture out for their first run of the day.

While the Mercedes drivers continued to lay down fastest laps there was drama further down the pit lane as Romain Grosjean’s Haas was black flagged.

Moments later, so too was Kevin Magnussen’s car.

It was initially thought the black flag could be related to the Rich Energy copy right case, however, Haas revealed it was because of telemetry and radio problems.

The team explained: “Telemetry and radio issue – we can’t communicate with drivers. FIA stepped in so we could get cars back to pits as pit boards weren’t doing the business.”

It looked to be a bigger problem than just the cars as Haas’ entire network system failed. They eventually got the cars back on track for the final 15 minutes.

Back at the front Hamilton laid down a 1:12.932 to lead the way at the 40-minute mark by half a second over Red Bull’s Max Verstappen while Bottas was third.

Carlos Sainz, meanwhile, was stuck in the pits as McLaren worked on a suspected battery problem.

He came out late in the session to do a single lap, bringing his tally for FP1 to two laps.

Electric problems for Sainz related to battery. FP1 could be already done for him with only one lap. pic.twitter.com/m7qctcudAg

Ferrari were the first out after a brief break with Charles Leclerc moving up to second place, 0.05s down, while Sebastian Vettel went third, a further 0.06s off the pace.

That gap, though, quickly grew as Hamilton and Bottas regained the 1-2, a 1:12.106 for the reigning World Champion.

That ensured Hamilton finished first practice up in P1 while a late run for Verstappen claimed second place.

Max is taking the fight to Mercedes 💪

It wasn’t a perfect session for the Red Bull driver as not only did his RB15 fall off the jack in the pits, landing heavily, but he also got it wrong at Mirabeau and could not find reverse. The marshals were quickly on hand to push him back onto the track.

Leclerc and Vettel fought over fourth place with the Monaco driver winning that battle with a 1:12.467, 0.35s faster than Vettel’s best.

Nico Hulkenberg was sixth ahead of Pierre Gasly, Magnussen and Kimi Raikkonen.

There weren’t any major on-track incidents in FP1 with Robert Kubica the first man to kiss the barrier as he spun and tapped the wall while Lando Norris visited the Sainte Devote run-off area.

A half spin and cheeky kiss of the barrier for #RK88, so he boxes just to check everything over. #MonacoGP 🇲🇨 pic.twitter.com/311qAKVpnP

Hamilton had a brief battle with Daniil Kvyat as he chased down the Toro Rosso before harassing him to get by. He did so when Kvyat got it wrong at Sainte Devote.

Leclerc was handed a 300 Euro fine for speeding in the pit lane.

Williams were not slowest of all, for the first time in a practice session for this season, as that went to Lance Stroll. However, the Racing Point driver spent his FP1 on the slowest hard tyres.