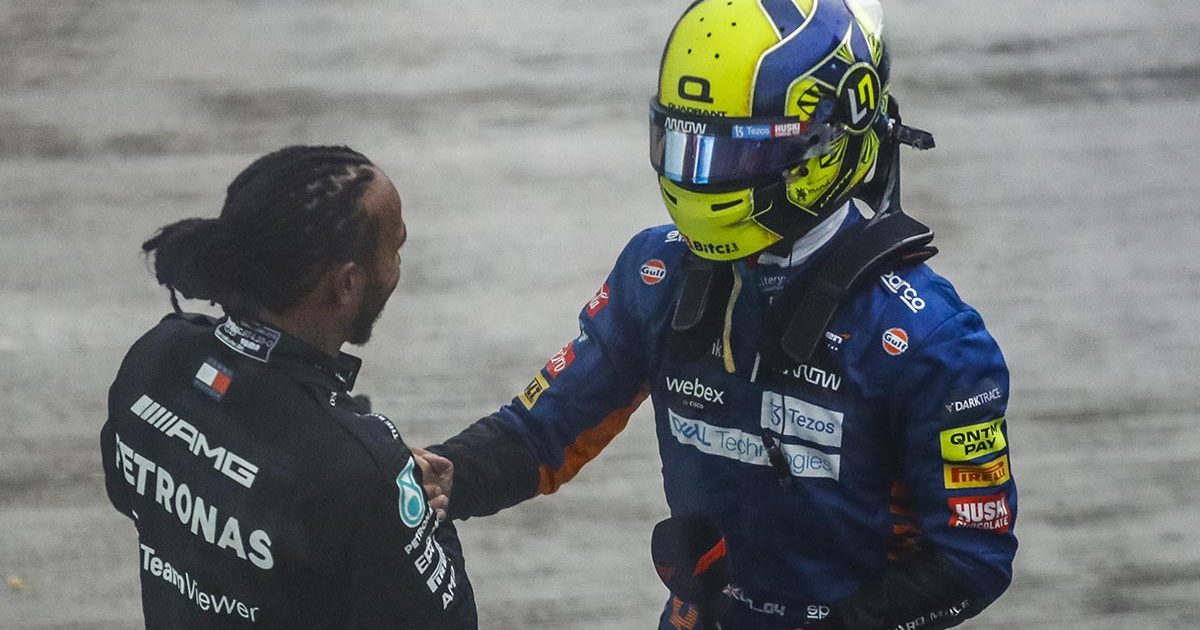 Lewis Hamilton won a race he just couldn’t afford to lose in his title tussle with Max Verstappen, but he had to break Lando Norris’s heart to do it. Here are our conclusions from a Russian Grand Prix that actually delivered.

Lando shoots for the moon, becomes a star

If Lando Norris was disappointed that it was Daniel Ricciardo and not him who ended McLaren’s nine-year winless run in the Italian Grand Prix, he didn’t show it.

Despite being at the centre of everything good about McLaren until that point of 2021 only to see the other driver take the crowning glory, Norris had the emotional intelligence to recognise the significance of collective success and celebrated his team-mate’s triumph as if it were his own.

That dignity in defeat, you suspect, came from being safe in the knowledge that he – as a fast, urbane and authentic racing driver – represents everything Zak Brown wants the modern McLaren to be and that his time would come.

Few would have expected his time to come quite so soon.

His first pole position was a milestone achievement but barely a surprise given how hard he had pushed the frontrunners on Saturdays at Imola, Austria and Spa earlier this year, not only a reflection of his confidence in the MCL35M but his natural touch and feel behind the wheel.

Having easily reclaimed the lead from his former team-mate Carlos Sainz on Lap 13, Norris – just like Max Verstappen and Charles Leclerc before him – looked totally at home running at the front of the field despite his tender age, but always with a watchful eye on the real threat: Lewis Hamilton.

It was fitting that the fight for the win was between Norris and the seven-time World Champion, for Norris has always carried himself on and off track with a natural ease and effortlessness – call it the serenity of a superstar – that marks him out as the Lewis Hamilton of the next generation.

And had the rain not arrived, there was every reason to believe Norris – unflustered and quick in all the right places, most notably the final sector where he could deny Hamilton the use of DRS on the main straight – would have held on to take his maiden F1 victory.

But it did, and it was here where the difference in experience between the two products of McLaren’s driver academy and their respective teams became apparent.

McLaren have often referred to themselves as a “young team” since rebuilding under the guidance of Brown and Andreas Seidl in 2019 and, as the rain intensified, what Norris needed most was someone on the pit wall with the gravitas, leadership and courage to overrule his calls to stay out and weather the storm.

By the time they realised it was already too late, Norris struggling to stay on track and falling to seventh at the flag as Hamilton – with total faith in Mercedes and all their data after years of success together – disappeared into the distance on intermediate tyres.

For the second week running Lando – this time visibly upset – reached out to the race winner, interrupting Hamilton’s post-race interview in parc ferme to offer his congratulations with typical charm and grace.

He shot for the moon and missed, but has landed among the stars.

Hamilton gets the job done as Verstappen limits the damage

With Red Bull treating Max Verstappen’s three-place penalty from Monza as a perfect opportunity to introduce his fourth power unit of the season, the Russian GP – at least on paper – had the air of an intermission in the 2021 title fight.

While Max would mount a recovery from the back of the grid with a hopeful eye on the podium, Lewis Hamilton would be left with a clear path to victory at a circuit where Mercedes have been untouchable since 2014.

Keeping the two protagonists apart for the weekend, it was thought, would also have the effect of extinguishing any lingering resentment from their race-ending collision in Italy before battle recommenced in Turkey.

Not for the first time this year, however, Hamilton flirted with wasting the opportunity handed to him, with his performances across the opening two days at Sochi uncharacteristic to the point of being unrecognisable.

Were these mistakes yet more examples of him feeling the strain? Possibly. But taking out a front jack man in Friday practice and crashing at the entrance to the pit lane in qualifying were not exactly typical of a driver – never mind a seven-time world champion – cracking under pressure.

Indeed, it was tempting to think back to July’s Hungarian GP, where a visibly exhausted Hamilton revealed he had been struggling with long Covid all year. Was this perhaps manifesting itself in Russia as a lack of concentration?

In any case, Hamilton was fortunate to remain fourth on the grid having been slow to recognise the requirement for dry tyres in the closing minutes of qualifying, and his fall to seventh on the opening lap – when he was unable to utilise the tow to Turn 2 – seemed to follow the pattern of his season.

Even in the laps before the rain hit, as Hamilton tracked Lando Norris while Verstappen was stuck in seventh behind cars on faster tyres, the prospect of finishing second in a race he simply couldn’t afford to lose was almost inconceivable.

Yet the Hamilton-Mercedes machine can never be discounted, and the arrival of the rain – the sort of slippery conditions in which Hamilton hardly ever loses – tipped the balance decisively in their favour.

Fifteen races down, *still* just two points separate the champion and the challenger.

At this stage of the season, getting the job done is all that matters and Hamilton’s 100th grand prix victory, his fifth of 2021 and his first since Silverstone has given him a two-point lead over Verstappen in the drivers’ standings with a maximum of seven rounds remaining.

But what must have gone through Lewis’s mind in parc ferme when he looked up and saw Max heading towards him, arm outstretched for their usual post-race fist bump, having danced in the rain to finish second from 20th on the grid?

Ever get the feeling your name’s on the World Championship trophy? After this, Max just might.

This was the penultimate Russian Grand Prix to be held at Sochi, with the event set to be moved to St Petersburg’s purpose-built Igora Drive circuit from 2023.

The switch, announced at the end of June, marked the beginning of the end for a deeply unloved track lacking variation, elevation, character and pretty much everything else you would hope and expect from a grand prix venue.

Not since the days of the Valencia street circuit, another of Hermann Tilke’s works of art, has a track been so universally loathed.

In truth, despite the promise of the long, winding Turn 3 becoming one of F1’s most iconic corners, Sochi’s striking similarities to Valencia – all those 90-degree turns, that high-speed kink leading into a heavy braking zone towards the end of the lap – counted against it from the very start.

Yet at least Valencia had the decency to bow out with a bang and deliver an instant classic for its final race in 2012, when Fernando Alonso won from 11th on the grid and Michael Schumacher claimed the final podium of his storied career.

It was a race so exciting, in fact, that for a fleeting moment you wondered why F1 was leaving Valencia at all… and then you remembered.

On the evidence of this weekend, it seems Sochi is once again following in the footsteps of its older sibling by making up for seven years of misery.

The prospect of each of the leading cars starting out of position guaranteed a different kind of Russian Grand Prix, and although there were one too many DRS trains – a function of 2021-style F1 as much as the circuit itself – the intervention of rain so late in the day produced arguably the most exciting climax the sport has seen to a race since its zenith in Brazil in 2008.

And it offered a reminder that there’s nothing wrong with a grand prix circuit that a simple drop of rain cannot solve.

We never thought we’d say this, but roll on Sochi 2022…just bring the rain with you one last time.