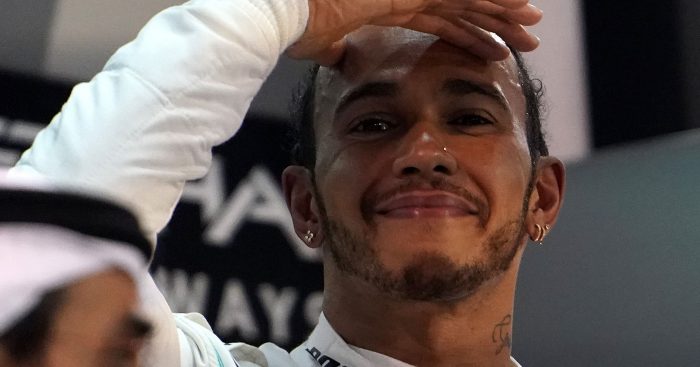 Lewis Hamilton topped the Abu Dhabi Grand Prix driver ratings with one final masterclass in 2019; plus plenty of strong displays from the midfield.

For one last time this season, Late Braking cast their beady eye over the grid at the Yas Marina Circuit.

Lewis Hamilton – A crowning race on an epic season. Lewis Hamilton finished off 2019 in style as he secured pole position, fastest lap, race win and led every lap along the way. A Grand Slam to add to an already mightily successful season.

Hamilton and Mercedes proved untouchable on the day as they made their advantage count in the final sector and managed their rivals in the first two. It ended up being a 16.7 second victory for Hamilton on a day he hardly needed to get out of second gear. 10

Max Verstappen – A solid day for Verstappen who can look at the result and be satisfied knowing that was the best he could have hoped for. On the day, Mercedes proved a little too much to handle but he can be happy with how he saw off the threat of Leclerc.

There were concerns for a time as Verstappen spoke of car issues following his one and only pit stop but he remained quick throughout to claim third in the championship. 8

Charles Leclerc – After four races away from the podium, Leclerc bounced back in Abu Dhabi as he finished as the best two-stopper in the field.

Leclerc got off to a lightning start on the soft tyres but having to pit earlier than his two rivals cost him and he eventually pitted twice.

After a brilliant spell just after the summer break, Ferrari’s race pace has dropped off towards the end of the year, Leclerc will be hoping that turns around come March. 8

Valtteri Bottas – Coming from the very back of the grid is never an easy task, even when you have the best car on the grid as Bottas did. The loss of DRS for the first part of the race might have hindered his progress slightly but the Finn kept his cool.

Bottas timed his moves to perfection and avoided any disastrous scenarios. Bottas’ approach to overtaking can often be seen as conservative and patient but it has its benefits and he was justly rewarded. 9

Sebastian Vettel – Ups and downs for Vettel across 2019 and unfortunately this one belongs to the latter. Trailing narrowly to his teammate, Vettel was the victim of a poor Ferrari double-stacking effort, he then got stuck in a group behind Hulkenberg and never recovered from there.

2019 marks the first time Vettel has lost to a teammate when basked in red, he’ll look to turn that around in the new year. 6

Alex Albon – The start of Albon’s Red Bull career has featured encouraging signs but Abu Dhabi was not a good way to end as he was woefully off the pace. Finishing 53 seconds behind his teammate in 55 laps, he failed to keep pace with the other top runners.

At the end of the day, Verstappen managed to beat both Ferraris and Bottas, whereas Albon lost to all three. 5

Sergio Perez – Vintage Perez once more as he performed his trademark long first stint that focused on tyre preservation before making some clinical overtakes in the second half of the race. The result means Perez ticks over the 50 mark for the season, a solid total considering the car’s shortcomings in qualifying. 8

Lando Norris – A strong end to the season for Norris as he secured the qualifying head-to-head against his teammate and then beat him in the race by two positions.

Others around him came into the pits as their tyres struggled but Norris persevered and only gave up one position to Perez. 8

Daniil Kvyat – Outside of the Williams drivers, Kvyat was the only driver to start the race on the hard tyres. As the McLaren and Renault drivers came into the pits early on, Kvyat went all the way to lap 40 before making his stop. He then picked up positions as other drivers’ tyres fell away. 8

Carlos Sainz – Results around him meant he only needed one point to secure 6th in the championship and he did so with a gutsy late braking overtaking move on Hulkenberg on the final lap.

Daniel Ricciardo – Undercutting the early pit stops of the McLaren duo, Ricciardo found himself in a race-long duel with the McLaren guys but he failed to beat either as he slipped out of the points, nonetheless Ricciardo has had a solid first year with the team, even if the car hasn’t been what he might’ve expected. 7

Nico Hulkenberg – In potentially his last F1 race, Hulkenberg was unable to walk away with points as he lost P10 on the final lap.

Operating a different strategy to his rivals, Hulkenberg was seemingly in a good position to finish best of the rest but he couldn’t make his way past Norris, at which point he likely would have formed a gap. At least the fans gave him driver of the day. 7

Kimi Raikkonen – After their best team result of the year in Brazil, it was a crash back down to earth for the Alfa duo as they struggled all weekend long. Raikkonen did at least put up more of a fight to come home P13. 7

Kevin Magnussen – Magnussen quite possibly got his best start of the year as he soared up by five positions on the opening lap. Whilst he did his best to keep cars behind him, they all eventually got by although an 18 second win over his teammate is impressive. 6

Romain Grosjean – After qualifying on Saturday, Grosjean spoke about the VF-19 and being less than reluctant to say goodbye to it. After another dismal race on Sunday, he can now draw a line under 2019 and focus on next year. 5

Antonio Giovinazzi – It’s been an improved second half of the season for Giovinazzi although this one isn’t going to be included in his highlights reel. A two stop race resulted in a distant 16th place, three positions and 46 seconds behind his teammate. 5

George Russell – It’s been a tough season for Russell who ends the year as the only driver not to score points although there is little question as to who has been the better Williams driver this year. A 21-0 record in qualifying might be small consolation but it’s those small victories that you have to take in his spot. 7

Pierre Gasly – With a chance of P6 in the championship, Gasly’s fate was out of his hands from the off as he was involved in a first corner incident that saw him dive into the pits after the opening lap.

No safety car meant no chance of recovery as he spent the rest of the race in relative obscurity. 5

Robert Kubica – The comeback season for Kubica might not have brought us the challenger of years gone by but it’s the fact he even made it to the grid in the first place that deserves recognition and praise.

The race itself was largely par for the course, Kubica led Russell early but quickly fell behind, never to get close again. 5

Lance Stroll – The one and only retirement from the race, Stroll pit after just five laps after involvement in the first corner incident. There was no coming back from there as Stroll was near-last by the time they called it a day. 5

The Abu Dhabi Grand Prix driver ratings are brought to you by the good folks at Late Braking. You can check them out in the following places: