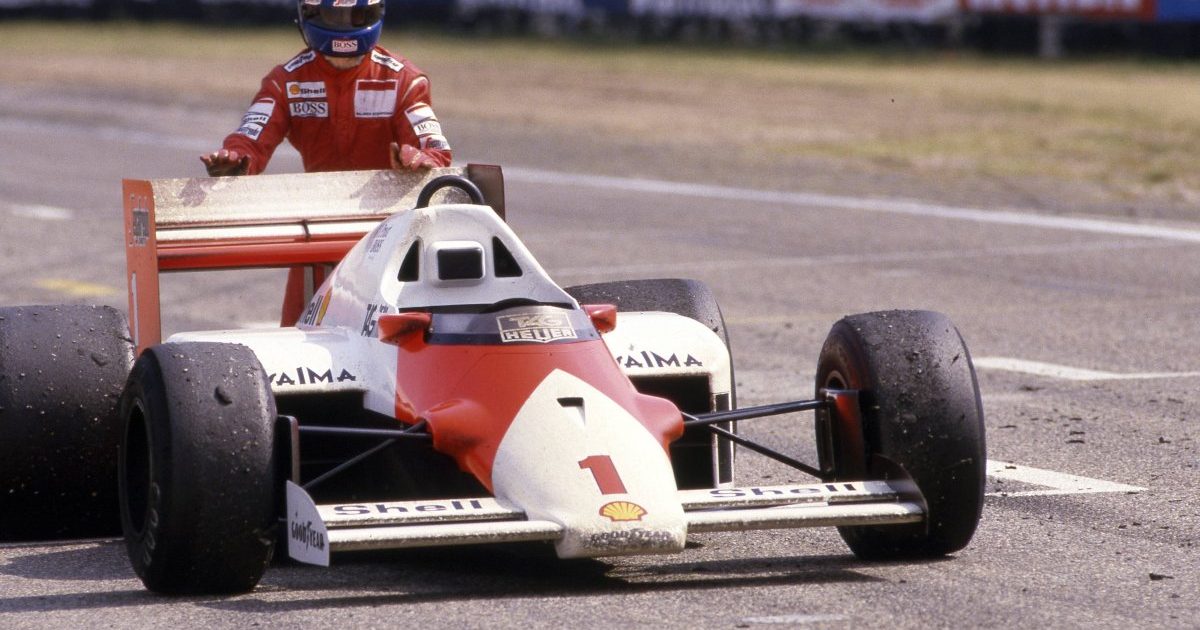 On Alain Prost’s 66th birthday, join us as we take a look back at what was perhaps the greatest of his many triumphs.

There is, of course, no right answer to what the greatest F1 season ever is, but you can be sure the 1986 campaign will be a part of the conversation.

It saw four true greats of the sport go head-to-head in a titanic battle for the title and against all odds, The Professor prevailed.

Prost headed into the season as the man to beat after finally becoming World Champion in 1985 following narrow, heartbreaking defeats in the two previous years.

However, no man had successfully defended their crown since Jack Brabham in 1960 and it quickly became clear the Frenchman faced an uphill task to do so.

In the humid and heavy heat of Rio de Janeiro, he had a nightmare of an opening round, qualifying his McLaren down in P9 before retiring from the race with an engine failure. To make matters worse, the Williams of Nelson Piquet won the race and the Lotus of Ayton Senna claimed P2. Both cars looked much quicker than the car Prost had at his disposal.

Nevertheless, he got his title defence up and running two races later at Imola, squeezing every last drop of potential out of his car. Literally.

After starting in P4 behind Senna, Piquet and Nigel Mansell, he quickly gained a place thanks to an engine problem for the Briton before passing Senna with an aggressive move.

Soon afterwards he lost P3 to his team-mate, Keke Rosberg, and had no intention of getting back ahead. In the Finn’s tow, he could keep up while saving his tyres and, crucially, fuel. After all, at the same race the previous year, he had crawled over the line running on empty to take the win but was then disqualified.

Poor stops for Piquet and Rosberg gave Prost the lead, and with the fuel he saved he cruised off into the distance. However, it looked like history would repeat itself when he began to slow down with three corners of the race to go but, rather brilliantly, he swerved back and forth to get the last few drops into the pickup and made it to the end.

He followed that up by winning in Monaco, for the third time in a row, in far less dramatic circumstances as he started on pole and dominated from the first lap to the last.

The back to-back wins had given him the lead in the standings but, going forward, he simply did not have the car to fight for wins on a regular basis and, being well aware of this, prioritised keeping things clean.

He executed his strategy perfectly, finishing on the podium in four of the next six races and even trying to push his car across the line in Germany after it came to a halt on the final lap.

However, it all looked to be for nothing when an accident in Hungary put him out of the race and down to P4 in the standings. Prost got himself back into contention with victory in Austria before his chances were dealt another big blow at Monza where he was disqualified for changing cars.

With just three rounds left, he trailed both Williams drivers and had Senna breathing down his neck with better machinery.

In Portugal, the Lotus dropped out of the title fight when, running in P2 behind Mansell, Senna ran out of fuel on the final lap, handing Prost the position. The Frenchman then finished in the same place again in Mexico with one of his best drives ever.

“We always had a lot less power than the Williams-Hondas but this time – to make it worse – he was on five cylinders for half of the race and didn’t dare to make a second tyre stop for fear of losing the engine.

“On a very abrasive track, he had to make two sets last the whole race – Mansell needed three and Piquet four. Alain finished ahead of both of them.”

He entered the season finale in Australia one point ahead of Piquet but six behind Mansell, who needed only to finish P2. What came next was one of the sport’s most dramatic races ever and arguably Prost’s finest hour.

As had been the case all year, the best he could do in qualifying was claim the “best of the rest” tag behind Mansell, Piquet and Senna. Being over a second off pole, the chances of him becoming a double World Champion looked slim. Even so, he was feeling good.

“Ha! Three guys ahead of me – and they all hate each other!” he said.

Things went exactly as he hoped at the start of the race as, while those ahead squabbled, he got away excellently and was up to P2 by lap 23. What’s more, the man leading the race was his team-mate Rosberg, meaning team orders could be issued and he could take the win. Happy days.

Nine laps later though, Prost sustained a puncture and had to pit. With Mansell and Piquet planning not to come in, he was forced to throw his usual calm and calculated approach out of the window.

“After that, all I could do was push as hard as possible. There was nothing to lose – even second place was no use to me,” he recalled.

Push he did, and with just under 20 laps to go, he had caught and passed Mansell as Rosberg retired with a puncture of his own. Even so, the Briton was running comfortably in P3 and looked all but certain to claim the title. Then disaster struck. Mansell’s tyre burst and his hopes of becoming World Champion with it. He was out.

All Prost had to do now was take the lead from Piquet, and Williams could not have made it any easier for him. Fearing the Brazilian would suffer the same fate as their other driver, they called him in. He gave it his all in the closing stages but could not catch the McLaren man.

Prost crossed the line four seconds clear of Piquet and clinched the title with four points more than him and two more than Mansell.

He had gone up against three all-time greats, all of whom had better cars than him, and had beaten them all nonetheless.

As with many things in Formula 1, his achievement is best summed up by the words of Murray Walker, spoken as the late carnage of the finale kicked off, but equally applicable to the season as a whole.

“If this isn’t a sensation, I would like to know what is.”