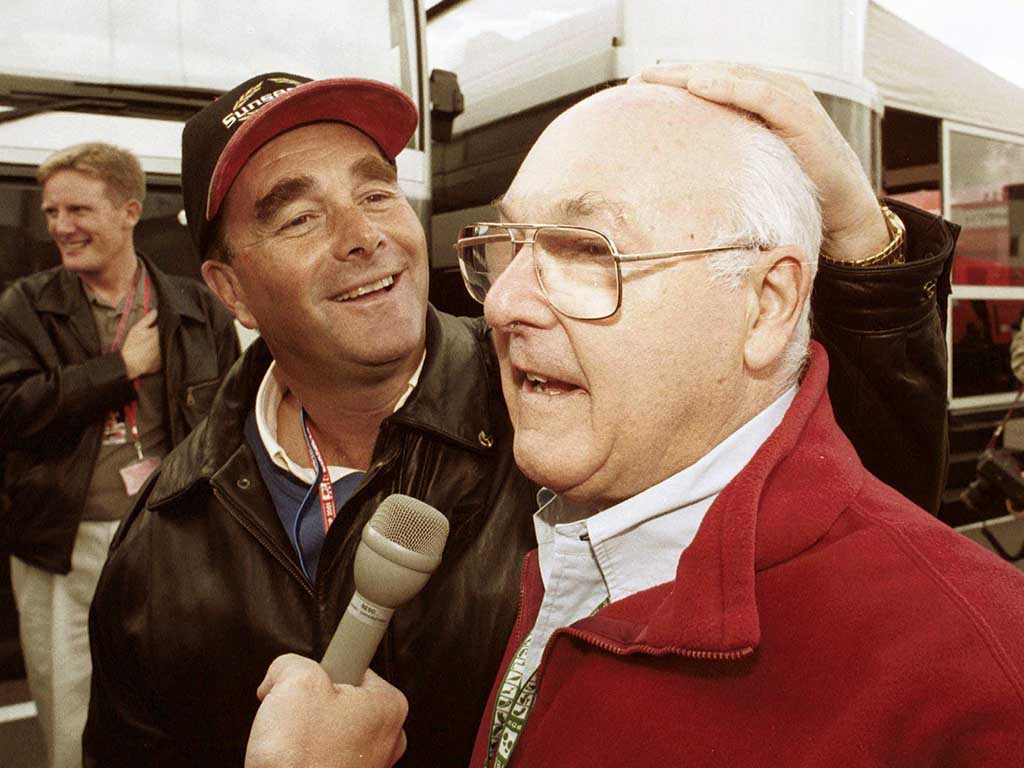 The BBC is only broadcaster to have been involved with F1 since the inception of the World Championship, bringing fans the first-ever broadcast of the British Grand Prix back in 1953 but also the iconic commentary partnership that was Murray Walker and James Hunt.

Today the BBC’s coverage is limited to radio, podcasts and online news articles but in yesteryear it was the home of Formula 1.

The BBC’s first-ever production of the sport was in 1953 at Silverstone for a British GP won by Alberto Ascari. It wasn’t until 1979, though, that it truly grabbed onto showing F1 races live on TV.

The Beeb, with its non-paying audience, caught the final embers of the Hunt versus Niki Lauda title battle in 1976 live on grand prix Sundays, saw Jody Scheckter crowned World Champion in 1979 and bore witness to the rise of McLaren in the 1980s and the drama that was Ayrton Senna versus Alain Prost..

It was only fitting that in its last year of being the go-to TV broadcaster for Formula 1, the season ended with the crowning of British favourite Damon Hill as a World Champion.

After 25 years of race coverage, BBC lost the rights to ITV for the 1997 season – before pay channel Sky Sports changed the face of sporting coverage. In today’s world watching the races on a Sunday afternoon on terrestrial TV are a thing of the past.

With pay broadcasters such as Sky Sports entering the playing field, and buying the exclusive rights to show all F1 grands prix live in a £100m million per season six-year deal back in 2016, public broadcasters like the BBC have been priced out of the game.

BBC cannot afford the big money for the rights, nor put up a 24-hour Formula 1 channel, with its live coverage now limited to radio.

James Hunt burst onto the Formula 1 scene in 1973, taking two podiums in his first season with Hesketh Racing. After three years with the team he moved up to McLaren, enjoying not only his best years in Formula 1 but also a lot of the product produced by McLaren’s main sponsor: Marlboro.

But despite his playboy image and reckless exploits out on track, which earned him the nickname ‘Hunt the Shunt’, Hunt raced his way to the 1976 World Title, taking it ahead of Niki Lauda. Such was their rivalry that it became the storyline for the movie ‘Rush’.

Retiring from Formula 1 midway through 1979 after an unsuccessful switch to the Wolff team, 1976 World Champion Hunt moved from the race track to the commentary booth.

He put in a guest stint alongside Murray Walker at that year’s British GP, impressing the head of BBC television sport, Jonathan Martin, to the point that he offered him a full-time job.

Hunt joined Walker in presenting BBC 2’s Formula One racing programme ‘Grand Prix’, earning the adoration – as if he was lacking in that – of the fans with his dry wit and insight. That he had imbibed a glass or three during many a broadcast only added to the legend that was Hunt.

He stepped into the live commentary booth at the 1980 Monaco Grand Prix where, legend has it, he drank two bottles of wine.

Hunt wasn’t afraid to criticise drivers, especially those he felt weren’t giving it their all.

René Arnoux was a frequent target as Hunt felt his behaviour when being lapped was a “disaster”. He took out Gerhard Berger out of the 1988 Australian Grand Prix. Hunt said Arnoux didn’t “deserve” to be in Formula 1.

He also criticised Arnoux a year later when the Frenchman said the reason he was going so slow was because he was only used to driving turbo cars.

Hunt’s response: “All I can say to that is bullshit!”

But don’t for a moment think Hunt, the F1 champ turned commentating hero, was only a playboy. He didn’t want his commentary broadcast in South Africa during apartheid but had no say in that. His response? He gave his fees to activists working against the South African government.

He died from a heart attack aged 45. Such was Hunt’s lifestyle that Lauda later declared: “When I heard he’d died aged 45 of a heart attack I wasn’t surprised, I was just sad.”

Graeme Murray Walker, otherwise known as the ‘Voice of F1’, was a BBC commentating legend from 1976 to 1996 before joining rivals ITV in 1997, where he stayed for a further five years.

Born in Birmingham, England, Walker was conscripted into the armed forces and graduated from the Royal Military College in Sandhurst. He would later command a Sherman tank in the Battle of the Reichswald with the 4th Armoured Brigade before leaving the Army as a captain.

Trying to find his place in the world, he studied shipping management before being employed as an accounts director by the Masius agency, where he was in charge of the Mars project which came up with the famous slogan ‘A Mars a day helps you work rest and play’.

Although he continued working in advertising, once again Walker broadened his horizons when, in 1948, he made his first public broadcast at Shelsley Walsh Hillclimb. A year later and he was commentating for BBC radio on the British F1 Grand Prix.

He established himself as the BBC’s chief motorcycling commentator before going into F1 full-time from 1978. However, even then Walker continued to dabble in other series, from the British Touring Car Championship to motocross and Macau.

It was his partnership with James Hunt at the BBC though which cemented Walker’s place in commentating history, as he brought the breathless passion and excitement which proved the perfect foil for Hunt’s dry wit and in-depth knowledge.

Walker remained with the BBC through to 1996 with Jonathan Palmer stepping up following Hunt’s death. But with F1’s television rights going to ITV in 1997, so too did Walker. This time it was former racer turned commentator Martin Brundle who brought the F1 know-how to Walker’s ‘Murrayisms’.

He retired from full-time commentating in 2001 but, even into his late nineties, he still makes occasional appearances as the ‘Voice of Formula 1′.

On Saturday, March 13, 2021, the British Racing Drivers’ Club announced the sad passing of Murray Walker at the age of 97.

Muzza gave us a few timeless gems along the way…here are few of his most famous quotes:

Nigel Mansell putting in a lap: “Nigel Mansell is slowing down now, he is taking it easy. Oh no he isn’t! It’s a new lap record!”

Pedro Diniz’s fire in Argentina: “There’s nothing wrong with the car except that it’s on fire.”

Interviewing Bernie Ecclestone: “Bernie it is some 17 years since you bought McLaren, you’ve had some good times and some bad times. What do you remember best?”

“How you can crash into a wall without it being there in the first place is beyond me!”

BBC F1: the end of the road

BBC had been a part of Formula 1 one way or another since the Formula 1 World Championship was formed in 1950.

The first live race ever broadcast in the UK was the 1953 British Grand Prix, shown on BBC.

However, between 1950 and 1979, races were rarely shown live, mainly highlights on either BBC or ITV.

BBC became the home of Formula 1 for British viewers from 1979 to 1996, fans tuning in on grand prix weekends to listen to the ‘Voice of F1’, Murray Walker.

ITV, tired of losing out to its rival on race weekends, paid what was then a whopping £60 million in a deal brokered by then F1 chief Bernie Ecclestone.

In his autobiography Walker noted that ITV “were sick of being cut to ribbons by Grand Prix on Sunday afternoons”.

BBC Radio 5 Live continued to provide full commentary for all the races, but that’s where the coverage ended.

That, though, was the start of the ‘your turn, my turn’ game that the BBC played over the next two decades, joined first by ITV, then the big bucks of Sky Sports, and later Channel 4.

The BBC won back the rights to broadcast F1 grands prix in 2009, signing a five-year deal for an undisclosed sum of money.

In a statement, ITV said it had been a “straightforward commercial decision” to exit F1.

The deal extended across all platforms – TV, radio and mobile – and marked the first time that the BBC had screened full race coverage on TV since 1996.

The Beeb played around with commentary teams, starting with Jonathan Legard, Jake Humphrey and former F1 driver Martin Brundle, before the latter was promoted to the number 1 chair in 2011, joined by fellow former driver David Coulthard. Legard was given the boot – his “problem” – a word he liked to use an awful lot.

Former F1 team boss Eddie Jordan added his voice to the mix while Ted Kravitz cut his teeth as a pit-lane reporter. Lee McKenzie joined Kravitz in the pit lane.

The arrival of Sky Sports changed the picture. Sky burst onto the scene in 2012, grabbing the rights to every practice session, qualifying session and the race live. It also grabbed the informative Brundle and the much-loved Kravitz.

The BBC continued to broadcast live coverage of half the grands prix while offering “extended highlights” of all the races on the calendar. Those were shown a few hours after the respective chequered flags.

But, in late 2015, the BBC was again in financial trouble, forced to cut £35 million from its sports budget. That meant dropping Formula 1 from its television broadcast schedule – again. BBC Radio 5 Live and 5 Live Sports Extra’s coverage continued, and was even extended until 2021.

This time it was Channel 4 which took over, pledging not to air ads during races as it struck a deal for 10 races a season.

“I am sorry that the BBC could not comply with their contract, but I am happy that we now have a broadcaster that can broadcast Formula One events without commercial intervals during the race,” said Ecclestone.

That concluded the BBC’s run of showing F1 grands prix on TV, although it does still provide radio commentary with Jack Nicholls working alongside former driver Jolyon Palmer and paddock reporter Jennie Gow. The BBC also offers website coverage of the World Championship.