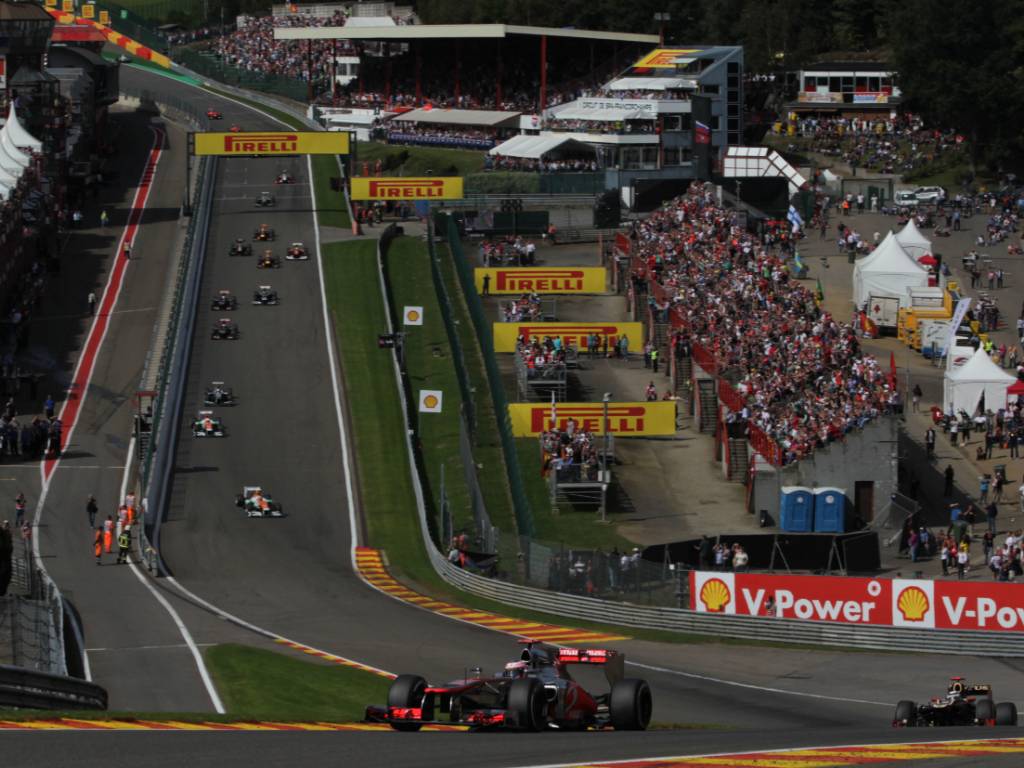 F1’s third triple-header of 2020 begins with the Belgian Grand Prix – and after an uneventful race in Barcelona, thrills and spills can be expected at Spa-Francorchamps.

The weekend could, of course, be dominated again by Mercedes and Lewis Hamilton. But Spa is a real drivers’ circuit with several exhilarating sections – Eau Rouge, Raidillon, Kemmel Straight, Blanchimont – that certainly test the ‘bottle’ and an uncertain weather forecast also suggests this will be a race to remember, not forget.

Spa has not been Hamilton’s most successful track. His tally of three victories is one fewer than Kimi Raikkonen’s and last year he was runner-up to Charles Leclerc at a time when that controversial Ferrari engine was ruling the roost.

It was a weekend, however, that was overshadowed by the death of F2 driver Anthoine Hubert and a serious injury to Juan Manuel Correa in a crash at Raidillon, and this is very much a circuit where the heart can be in the mouth watching cars racing wheel to wheel at high speed.

Hamilton will be hot favourite for a fifth win in seven races this year after Mercedes put their Silverstone tyre woes behind them, at least temporarily, with a serene victory for the World Champion in Barcelona.

The 35-year-old Brit is now 37 points ahead of Max Verstappen in the World Championship standings and fully in control of the situation as he strides towards matching Michael Schumacher’s record of seven titles.

Along with Hamilton’s team-mate Valtteri Bottas, who has admitted his title hopes are “drifting away” after failing to add to his season-opening Austrian Grand Prix success, Verstappen looks the only other feasible Spa victor – but that’s as long as it stays dry.

However, it may well not. The early forecast is for rain on each of Friday, Saturday and Sunday, with a maximum air temperature of only 14C on race day. If correct, and rain arrives, that could potentially open things up for the rest of the field.

At Spa last year, Alex Albon made his debut as a Red Bull driver and it was a highly encouraging start as he finished P5. The London-born Thai needs a similarly positive performance this time after a difficult campaign so far in which he has found the car to be much more of a handful to drive than the much more competitive Verstappen.

Ferrari have won the Belgian Grand Prix for the last two years, with Sebastian Vettel’s triumph in 2018 preceding Leclerc’s of 12 months ago.

But it would be a major shock if they were to bring up the hat-trick. Leclerc has had two podium finishes this term but they both owed much to a large slice of luck, or more specifically the misfortune of the Mercedes.

Still, the Monegasque driver continues to fare better than his colleague Vettel, whose messy ‘divorce’ from Ferrari is resembling a soap opera with even the slightest hint of friction over the team radio scrutinised as the German cuts an increasingly isolated figure in the team.

At the time of writing, there was still no clarity about what the German’s future will hold for 2021 and beyond. All had gone quiet on the Racing Point front and there appears little need for the ‘Pink Panthers’ at this stage to make a change to their drivers.

Aside from the ongoing wrangles over the legality of their car, Racing Point can be happy with their performances and both Lance Stroll and Sergio Perez did themselves plenty of credit by finishing P4 and P5 respectively in Spain.

Belgium has been a happy hunting ground over the years, and in 1998 @HillF1 took the first ever victory for the Silverstone-based squad in a chaotic race, while Ralf Schumacher brought it home in second to really put the icing on the cake 🎂#BelgianGP #F1 pic.twitter.com/LgRgUyTNUk

Perez returned strongly from his enforced two-race absence after contracting COVID-19 and even a penalty for ignoring blue flags that dropped him behind his team-mate did not really detract from an impressive showing.

For third place in the constructors’ World Championship standings, it’s extremely close at present between Racing Point, Ferrari and McLaren, who are all covered by just two points.

McLaren will hope to maintain their consistent record of reaching Q3 and Carlos Sainz, who makes no attempt to hide his opinion that he has found all the bad luck going this year, will hope his P6 finish in his home event was a signal that things are finally turning around.

Renault are flattering to deceive somewhat. Daniel Ricciardo has been proving very quick in practice and sometimes qualifying, but so far his team have not managed to put together a complete race weekend.

The Australian’s team-mate Esteban Ocon needs to step things up from a personal point of view, especially after his bizarre FP3 crash in Barcelona that threatened his entire participation.

Last time in Spa was fun 😁🔥 We are back there this week end ✌🏻#EO31 #BelgianGP pic.twitter.com/Dud1iU7og0

Pierre Gasly has just reached the unwanted one-year anniversary of his demotion from Red Bull but is rebuilding his career nicely at AlphaTauri, outperforming Daniil Kvyat who is starting to feel the spectre of Dr Helmut Marko’s next generation of driver talent breathing down his neck.

Haas will want to repeat their fine Friday performance in Barcelona but not drop right back down the order this time when things become serious. Yet the likelihood is that they will again be in their own private battle with Alfa Romeo and Williams to initially determine which driver(s) from those teams can get into Q2.

George Russell in particular will certainly want to exhibit his talents again in the first race since Williams were sold to American investment company Dorilton Capital.

But at the sharp end, it is expected to be Hamilton, Bottas and Verstappen lining up those regular podium spots again.

That’s unless Spa, with its own unpredictable little micro-climate, lives up to its reputation and produces some timely excitement.