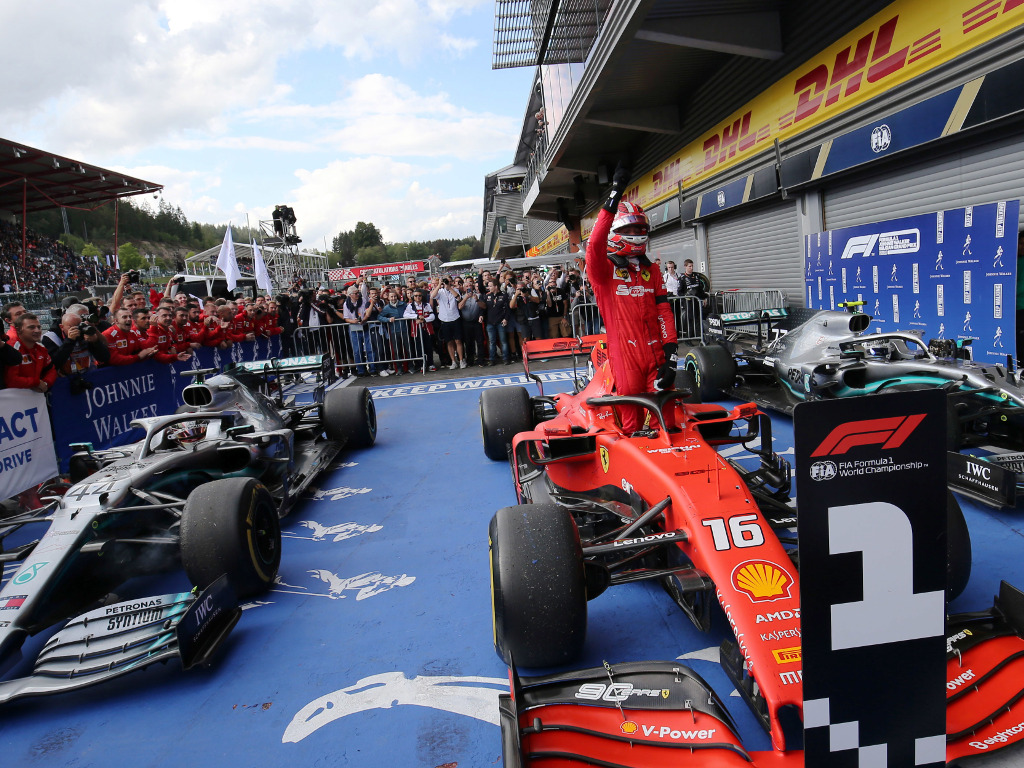 The question of when was answered at Spa as Charles Leclerc raced to his maiden F1 grand prix win, holding off five-time World Champion Lewis Hamilton late in the race.

The Ferrari driver was always destined to become a grand prix winner and, after two near misses, he did so at the Belgian Grand Prix.

In the face of yet more sorrow for the 21-year-old following the death of his childhood friend and F2 racer, Anthoine Hubert, Leclerc showed a maturity beyond his years.

It was a near-perfect performance from the youngster while Red Bull’s new signing Alexander Albon also took his opportunity to shine.

Charles Leclerc: “It’s a matter of when, not if”. A statement that has been thrown around for a while now when speaking about Leclerc’s chances of winning a grand prix. The answer of when has been answered as Leclerc led most of the race in Belgium.

A dominant pole position might have led some to believe that Leclerc would walk away with this one but the indication that Mercedes would be strong in the race came to fruition as Leclerc was forced to fend off Hamilton in the closing stages. He did so with maturity far beyond his years. – 9

Lewis Hamilton: It might not be another win that can be added to the tally but it was yet another strong performance from Lewis Hamilton as he closes in on a sixth World Championship.

Closing to within a second of Leclerc’s lead by the final lap, Hamilton might well have claimed the victory had there been one more but Sunday proved to be Leclerc’s day. Perhaps he will rue not getting past Vettel a lap or two sooner as that could have made all the difference. – 9

Valtteri Bottas: A solid if unspectacular race for the Finn where the top two guys were always just a little too far away. Bottas did a reasonable job of keeping up with his team-mate and Leclerc, but never threatened the victory.

It’s now been nine races since Bottas last stood on the top step. Opportunities are running out fast if he wants to at least keep the pressure on Hamilton down the home stretch. – 7

Sebastian Vettel: On a weekend that gave Vettel his best chance to win a grand prix since Canada, nothing really came together as the limelight was firmly directed towards his younger team-mate.

After a qualifying session which saw him finish a long way back from his team-mate, Vettel was forced to play second fiddle in order to allow Leclerc to take the victory. A scrappy weekend with plenty of minor errors but another opportunity should be just around the corner. – 6

Alex Albon: Debuts are never easy, let alone when you debut for a team where wins and podiums are more than achievable but Albon dealt with the pressure well and delivered a confident performance as he carved his way through the field.

A grid penalty gave him the freedom to attack the midfield and he did well avoiding incidents throughout. Albon created something of a highlight reel thanks to some eye-catching overtakes, particularly one on Daniel Ricciardo. Strong start. – 9

Sergio Perez: Spa has become a happy hunting ground for Sergio Perez and that continued with another solid points finish. He narrowly missed out on P5 but the car seems to be improving as the year goes on. A good sign with Perez signing a multi-year contract with the team. – 8

Daniil Kvyat: The rampant charge through the field from Albon has slightly overshadowed the good work that his ex-team-mate put in at Spa. Starting P19, Kvyat made up 12 positions in the grand prix. A mixture of good strategy and good overtakes was a recipe for success here. – 9

Nico Hulkenberg: With most drivers going with a one-stop strategy, Hulkenberg decided to go against the grain with a two-stop strategy that paid off towards the end of the race. With one-stoppers struggling in the closing laps, Hulkenberg grabbed the opportunity to secure a few points. – 8

Pierre Gasly: All in all, this was a solid return to Toro Rosso for Gasly and it’s good to see the wheels haven’t completely fallen off after the demotion. Gasly looked punchy throughout and got involved in some fun scraps. Two points was the outcome after a respectable afternoon. – 7

Unbelievable racing! 👊 3 cars in the points for the Honda team 👌

A cumulative 28 places made up by the boys from the start of the race! #PoweredByHonda pic.twitter.com/dOzu750QXk

Lance Stroll: I don’t think many would have tipped Stroll for a top 10 finish with just one lap to go in the grand prix but the misfortune of Norris and Giovinazzi helped him out as he claimed a point at very end. – 6

Lando Norris: This must have been a tough one to take, Norris’ reaction to the last lap DNF proves as much. Avoiding the first corner melee, Norris made up a number of positions before locking down P5 with little threat from the chasing pack. In cruel fashion, the Macca gave up on Norris with just one lap left. – 9

The @McLarenF1 driver agonisingly missed out on a points finish, but did win most votes for Driver Of The Day #F1 #BelgianGP 🇧🇪 pic.twitter.com/cvihUeWk1Y

Kevin Magnussen: For much of this race, Magnussen was little more than a moving chicane which others needed to overcome. Going long on the first stint did at least make him much faster at the end, enough to narrowly defeat his team-mate. – 6

Romain Grosjean: Thanks to his team-mate slowing some cars up, Grosjean remained in the points for much of the first half of the race but it was all downhill from there as the floodgates opened and everyone took the chance to overtake. Grosjean summed up his afternoon with a displeased radio message. – 6

Daniel Ricciardo: A big shame is a concise summary of Ricciardo’s weekend. Practice and qualifying promised so much but becoming involved in the first corner incident compromised his race thereafter. Sticking to a one-stop was a bold call with an early visit to the pits and he was soon overtaken by those on fresher tyres. – 6

George Russell: The grand prix in Hungary before the summer break brought some promise for Williams but Spa, by many definitions the polar opposite, was a different story. Russell did everything he could in the car and beat his team-mate by over sixteen seconds. – 7

Kimi Raikkonen: Raikkonen has become a Spa specialist over the years but his crash with Verstappen at La Source denied him the opportunity to show his prowess at the circuit. Two early visits to the pits made for a long afternoon. – 6

Robert Kubica: With a 2020 seat still to be decided, Kubica needs to deliver some performances where he is at least matching his team-mate. This unfortunately wasn’t one of those as he lingered behind. – 5

Antonio Giovinazzi: Another driver who is fighting for his 2020 seat, Giovinazzi was definitely heading in the right direction with this grand prix and looked set to add a point to his total but he was denied by a crash at the very end. – 6

Carlos Sainz: In a season full with great Sainz performances, this is one where the Spaniard wasn’t able to show his quality. A stall on the grid was followed by (probably related) issues with the car before pulling up under the Safety Car. – 5

Max Verstappen: You can’t win a grand prix at Turn 1 but you can definitely lose it. Verstappen suffered his first retirement in over a year at the Belgian grand prix.

A poor start saw other drivers fly past, looking to make amends Max leapt up the inside of La Source but only succeeded in hitting Kimi Raikkonen. One to forget. – 4

The Belgian Grand Prix driver ratings are courtesy of the good folks at Late Braking. You can check them out in the following places: