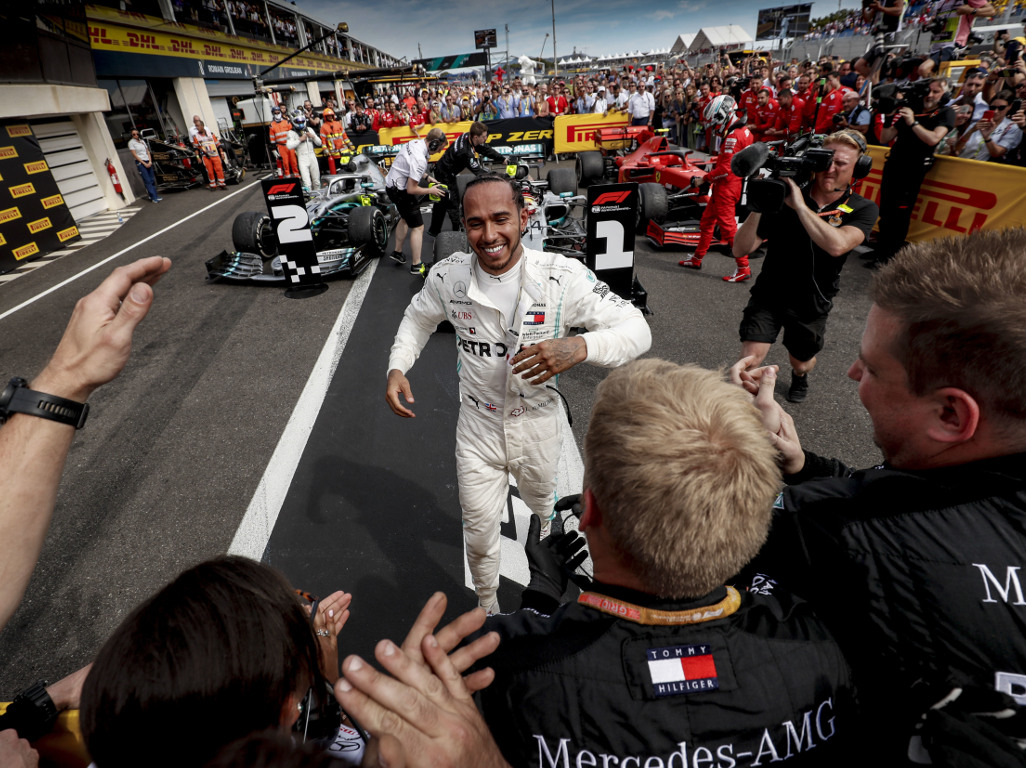 The Silver Arrows will soon be swimming in a sea of records, F1’s stewards shoot themselves in the foot again, and McLaren move forward as Pierre Gasly takes two steps backwards.

How many records can Hamilton and Mercedes break?

With a 36-point lead over his team-mate after taking the chequered flag in France, Lewis Hamilton is seemingly set to win the title at a canter. Mercedes have also swept to victory in all eight races in 2019, though they got lucky in Bahrain and Canada. It’s unlikely that the Silver Arrows will win every grand prix of the year but plenty of other records are in sight.

One-twos in a season: Mercedes have seven already, and need just six more to break the record they set in 2015.

Constructor wins in a season: The German marque needs 11 more wins from the remaining 13 races to equal the record they set in 2016.

Driver wins in a season: With six wins under his belt, Hamilton needs eight more victories to surpass the 13 wins in a season achieved by Michael Schumacher and Sebastian Vettel in 2004 and 2013 respectively

All-time driver victories: Victory at Paul Ricard took Hamilton to 79 career wins, leaving him just 12 adrift of Schumacher’s record, which was previously thought to be insurmountable.

Under the current regime of over-regulation and over-zealous stewarding, the order in which the cars finish races is becoming redundant. Daniel Ricciardo, who finished seventh on the road, was hit with two five-second penalties for his overtakes on Kimi Raikkonen and Lando Norris.

The stewards deemed that the Renault driver had left the race track to complete the moves and was thus demoted to seventh. The penalty makes a mockery of racing as Ricciardo’s overtakes were a rare highlight in a grand prix that was largely processional.

Ricciardo, in true racer spirit, believed he was right to try the overtakes. But in the bigger picture this was the third hefty penalty that the stewards have issued in two races.

Sebastian Vettel received a controversial five-second penalty in Montreal that cost him the race win and, at Paul Ricard, Sergio Perez was handed a similar punishment despite following the rules.

Vettel and Max Verstappen are among the drivers who have called for a less onerous set of regulations to give drivers the freedom to race. Meanwhile, after winning in France, Hamilton said that F1’s rulemakers are to blame for the lack of excitement

The penalties and the World Champion’s sentiments strike at the heart of the issues in modern F1. These are the best drivers in the world and they should be allowed to race without the fear of penalties for minor infractions and of the inconsistent application of the rules.

Bereft of character, the car park venues masquerading as racing circuits are also a problem. Ricciardo was deemed to have exceeded the track limits but if F1 did away with excessive concrete runoff areas and replaced them with grass or gravel drivers would not push the limits because the reward would not be worth the risk.

McLaren are back. Almost.

McLaren have accumulated 40 points so far this season compared with 62 in 2018. Although the MCL34 is a clear improvement on its draggy predecessor, it is worth noting that McLaren got off to a reasonable start last year before tailing away as their competitors won the development war.

Indeed, Fernando Alonso and Stoffel Vandoorne finished in the points eight times in the first five grands prix of 2018 – while in this campaign Norris and Carlos Sainz have managed seven points finishes in eight races.

Zak Brown will need to ensure that his team in Woking continue to develop the MCL34 to avoid the second-half-of-the-season blues. Yet there are encouraging signs. The Renault power unit is stronger and McLaren are much closer to the big three in qualifying thanks to a much more compliant chassis. And say what you will about a certain double World Champion from Spain, but Sainz and Norris are doing an excellent job. Fernando who?

Round of applause for our boys for a mega effort this weekend. #FrenchGP 🇫🇷 pic.twitter.com/LnkqJV1BwU

A midfield battle to savour

McLaren are three points clear of Renault in the battle for fourth in the Constructors, but both are well adrift of the big three. By the same token the pair also have a healthy cushion over the rest of the midfield runners in what is a tight pack.

The difference between sixth in the standings and ninth is just three points. There is everything to play for among Racing Point (6th with 19 points), Alfa Romeo and Toro Rosso, (level on 17 points in 7th and 8th respectively) and Haas (9th with 16 points).

Pierre into the abyss

Red Bull team boss Christian Horner said Pierre Gasly’s showing at his home race was “frustrating” after the young Frenchman finished P11 after starting P9. Pressure is mounting on Gasly due to his lowly finishing positions but also because of the gap to team-mate Verstappen. There has also been growing pressure from sources external to the team as former Red Bull driver Mark Webber recently criticised Gasly’s form.

With more than a third of the season over, Gasly has done nothing to warrant retaining his Red Bull seat in 2020 and without a stellar result soon the talk might shift to whether he can even see out the year with the team.