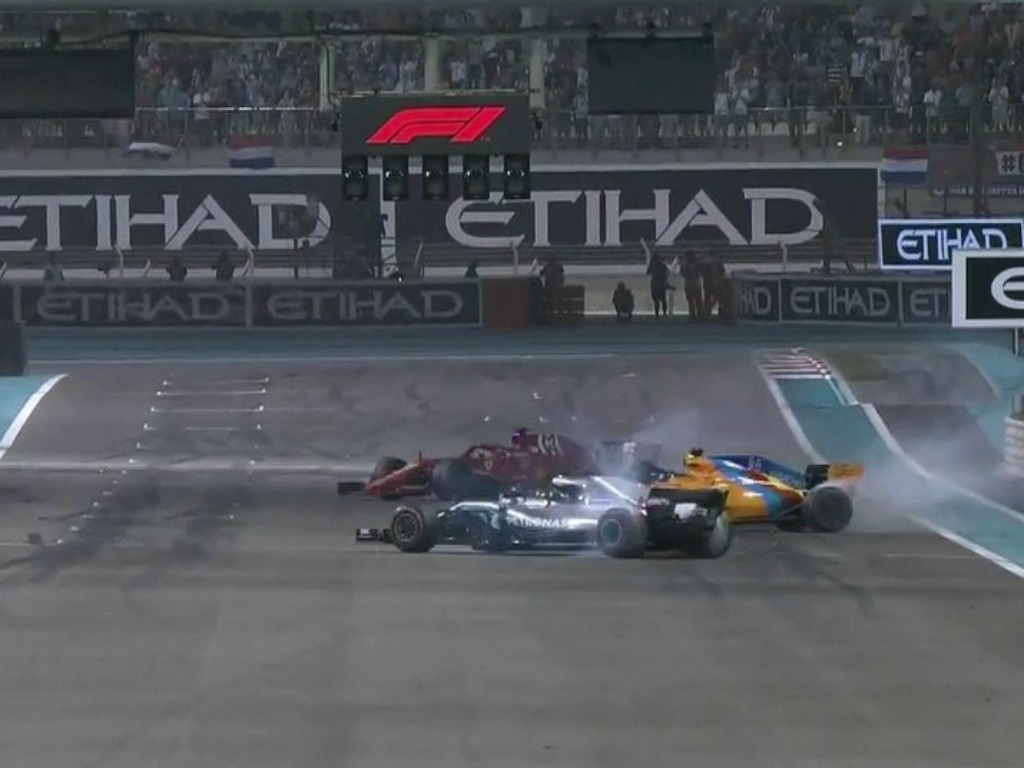 It’s all change but everything stays the same

The year’s valedictory parade around Yas Marina included a special send-off for Fernando ‘the double-champion-who-could’ve-and-should’ve-won-five-titles’ Alonso.

Red Bull waved farewell to Daniel Ricciardo, while the likes of Stoffel Vandoorne, Marcus Ericsson and Sergey Sirotkin all got their last taste of Formula 1.

We also say goodbye to this generation’s elaborate front wings and to the stupid naming conventions of the Pirelli tyres.

Yet amid this flux, the same two men finished first and second, and the same three manufacturers swept the podium. Toto Wolff was delighted with Lewis Hamilton’s 11th win of the campaign.

The Brit was flawless once again and has promised that there is more to come in 2019. Sebastian Vettel nipped away at Hamilton’s heels but in the fashion of the season fell just short. And it was no surprise that Max Verstappen got the better of the departing Danny Ric.

But winter is coming

The winter reset promises to shakeup the order in 2019, though Mercedes remain the team to beat. Their power unit may not be the best anymore, even if it is essentially bulletproof.

In Hamilton they have an all-time great driver at the peak of his powers and from an operational point of view the Silver Arrows have incredible resilience and strength in depth.

Ferrari’s strategic decision-making lags Mercedes and Vettel, though fast, has admitted that the better man won in 2018. The Scuderia also through away points through the season by failing to impose team orders.

It would take a bold prediction to discount these two teams heading into the new year. But the injection of new blood – Charles Leclerc to Ferrari and the arrival of Lando Norris and George Russell respectively – and Honda’s marriage to Red Bull are all wild cards worth watching.

And what can Renault do now that they have a tier 1 driver in Ricciardo? Quite simply: Melbourne can’t come soon enough.

From an aesthetic point of view the Halo has largely been absorbed into the visuals of the cars.

The device also proved its worth in Spa, where Leclerc was well protected from an airborne Alonso. But Nico Hulkenberg’s accident in Abu Dhabi, in which his Renault was launched into a barrel roll after contact with the Haas of Romain Grosjean, raises questions about the Halo in terms of extracting a driver.

A clearly panicked Hulkenberg said “get me out of here” on radio from his upside down Renault, as flames licked out of the back of the car.

Thankfully the marshals extinguished the fire and the German was extracted after the car was pushed over.

Perhaps the question for the FIA is how often does a Leclerc-like incident take place relative to what Hulkenberg experienced?

Then again, could the authorities look into a quick-release mechanism that pops the Halo off the chassis in extreme cases such as what was seen at Yas Marina.

The statistics don’t make for pretty reading. Hamilton scored 11 wins and a further six podiums on his way to a fifth title, won with a record 408 points.

Valtteri Bottas was unlucky on several occasions, particularly in Baku, where he should have won. But he ends the season with no wins, 8 podiums and 247 points.

Yes, Hamilton is the world’s best but Bottas looks thoroughly incapable of challenging the Champion. More worrying is that his fifth in Abu Dhabi was his fourth fifth place on the bounce, meaning he’s being beaten not only by his team-mate but by the Red Bulls and Ferraris too.

Abu Dhabi was again symptomatic of Bottas’s issues, locking up twice to allow Vettel and Verstappen to get past. With Ocon in the wings and a queue of drivers – not least Alonso – looking for competitive drives, Bottas needs to get onto the front foot asap.

It was a nice touch from Liberty Media to give Alonso the opportunity to sign off in style alongside Vettel and Hamilton, who have claimed nine of the 12 titles since the Spaniard claimed his second (and what has proved to be final) title in 2006.

His departure leaves just three Champions on the grid next year: Kimi Raikkonen, Vettel and Hamilton.

As for the race, Alonso fought his way into P11, collecting a time penalty for his efforts as he was adjudged to have left the track to gain an advantage.

It was, in a nutshell, the type of dogged and plucky performance that encapsulates Alonso’s spirit, and what makes him so great to watch. Typically, he was also on form over team radio.

His team tried to motivate him to claim the last points-paying position. But his sardonic reply – “I have 1,800 points” – speaks volumes of the man. We wish him well and who knows, maybe he’ll be back in a competitive car in 2020.

* Leclerc ran as high as P4 at the start of the grand prix. Sauber’s gamble to pit their man under the VSC did not pay dividends but he finished his last race for the team with yet another strong points finish.

* Verstappen got a revenge of sorts on Esteban Ocon, overtaking the Force India aggressively at turn 7. F1 is poorer without Ocon on the grid in 2019 but as Mercedes third driver he will retain his visibility and will be in contention for a seat in 2020 depending on Bottas’s performance.

Verstappen muscles his way around Ocon for P8, giving his sparring partner a little kiss in the process 😮

* Williams finished last – again – and with just seven points all year end the season at the foot of the Constructors’ standing. The arrival of Russell and the return of Robert Kubica represents a new dawn for the team that would be hard pressed to do worse than they did in 2019.