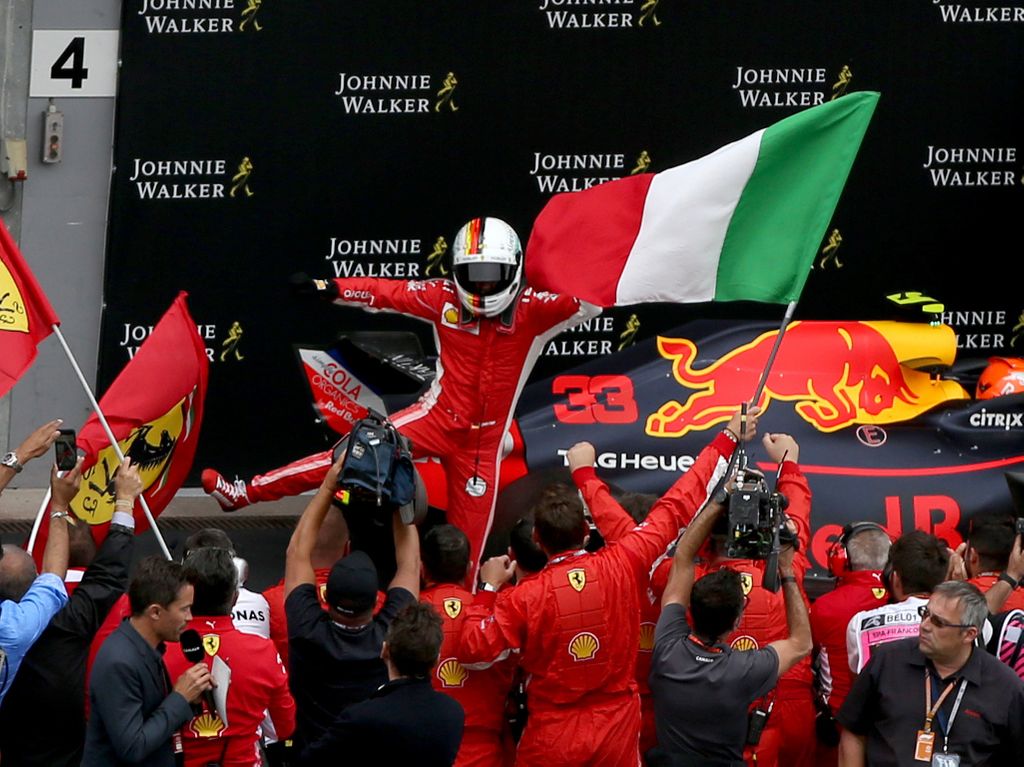 Ferrari ‘swallows up’ Mercedes at Spa while Nico Hulkenberg’s crash raises questions, and answers others at the Belgian Grand Prix.

Sebastian Vettel’s season has swung from the sublime to the silly and back again. His two wins at the start of the campaign were followed by a four-race fallow spell and then victory in Canada.

The contact with Valtteri Bottas in France, grid penalty in Austria, and crash in the rain in Germany cost him a bucketload of points, even though he won at Silverstone.

There’s no doubt that Ferrari has the best machinery on the grid, and that Vettel shouldn’t be 17 points behind Lewis Hamilton in the standings. It is also true that the Scuderia would have had pole position in Belgium had blue skies prevailed.

The rain on Saturday meant that Vettel had to put his red monster to work to claim all 25 points. And he was decisive in the three moments where it mattered most.

First, Vettel used Ferrari’s grunt to stay close to Hamilton at the start and through Eau Rouge, before powering past the Mercedes down the Kemmel straight. As Toto Wolff said after the grand prix, Hamilton was “swallowed up”.

Second, Vettel held his nerve to fend off Hamilton at the restart after the safety car; and third, Ferrari and Vettel executed a perfect pit stop and in-lap to maintain the lead after Hamilton tried the undercut. Hamilton and Mercedes, quite simply, had no answers.

That crash raises questions, answers others

The leaders were into turn 1 when Nico Hulkenberg’s four-wheel lockup precipitated carnage reminiscent of the 2012 Belgian Grand Prix, caused by a certain Romain Grosjean.

Grosjean had to work incredibly hard to rehabilitate the “first-lap nutcase” reputation that Mark Webber bestowed upon him six years ago due in large part to the Spa incident.

Hulkenberg’s error rendered his Renault a torpedo that speared into and launched the helpless Fernando Alonso’s McLaren skyward and over the equally helpless Charles Leclerc’s Sauber.

It’s the first time in a long time that anyone could describe a McLaren as high flying, while poor Leclerc has retired from three of the last four races due to circumstances beyond his control.

And so, does Spa 2018 mean that The Hulk is a “first-lap nutcase”? Probably not. But it does highlight potential weaknesses in his racecraft.

The German is a solid racer but has made some high-profile errors this season; notably in Spa but also in Baku when Renault were well placed to bag a good result. Moreover, perhaps he is preoccupied by the changes to the grid and the fact that Daniel Ricciardo will be his team-mate in 2019 when he will have nowhere to hide.

Also, is the 10-place grid penalty the appropriate punishment given Grosjean received a one-race ban for his error six years ago? One question, though, that has been answered conclusively is that the halo did it’s job, as the pictures of Leclerc’s Sauber show.

Bottas’s weekend was compromised by the grid penalty and his return of fourth place was just about the maximum on offer. His overtake on the poor old Toro Rosso on the outside of Eau Rouge was titanic in its bravado and exceptional in its execution. It was by far the best overtaking move of the race and is among the best of the season, and was also reminiscent of Webber (that guy again) pulling off a similar move on Alonso in 2011.

But keen-eyed viewers may have noted that Bottas slid into the back of a Williams on lap 1 — a near identical incident to Vettel running into the back of Bottas in France, which resulted in a five-second penalty for the Ferrari driver.

Bottas was eventually hit with a similar penalty late in the evening — five seconds and two penalty points for causing a collision with Sergey Sirotkin. That, though, did absolutely nothing to impact his P4 on the day as he was well ahead of fifth placed Sergio Perez at the line.

A great start for Haas and Kevin Magnussen set up his race well, though it was not enough for him to beat team-mate Grosjean — who scored an important result given the machinations in the driver market. It also wasn’t enough for Haas to get the better of Force India, which is now under new ownership and part of the field despite protestations from the American team.

Esteban Ocon was the star in qualifying and was second on the road at the end of the Kemmel straight briefly on lap 1, but his audacity to challenge Vettel for the lead was ultimately punished as he slipped behind team-mate Sergio Perez.

And there is more to come, says Sergio Perezhttps://t.co/YQObaYwwmF#F1 pic.twitter.com/LraNks1x1O

Both Force Indias were overtaken by Max Verstappen and Bottas, yet fifth and sixth is a brilliant result for the team that was on the precipice not long ago.

As for Ocon, his fine weekend will hopefully put him in contention for a race seat in 2019, as he is by all accounts on his way out of Force India to make space for Lance Stroll whose father led the consortium that took control of the team.

It’s worth noting that Verstappen has moved ahead of Ricciardo in the standings, while Gasly, who will replace the latter at Red Bull in 2019, impressed again by finishing ninth.

There was also a point for Marcus Ericsson, whose tenth-place finish was his third points-scoring result in the last six races.

The Swede is expected to lose his seat, possibly to home-boy Stoffel Vandoorne who finished dead last and endured yet another miserable weekend.