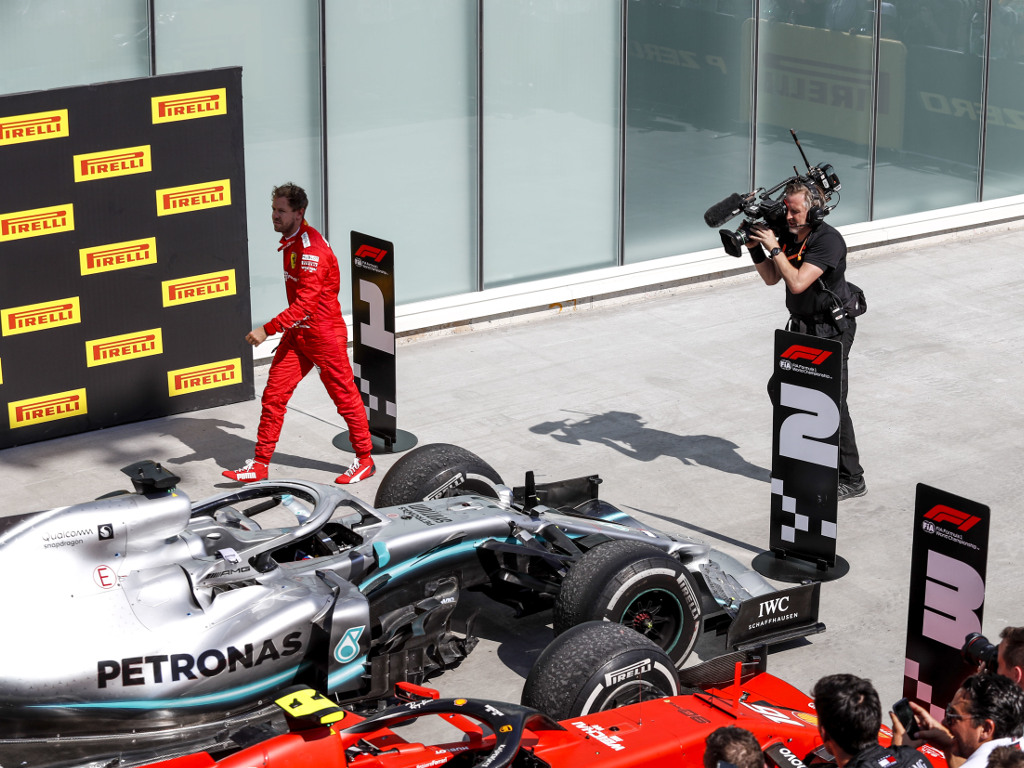 F1 really does have a habit of some crazy s*%t.

The five-second penalty that the race stewards imposed on Sebastian Vettel is the main talking point from the race as it handed the victory to the man who finished second on the road.

From a pure entertainment point of view, the penalty killed the show and neutralised a grand prix that was heading for a grandstand finish between two of F1’s biggest stars that fans at the circuit and watching on television alike have been waiting for all season.

Once again analysts were united in their belief that it was a harsh penalty. Vettel had controlled the race until making the error, but after slithering through the grass the Ferrari driver returned to the track and in slow-motion replays can be seen turning his steering wheel to the left, away from the racing line. But at this point the car oversteers and Vettel is a passenger as his Ferrari slides towards Lewis Hamilton’s Mercedes and the barrier. It is clear that Vettel has no intent to block Hamilton, has barely has control of the car, and has nowhere else to go.

The decision showed a lack of consistency, too. On lap 1 Romain Grosjean rejoined the race track at turn 2 after taking evasive action into turn 1, though he enters the race track directly into the middle of the pack without so much of an investigation from the stewards. Similarly, quite how Vettel’s rejoining of the track can be of the same severity of an unsafe release in the pits, such as in Monaco where Max Verstappen’s Red Bull made contact with Valterri Bottas’s Mercedes, defies all reasonable logic.

Yet the penalty also reminds us why we love F1, or perhaps love to hate F1. The post-race tension and drama made for gripping viewing, with as much excitement as anything we saw on it. Vettel’s behaviour offers an intriguing insight into the man’s character, especially his plea to the crowd to not boo Hamilton.

Finally, the penalty also sparked the best move of the race weekend: how good was it to see Vettel’s defiance and audacity in moving the No. 1 sign from Hamilton’s car after the race.

Now to the rest of the conclusions…

Vettel buries the ghosts of Hockenheim 2018. Sort of.

The four-time champion channelled the Vettel of old to put in a stonker of a lap in qualifying to steal pole position in Canada, his first since Germany 2018. Vettel would subsequently make a mistake in the rain during his home race and crash out – an error from which he has yet to fully recover.

Say what you will about the penalty, in Montreal Vettel again showed a similar frailty under pressure and propensity to make an error when it matters most.

The bottom line is that if he hadn’t have made the mistake that sent him into the grass in the first place he wouldn’t have rejoined the track, wouldn’t have cut across Hamilton, and wouldn’t have got a penalty.

Mercedes: So good they win even when they lose

Not for the first time this season Mercedes have capitalised on Ferrari’s misfortune to claim a race win they had no right to claim. With a third of the season over, no other driver other than a Mercedes driver has found himself on the top step of the podium after a grand prix.

If Ferrari and Red Bull cannot beat the Silver Arrows when they have off weekends (Canada) or when they make errors (Monaco), there is little hope of beating them when they string it all toether (most of the time). 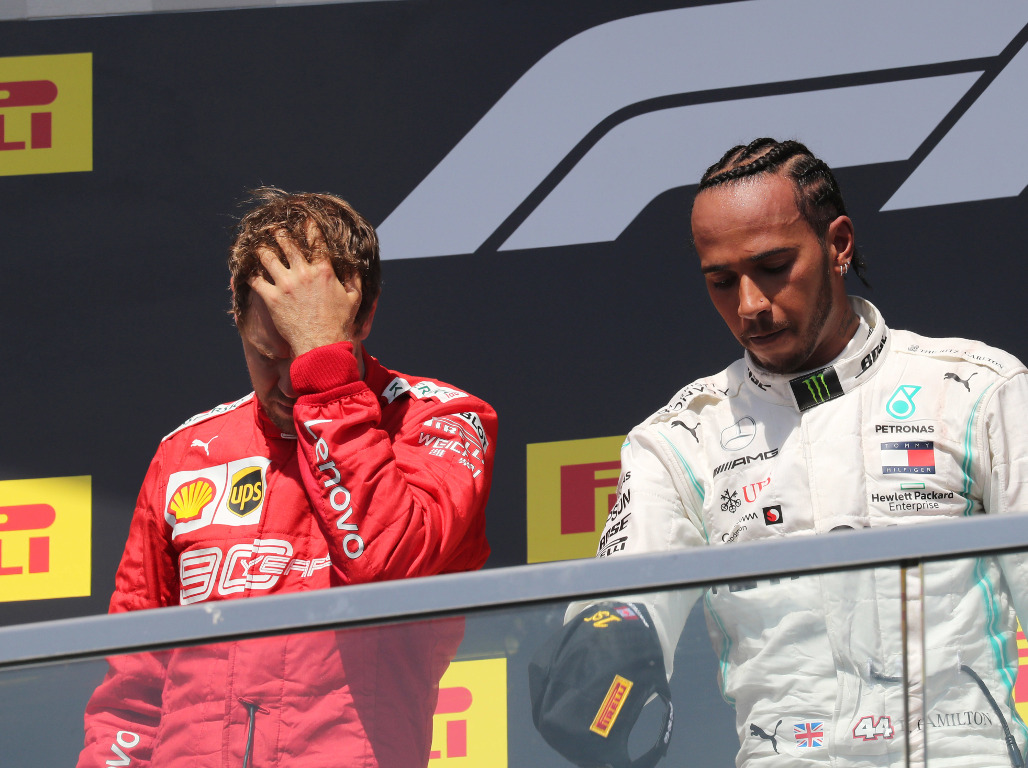 Both Bottas and Charles Leclerc found themselves adrift of their illustrious team-mates in Canada. Leclerc is still bedding in and continues to show flashes of brilliance while improving his consistency, but Bottas, after matching Hamilton in the first four races with two wins and two seconds, has steadily dropped off the pace since then. He needs to beat Hamilton and soon, lest we see a reversion to the Bottas of 2018. 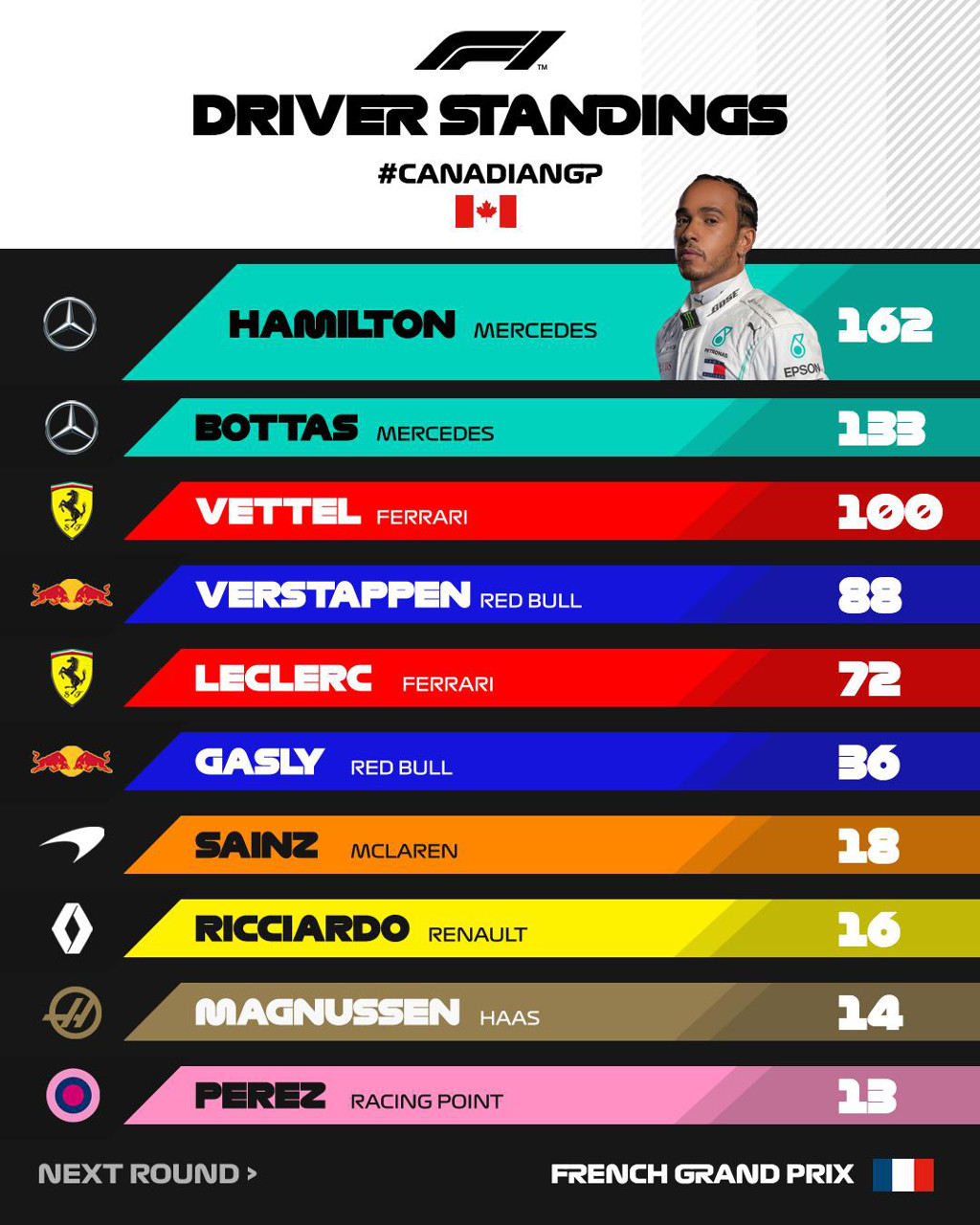 Daniel Ricciardo’s qualifying lap is probably the qualifying lap of the year, as the Renault RS19 had no right to be on the second row of the grid. Ricciardo could do nothing to stop Bottas and Verstappen from beating him in the race, but P6 for the Australian and P7 for team-mate Nico Hulkenberg represents the first real sign of proper progress from the French outfit in many a season.

Lance Stroll’s offset strategy paid dividends as a long first stint at a very competitive pace put his Racing Point in the perfect position to bag points. Stroll has had a difficult start to life at the team and deserves credit for maximising performance on a weekend that looked doomed to be a dismal one when his engine went pop in practice.

Stroll powers past Sainz for P9…

Then Kvyat makes a daring dive past for the final point too! 💪#CanadianGP 🇨🇦 #F1 pic.twitter.com/43QSJHUBg7

Move of the race

Daniil Kvyat 4.0 is a fine racer and he showed it again with a gravity-bending move on Carlos Sainz into T1 to claim the last points-paying place. It was another eye-catching performance from the Russian, especially since Pierre Gasly could only manage eighth after getting stuck behind Stroll for an extended period.