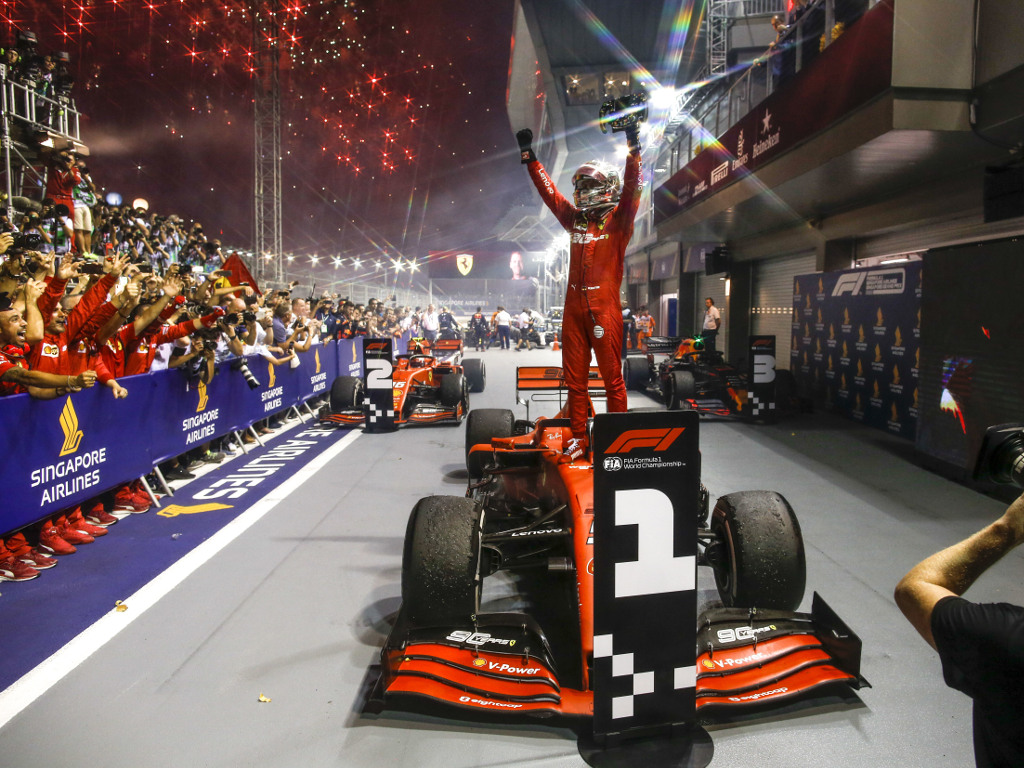 In this edition we analyse a vintage showing for Vettel, Leclerc’s unhappiness, Red Bull’s annoyance and Gio’s spell in the lead of the race.

So much for the expert consensus that Ferrari wouldn’t even be in the fight for a podium, let alone a race victory, at Marina Bay. The Italian outfit’s updates on its front-end proved decisive and provided Sebastian Vettel and Charles Leclerc with the balance and front downforce that they had lacked at slow-speed circuits through the rest of the season. The high-speed masters became street fighters overnight.

Ferrari’s advantage at high-speed circuits such as Monza is well documented, but the developments on the SF90 have completely recalibrated the calculus for the rest of the campaign.

With three wins in as many grands prix it is the Prancing Horse that is the team to beat in the remaining races of the season. While this has come too late for both championships in 2019, it does suggest that the men from Maranello will also be in the mix for the title next season.

One man’s redemption is another’s injustice

After the grand prix, race-winner Vettel admitted that the last few weeks have been “difficult”, with his upstart team-mate claiming successive victories and underscoring his status as Ferrari’s potential number one driver. But a first race win in more than a year offers a reminder of Vettel’s not inconsiderable talent – even if Ferrari’s strategy call to stop him first was a bit of good fortune.

Given Vettel’s struggles over the last 18 months, few would begrudge him a lucky break. At the same time this was a vintage Vettel performance. Once he had undercut Leclerc and Lewis Hamilton at the first, and only, round of pit stops, Vettel controlled the pace, scythed through the traffic faster than Leclerc, and managed multiple restarts after late safety cars with aplomb.

Leclerc, who had taken a brilliant pole and who had the measure of Hamilton and Vettel until the stops, was understably upset with the strategy, though he did praise the team for securing their first 1-2 finish since 2017.

. @Charles_Leclerc : "Very frustrating in the car. Looking back at it I believe that if Seb undercutted me it's mostly because the decision has been done for the good of the team. I will ask for explanations, if that's the answer I will understand it."#SingaporeGP pic.twitter.com/nP6mNndV1E

Did Merc make a mess of it?

Hamilton successfully fended off a punchy Vettel at the start, and then could do little more than hold station behind Leclerc. Ferrari made a late call to pit Vettel first rather than leader Leclerc, which seemed to catch the Silver Arrows on the back foot. When Leclerc came into the pits a lap later, the obvious strategy seemed to be for Mercedes to pit Hamilton.

But with two titles to play for, the Merc pit wall chose to leave Hamilton circulating on older tyres. There was some merit in the decision, as a safety car at that point would have given Hamilton a cheap stop and track position. Merc gambled on this variable.

They also gambled on the leading Ferraris and Max Verstappen in a nominal third in that phase of the race tripping over slower cars that had not yet stopped. Neither worked out and this left Hamilton to pick up the scraps outside the podium places.

In the big picture, though, not much changed as the defending Champ still managed to beat team-mate Valtteri Bottas and extend his lead in the standings – even if that required Mercedes asking Bottas to drive to a target to ensure that Hamilton stayed in front.

“Annoying,” is the word Adrian Newey used to describe Ferrari’s fleet-footedness in Singapore. The Red Bull technical director and his team will have had ambitions of fighting for the win, but instead found themselves behind both Ferrari and Mercedes on Saturday.

Although Max Verstappen maximised what was available to grab third, Red Bull will have hoped for better given the strength of their car on high-downforce circuits. 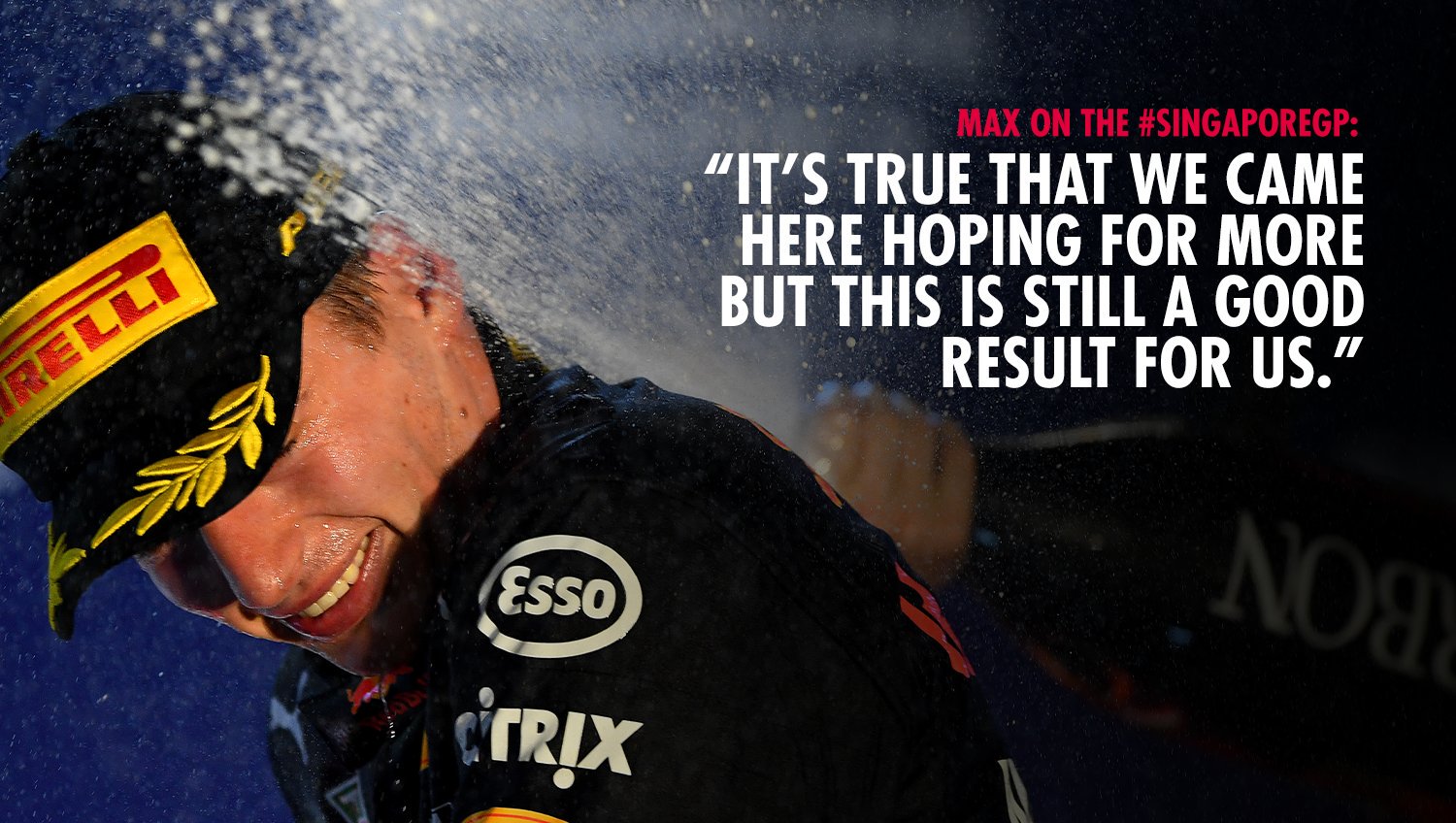 Lando Norris put in yet another assured performance and managed to stay out of trouble to finish best of the rest in seventh. McLaren still lack downforce relative to the big three but the direction of travel in 2019 remains positive.

Both Antonio Giovinazzi and Pierre Gasly ran long first stints on mediums and hards respectively. Giovinazzi even became the first Alfa Romeo driver to lead a race since the 1980s, and survived some late drama (see below) to bring the car home in the points. Credit to the Italian for eking out his tyres and for the most part keeping his nose clean.

Daniel Ricciardo, who started last after being disqualified from a solid P8 in qualifying, was on a roll in the early laps, making a series of bold moves to work his way through the field. The best of which involved launching up the inside of Turn 4 to get past both Racing Points. But a clumsy entanglement with Giovinazzi late on left Ricciardo with a puncture and ended any hopes of a point.