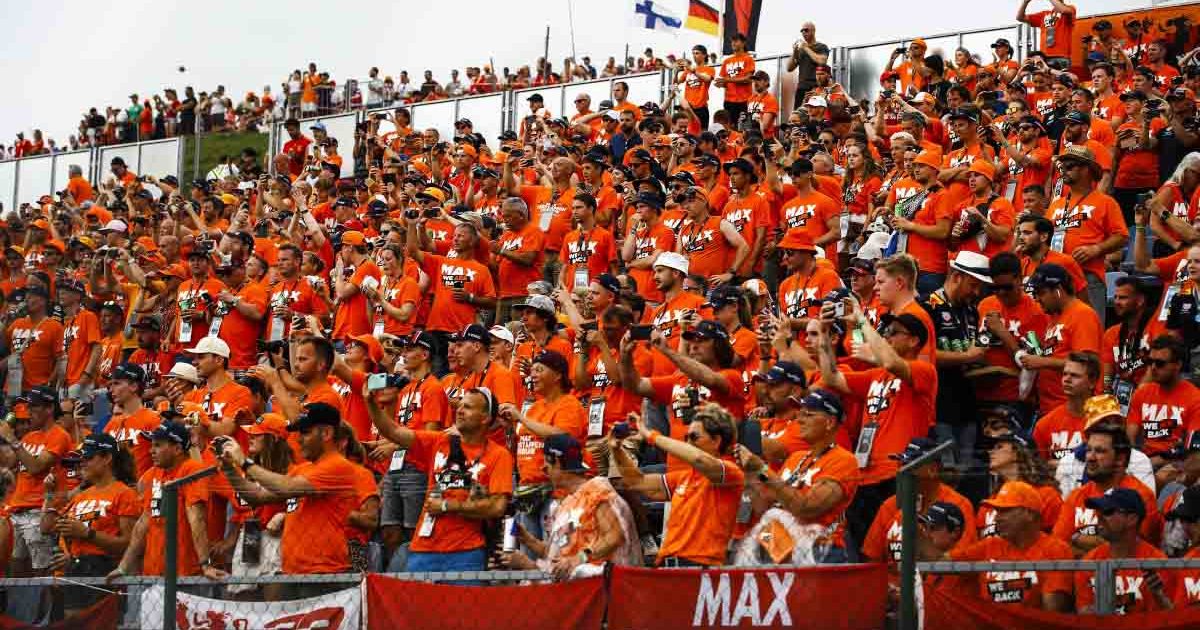 If you thought the sea of orange was big in Austria, Spa and Budapest, just wait for Max Verstappen’s first ever Dutch Grand Prix this weekend.

It might be Formula 1’s first visit to Zandvoort for 36 years, but to Dutch fans, it means they can welcome their hero back on his true home turf for the first time in his career.

While the grandstands may not be allowed to be completely full at the circuit located a stone’s throw from Amsterdam, there will still be more than enough vocal support to go around at the weekend – and you can bet that almost all of it will be directed at one driver.

Although Formula 1 did come back from its summer break for the scheduled Belgian Grand Prix, whether or not you can call it a full ‘race’ has been under the microscope since the events of Sunday.

Verstappen was classed as the official winner on the day after taking pole position, and completing the laps required behind the Safety Car to take his 16th race victory in F1.

Despite the circumstances not being how the Dutchman would have preferred to win in Belgium, the half points awarded still closed his gap behind Lewis Hamilton in the Drivers’ Championship to just three points.

While Mercedes had clawed back their gap in performance to Red Bull in the summer break, practice running showed in Belgium that the pecking order between the two constructors was still too close to call at Spa.

It’s difficult to know where the teams stand after the non-event of Spa, but we won’t have to wait too long to find out what’s in store at Zandvoort – which has gone through extensive renovations to make it ready for Formula 1’s arrival.

Whether or not the circuit will see much overtaking action remains to be seen, however. The fast, snaking layout has only a couple of short straights as obvious passing opportunities, but the track looks as though it will be a significant challenge for the drivers to overcome at the weekend, with banked corners, elevation changes and blind crests to take into account.

It’s likely to be the familiar faces of Verstappen and Hamilton facing off at the front, however. The Mercedes driver is still on the verge of his 100th Formula 1 victory, and where better to achieve that feat than at your main title rival’s home race?

And where better for Verstappen to retake the lead of the World Championship at his home race, for that matter? The fight at the head of the field promises to be yet another intriguing one in what’s shaping up to be a classic season.

As for their team-mates, Sergio Perez endured the embarrassment of crashing on his way to the grid at Spa, but he did not truly suffer the consequences as the race could not be fully started. That said, his retention by the team was announced on Saturday, and that will be a weight off the Mexican’s mind heading into the final part of the year.

The same cannot be said for Valtteri Bottas, however. It looks increasingly likely that he will be leaving Mercedes at the end of the year to be replaced by George Russell, who will be coming into the weekend on a high after flying to a front-row start at Spa, which followed with his first official podium. Although he did not race in anger for it, the Williams driver will not care in the slightest.

This latest qualifying performance seems like a significant milestone in Russell’s career, knowing that he can compete with the fastest drivers on the grid when the playing field is levelled out in the wet.

So George to Mercedes can't be confirmed until Kimi announces his retirement and Valtteri goes to Alfa to replace him. Then once George is confirmed, Alex Albon can go to Williams but he could also go to Alfa because Giovinazzi's contract is up too. #F1 pic.twitter.com/udkwJbId45

There are others on the grid who will want to mark their progress with a strong race result, in ‘normal’ circumstances. Daniel Ricciardo, who ‘raced’ for the 200th time in F1, and Sebastian Vettel both achieved their best qualifying performances for their new teams at Spa with P4 and P5 respectively, but could not show what they could do on race day.

Lando Norris looks to have come back from the summer break and continued his sterling form from the start of the year. Crash in qualifying aside, he felt confident that a top position was possible for him at Spa – and that suggestion cannot be sniffed at either, having looked extremely quick on Saturday.

As for their rivals for P3 in the Constructors’ Championship, Ferrari had an off-colour weekend in the wet, with Carlos Sainz admitting that the Scuderia’s strength in the wet is not what it should be, and there was “something not quite right” in the cockpit. And after half points were awarded at the weekend, McLaren moved slightly ahead of Ferrari in the standings once again.

Further down the grid, it was a damp squib of a weekend for Alpine, after showing promise during practice. Esteban Ocon knew he would have to be realistic about his chances, and Fernando Alonso – fresh from finishing as high as P4 since Singapore in 2014 – could not follow up on his top-five pace on Friday.

The Spaniard will achieve another landmark in the sport this weekend, however, as he will overtake Rubens Barrichello and start his 323rd F1 race – the second highest of all time, behind only Kimi Raikkonen.

As for Raikkonen and his team,Alfa Romeo will want to write Spa off as a non-event, knowing they’ve lost significant ground to Williams in their battle in the Constructors’ Championship, as Nicholas Latifi’s P9 finish made it a second consecutive double-points classification for the Grove-based team.

Mick Schumacher was hoping for rain to come throughout the weekend to try and mix things up in Belgium, but he and Nikita Mazepin could not make their way through Q1 on Saturday, with Haas still rooted to the back of the field.

Whatever happens this weekend, however, you can guarantee Zandvoort will be extremely loud as the Netherlands make a welcome return to the Formula 1 calendar.