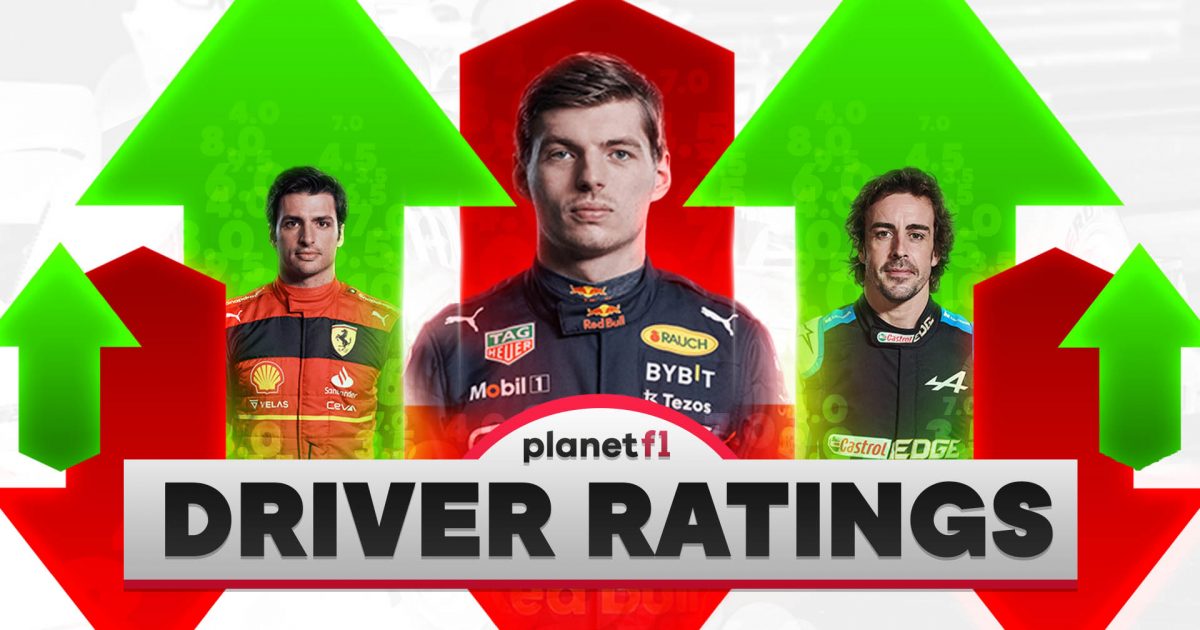 The Ferrari driver had looked to be cruising to his first victory in four races before he lost power, which in turn allowed Red Bull to go on and secure the one-two.

Here’s our ratings of all 20 drivers following the sixth round of the 2022 Formula 1 World Championship:

Max Verstappen: Not even Max Verstappen’s own car could stop him. The Dutchman continued his imperious form by taking his RB18, complete with malfunctioning DRS, to first place in Barcelona.

While there can be no doubt he had luck on his side given Leclerc’s retirement, Verstappen recovered from being blown off the track by a tailwind to take the win.

His battle with George Russell was exciting but fair and perhaps a glimpse and what we can expect from the two moving forward, but once he made it past the Mercedes man, there was no catching him. Sergio Perez will rightly feel it should have been his win, having been told to concede the lead to his team-mate, but that is not for Verstappen to worry about. 9

Sergio Perez: Any driver who celebrates a second-place finish by telling his team “we need to talk” clearly has something they want to get off their chest. Just like his Red Bull team-mate, Perez did not put a foot wrong in Barcelona and it seems his only fault was not being Max Verstappen.

We were all expecting some Checo-style tyre mastery when it looked like he may go for the one-stop, but his pit stops were tactical in allowing Verstappen to pass, but also for Perez to get the fastest lap point.

It was an excellent drive from the Mexican and one that was worthy of a win. 9.5

George Russell: When George Russell signed for Mercedes, races like this must have been why he joined. Battling alongside Mercedes’ biggest foe in the form of Verstappen, Russell produced an excellent defensive performance to keep the faster car behind him for a good stint of time.

He also made an excellent start, quickly overtaking Carlos Sainz before moving over to block off the advancing Perez. It was a deserved podium for the young Brit and one that could not come quickly enough for him given the team’s troubles late on. 9.5

Carlos Sainz: Oh Carlos. With a home crowd urging him on, he got off to the worst possible start when his anti-stall kicked in as he tried to get his wheels rolling. He found himself slipping down the grid before a gush of wind sent him off at Turn 4 during Lap 7.

To the Spaniard’s credit, he recovered to fight his way back up the order and could have caught Russell had there been a few more laps in the race.

But once again, it was a question of what could have been with Sainz failing to get the same out of the Ferrari car as Leclerc can. 7.5

Lewis Hamilton: It is not often you hear a racing driver ask his team if they should retire the car but that was the situation Hamilton found himself in after a lap-one collision with Kevin Magnussen.

His team encouraged him to continue, dangling the carrot of a potential P8 before him, but Hamilton was clearly not happy with just that.

He was one of the quickest drivers on the track, navigating his way through practically the entire grid until he forced himself into contention for a podium. The seven-time World Champion’s drive was deserving of fourth spot but a late problem with the car meant he had to ease off and let Sainz re-overtake him. 9.5

Crucially for Bottas and his tyre management, he knew when to pick his battles such as in Lap 33 when he did not put up much of a fight against the quicker Verstappen. More good points for the Finn. 8.5

Esteban Ocon: If Fernando Alonso is showing the pace of the car without the consistency, then Ocon is providing the latter. His fifth finish within the points and his third P7.

It was a largely uneventful race for the Frenchman as he kept distance from those behind without ever getting within touching distance of those up in front. 7.5

Lando Norris: Out of context, Norris’ race could be seen as an okay performance for someone who has dabbled with the podium places, but given the fact he was suffering from tonsillitis and admitted he felt terrible all weekend, it was an excellent drive.

It could have been better still had he not used an extra centimetre of track in qualifying but given the circumstances, the Brit will be happy with keeping it in the points. 8.

Fernando Alonso: Even Alonso admitted the team sacrificed the weekend when they opted to swap his engine, sending him to the back of the grid, but, powered on by the home fans, he produced what he called a “mega drive.”

He rose from dead last to P9 and was finally able to convert the potential pace of the Alpine into actual points. After the race, he said the performance reminded him of “the magic of motorsport” and it was a drive worthy of the title. 9.

Yuki Tsunoda: Another good race from Tsunoda as he once again beats his AlphaTauri team-mate Pierre Gasly to put it in the points and suggest last time out in Miami was not all just a case of luck.

He is showing a solid improvement from his rookie season and the mistakes that plighted him early on in the sport seem to have been ironed out. 7.5.

Sebastian Vettel: Fought back from a Q1 exit to finish just outside the points in what can be seen as a positive having crashed out last time in Miami.

Another challenge facing the Aston Martin drivers was the task of learning a whole new car in a short timeframe so perhaps it is only fair to judge them against each other, in which case Vettel is the clear winner. 7.

Daniel Ricciardo: Another race of Ricciardo not being able to get the same pace out of the car that his team-mate can.

Having made it to Q3, the Australian would have hoped to be able to use his driving skill to stick around in the points but found himself slipping down the order as the race went on. Work to be done. 5.5

Pierre Gasly: Crashed into Stroll late on in a move that the stewards recognised was a result of a lack of grip, but nevertheless hit him with a five-second penalty and two penalty points.

The team reported he suffered front wing damage in the opening lap, hindering any chance of points, and continuing his frustrating season. 5

feels great to be back in the top 10 again 😎

but it was a tough day for @PierreGASLY as he damaged his front wing on the opening lap which compromised his race pic.twitter.com/7Tw0p01epi

Mick Schumacher: Once again so close for Schumacher in his quest for his maiden point, but the race appeared to just be 20 laps too long.

His performance in the opening half was good as he reaped the rewards of his hard work from Saturday’s qualifying, but as the race wore on and the likes of Hamilton and Alonso appeared in his wing mirrors, Schumacher was unable to defend that coveted P10 spot. 6.

Lance Stroll: Was clipped by Gasly sending him into a spin but still someway off the pace. Beaten by his team-mate Vettel once again having failed to cross the line before the German during races in which both have finished.

In his post-race interview, he said a positive was learning the new package but he will need to learn quickly if he wants to add to the two points currently to his name in Monaco. 5.

Nicholas Latifi: For all you Nicholas Latifi fans, you have something to celebrate as he beat his team-mate Alex Albon for the first time this season.

A largely uneventful race once more spent at the back of the pack having qualified in P19, but he was able to overtake Magnussen late on. 5.5.

Kevin Magnussen: Collided with Hamilton in the first lap and never seemed able to recover. Also blamed the Mercedes driver for the incident when it was at best a racing incident and at worst Magnussen’s fault.

He showed the pace of the Haas in qualifying but will be disappointed he was second last of the finishers. 5.

Alex Albon: From the highs of Miami to the lows of Barcelona, it was a dreadful weekend for Albon. He qualified in 18th as he has done in the last three races, but was unable to produce the same kind of form that saw him rise to P11 and P9 respectively.

He finished behind his team-mate for the first time this season and two laps behind leader Verstappen before being hit with a five-second penalty for exceeding track limits. 4.

Zhou Guanyu: Was heading for a potential points finish before a problem with the car forced him to retire during the first 30 laps. 7.

Charles Leclerc: Did not set a foot wrong all weekend. Topped every practice session before putting it on pole and got away cleanly at the start of the race.

The Ferrari driver was disappearing nicely off into the sunset before his car lost power and cost him what was looking like a certain race win, but for Leclerc as a driver, it was a perfect performance. 10.