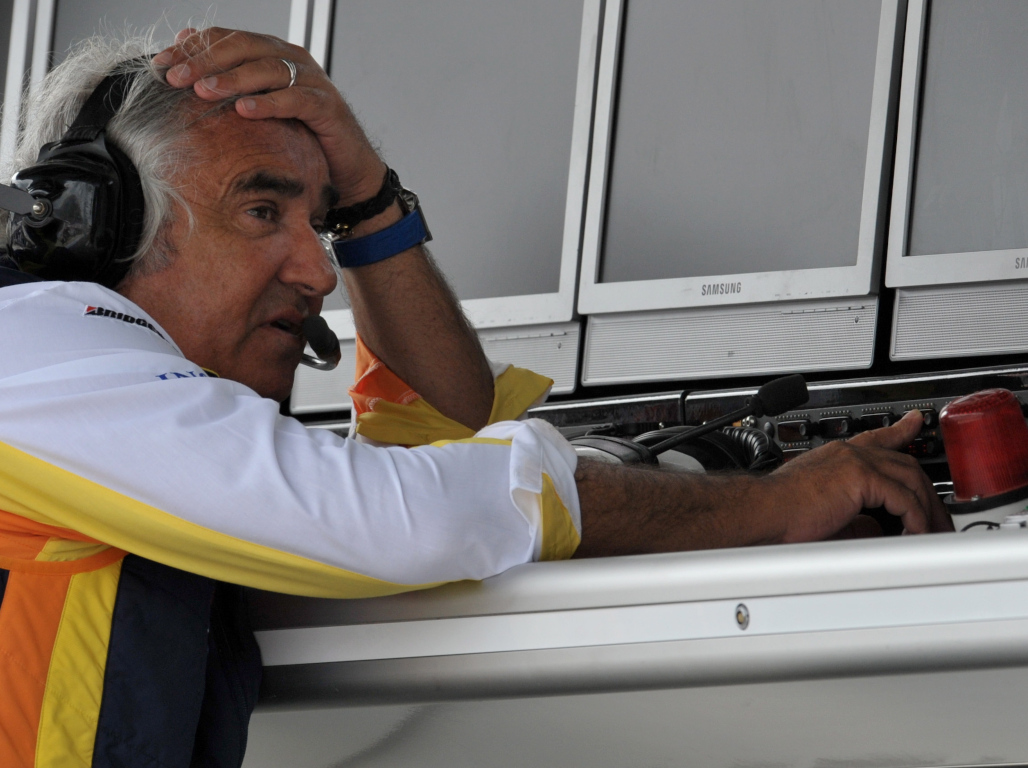 The Italian with his flamboyant presence adorned the Formula 1 paddock for two decades, heralding the rise of Michael Schumacher and, a decade later, Fernando Alonso.

His teams blessed drivers with race winning cars, and then when they couldn’t, he had no qualms in resorting to underhanded measures.

Briatore may have been the force behind four Drivers’ Championship titles but he will go down in F1’s history as the most deplorable/despicable of all the puppet masters.

Benetton arrived on the 1994 grid ready to race and ready to win. Michael Schumacher won the opening two races, Brazil and the Pacific, only for rivals to accuse Benetton of running illegal traction control.

One of those throwing out the accusations was triple World Champion Ayrton Senna.

The FIA took the matter to heart and was set to launch an enquiry only for that to be put aside after the tragic San Marino Grand Prix, a race weekend in which Senna and Roland Ratzenberger were both killed.

Schumacher claimed the Imola win and three of the next four, resulting in growing cries of foul.

Gathering momentum midway through the season, the FIA announced in July that it had analysed Benetton’s black box which contained the engine management software.

Motorsport’s governing body found that Briatore’s team had software “capable of breaching the regulations” but there was no proof that they had used it and therefore no action was taken.

Willem Toet, Benetton’s Head of Aerodynamics in 1994, said in ‘1994: The Untold Story of a Tragic and Controversial Season’ that he believes it was Schumacher’s left-foot braking that had Senna so convinced.

“I think it was the use of left-foot braking combined with the throttle which would have made the strange noise,” he explained.

“It would have been strange to hear the engine working in those places on the track. That’s what I believe is the most likely scenario.”

Benetton, though, was by no means off the hook when it came to cheating allegations.

Schumacher was disqualified from the British Grand Prix for ignoring a black flag which he had been shown after failing to take a five-second stop-go penalty that he had been handed for passing Damon Hill on the parade lap.

Schumacher didn’t pit because Benetton told him not to as the pit wall appealed the stop-go penalty.

The German was banned for two races, Italy and Portugal.

Later that year, at the German GP, Jos Verstappen’s B194 caught fire prompting another investigation by the FIA.

It was found the Benetton had removed a fuel filter that allowed fuel into the car 12.5% faster than a legal fuel valve.

The filter was a safety feature designed to help eliminate the risk of a flash-fire during a refuelling stop.

In 2007 McLaren found itself in hot water, charged with being in possession of unauthorised Ferrari documents.

The saga began with Ferrari’s head of Team Performance Development, Nigel Stepney, being charged with handing documents – 780 pages of technical information – to senior McLaren engineer, Mike Coughlan. Both were fired by their respective teams.

McLaren insisted that none of the Ferrari information had been seen by anyone else in the team, and, after an investigation, the matter was laid to rest. At least it was until McLaren annoyed Fernando Alonso at that year’s Hungarian GP.

The fall out from that saw a second investigation launched with new evidence, which included emails sent between Alonso, test driver Pedro de la Rosa, and Coughlan, brought to light.

On 13 September, McLaren was not only thrown out of the 2007 Constructors’ Championship but also handed a record $100m fine.

Two days prior to that ruling, though, McLaren brought Renault into the dock.

The Woking team alleged that Renault was also guilty of being in possession of secret documents regarding the 2006 and 2007 McLaren F1 cars.

The FIA investigated and on 6 December ruled that “different Renault engineers received and considered four confidential McLaren drawings from [Philip] Mackereth” and thereby had breached Article 151(c) of the International Sporting Code.

But as Renault deemed three of those four drawings unsuitable for its car and was not able to understand the fourth, a drawing of the ‘J-damper’, the FIA imposed “no penalty due to the lack of evidence that the Championship has been affected”.

Briatore, despite his own team’s guilt, threw shade at McLaren boss Ron Dennis.

“Here is a team that acquired an advantage illegally. Just read the regulations: for intellectual property theft the punishment is exclusion,” he said.

“Ron Dennis was the one who protested us on the mass damper. He is not the immaculate saint he pretends to be on his statements.”

Cheating has long been a part of sport and motor racing is no different. But seldom, if ever, has it involved such high stakes – a person’s life.

But that’s the price Briatore was willing to pay at the 2008 Singapore Grand Prix when he ordered Nelson Piquet Jr to crash his R28 to help team-mate Fernando Alonso to the victory. 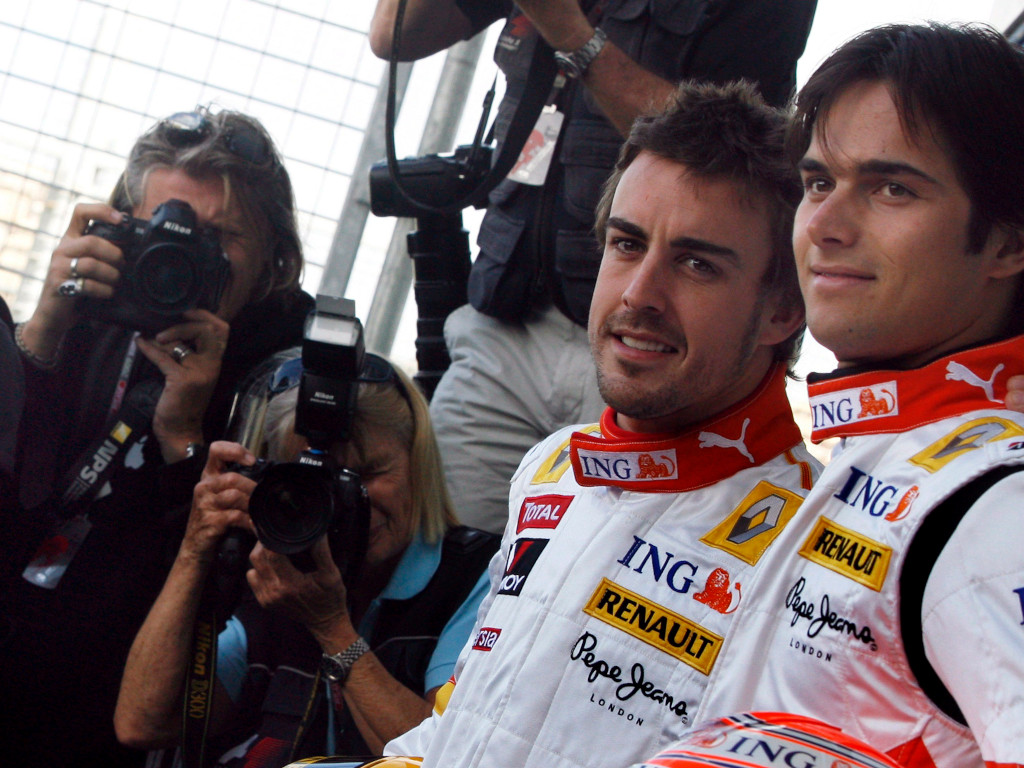 After a wretched season with McLaren, Alonso returned to Renault for the 2008 F1 Championship but the team was by no means in the same position as it had been two years earlier when he had won his second of two World titles with the Enstone outfit.

Alonso arrived at the Marina Bay circuit still chasing his first podium of the season.

Alonso qualified down in 15th place for the grand prix, one place ahead of his team-mate Piquet Jr.

He took the gamble of pitting early, stopping on lap 12.

Two laps later his team-mate, Piquet Jr, seemed to lose control of his car and hit the wall at Turn 17.

The location of the accident meant the Safety Car was brought out, Ferrari botched race leader Felipe Massa’s stop, and Alonso lined up P5 behind the Safety Car.

As those ahead of him pitted, the Spaniard moved up the order to lead the grand prix. A lead he would maintain even after his second stop.

Alonso won the inaugural Singapore Grand Prix, Renault celebrated and Piquet Jr went about his life as a Renault driver. At least until Renault sacked him.

Dropped by the team in August 2009, the Brazilian spilled the beans to the FIA.

“After the meeting with Mr Symonds and Mr Briatore, Mr [Pat] Symonds took me aside to a quiet corner and, using a map, pointed me to the exact corner of the track where I should crash,” he said in a statement.

“Therefore, it was felt that a crash in this specific position would be nearly certain to cause an obstruction on the track which would thus necessitate the deployment of a safety car in order for the track to be cleared and ensure the safe continuation of the race.

“Mr Symonds also told me which exact lap to cause the incident upon, so that a strategy could be devised for my team mate Mr Fernando Alonso.”

Renault was charged with conspiracy to “cause a deliberate crash at the 2008 Singapore Grand Prix with the aim of causing the deployment of the Safety Car to the advantage of its other driver, Fernando Alonso”.

Renault was disqualified from F1, suspended for two years, while Briatore was hit with a lifetime ban and Symonds, five years.

The bans were later overturned by a French court, however, Briatore has never returned to Formula 1 while Symonds worked for Virgin Racing and Williams.