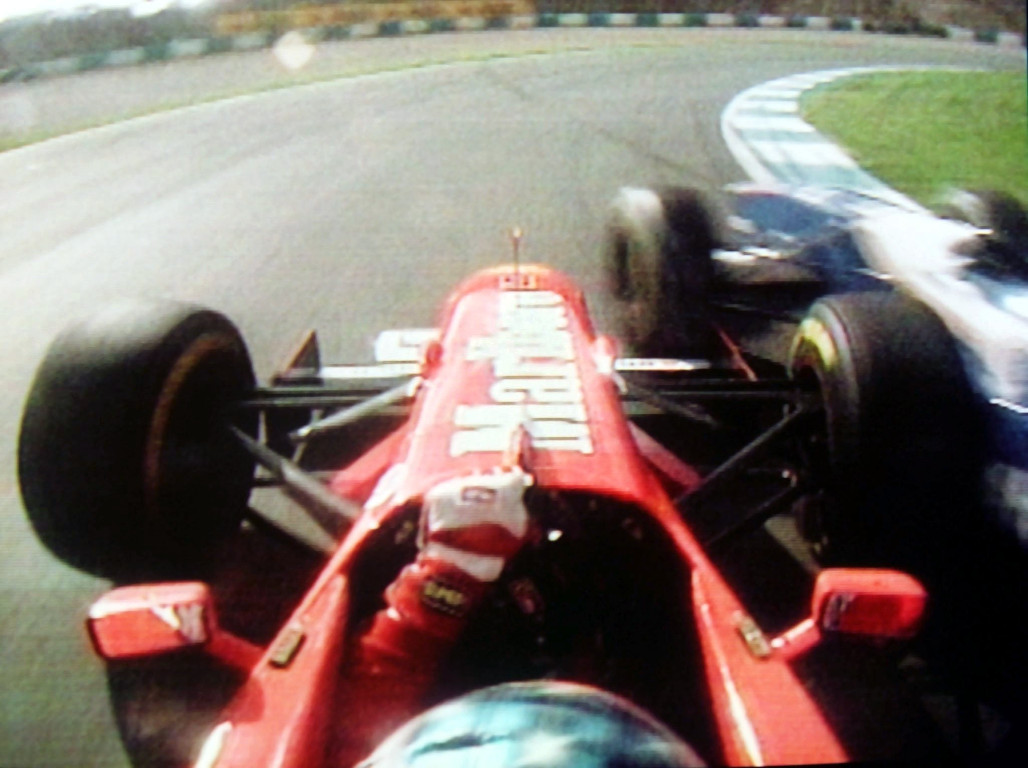 Everyone enjoys a good villain, a common enemy they can rally against and Formula 1 fans are no different.

From Carlos Reutemann to Ayrton Senna to Fernando Alonso, being the villain of the story doesn’t mean you can’t be one of the best.

But perhaps the most unscrupulous of all was also the best of all: Michael Schumacher.

Twice involved in crashes in title-deciders, the German remains the only driver in the history of the sport to have been disqualified from the Drivers’ Championship.

He is also the only driver to have ever won seven World titles.

Fans either loved him or hated him, there was no middle ground with Schumacher.

But even if you count yourself among his most loyal, there is no shying away from the more calculating side of Schumacher.

Schumacher went into the final race of the championship, the Australian Grand Prix in Adelaide, leading Damon Hill by a single point.

The protagonists qualified second and third behind Nigel Mansell but were quick to pass Hill’s team-mate, running first and second with Hill roughly a second behind.

With the pressure on, Schumacher made a mistake on lap 36 as he hit the wall at the East Terrace corner.

Hill made his move, taking the inside line but Schumacher turned in and hit the Williams driver.

Schumacher’s Benetton, which briefly went airborne, suffered heavy damage forcing the German to retire immediate. Hill tried to continue but eventually parked his Williams with damage to the front suspension.

Schumacher won the title by a single point over Hill.

Three years later Schumacher again found himself fighting a Williams driver for the World title, this time it was Jacques Villeneuve.

As in 1994, the German went into the final race of the season, the European Grand Prix, leading by a single point.

He qualified P2 as, while his 1:21.072 was the same as Villeneuve’s qualifying time, he set it 14 minutes after the Canadian had clocked his.

Schumacher made the better start and led the Williams team-mates, first Heinz-Harald Frentzen and then Villeneuve, for the first 40 laps at the Jerez circuit but began to come under pressure from Villeneuve.

Right on the Ferrari’s rear wing, JV went for it on lap 46, diving down the inside. In a case of déjà vu, Schumacher turned in on him.

Schumacher came off second best, retiring immediately while JV, although slower than he was before the incident, brought his car home in third place.

He won the title by three points ahead of Schumacher but that soon became 39 ahead of Frentzen as Schumacher was thrown out of the championship.

The FIA’s disciplinary committee deemed his move on the Canadian to have been deliberate and disqualified him from the Drivers’ Championship.

Schumacher faced the wrath of the German press with the Frankfurter Allgemeine calling him “a kamikaze without honour”.

Stepping into enemy territory at Silverstone, Schumacher and Ferrari courted controversy when he served a stop/go penalty on the final lap of the British Grand Prix.

Leading the race, he was penalised with a stop-go penalty for passing Alexander Wurz under Safety Car conditions.

The penalty was issued with less than two laps to go with the rule saying he had to enter the pit lane within three laps of the penalty being it is issued.

Rather than come in immediately, the Ferrari driver stayed out.

On the very last lap he dived into the pits, crossing the finish line, which runs across the track and extends over the pit lane, to win the grand prix before stopping in his pit box.

A crazy ending to the 1998 British GP as Michael Schumacher (Ferrari) takes his stop go penalty & wins the race in the pit lane! #F1 pic.twitter.com/njLeSsX18X

The stewards hit Schumacher with a penalty for that but it was later rescinded while the stewards all lost their licenses for shoddy decision making.

Winning the 2000 and 2001 World titles, Schumacher went into the 2002 season looking to equal Juan Manuel Fangio’s record of five championships.

He won four of the first five races and arrived at round six, the Austrian GP, leading Juan Pablo Montoya by 44 points to 23.

Barrichello made a flying start to take the lead ahead of Schumacher and lap by lap they dropped Ralf, building up a healthy lead.

Barrichello led after the final round of pit stops but was ordered by then Ferrari team principal Jean Todt to give the position to his team-mate. “It’s important for the championship,” he was told.

He argued with the pit wall for eight laps before he was told that his contract was on the line.

Barrichello slowed for Schumacher on the final lap but only just, finishing 0.182s behind his team-mate.

The spectators at the A1 Ring were furious and jeered the drivers on the podium so much so that Schumacher insisted Barrichello stand on the top step. It wasn’t enough to calm the crowd, nor the FIA.

The two drivers and Ferrari were fined $1 million before the FIA announced that “team orders that interfere with the race result” would be banned from 2003.

2006 was supposed to be Schumacher’s final season in Formula 1 and, while that didn’t happen, it did turn out to be his last with Ferrari.

With two wins in the first six races, Schumacher arrived in Monaco with 39 points, 15 adrift of Fernando Alonso, the man who brought his streak of championship titles to an end in 2005.

Everyone knows in Monaco pole position is of utmost importance, more important than at any other grand prix.

Chasing a fourth pole around the streets of Monte Carlo, which he hoped to turn into a sixth win and equal Ayrton Senna’s record, Schumacher was up on Alonso in the final qualifying segment but the Spaniard was on a flyer.

Schumacher, still out on track, lost it at Rascasse, coming to a halt millimetres away from nudging the barrier.

It compromised Alonso’s lap and guaranteed Schumacher pole. Or so he thought.

The FIA took action immediately, stripping the German of pole position, deleting his qualifying times and sending him to the very back of the grid.

Schumacher’s rivals agreed with the stewards that it was a deliberate move.

Alonso’s team boss Flavio Briatore added: “Given that we are not Snow White and the Seven Dwarves, I think that what he did was unsporting.”

Schumacher maintained that he had done nothing wrong.

“Whatever you do in certain moments, your enemies believe one thing and the people who support you believe another,” he said.

“Some people may not believe it, but unfortunately that’s the world we live in.”