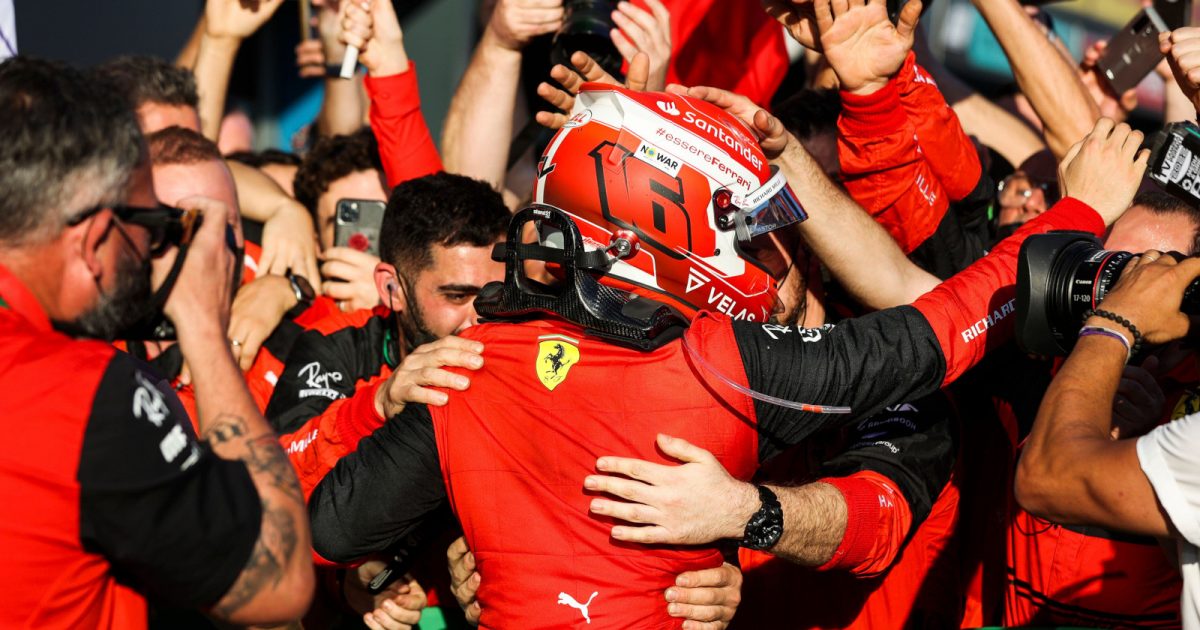 For the first time since 2019, Ferrari are heading to home turf with their sights very much set on victory.

Since Charles Leclerc’s triumph in Monza just under three years ago, the Scuderia have failed to claim a podium, let alone a win, in their five races on Italian soil.

This year though, anything less than P1 will be something of a disappointment, and even a surprise.

Leclerc was in a league of his own last time out in Australia, taking pole position and leading the race from start to finish, setting the fastest lap in the process.

Back on home turf for the week 🥳 🇮🇹

If the F1-75 is as strong as expected, Carlos Sainz may well be his team-mate’s closest challenger. He’ll need a far better weekend than the one he had in Australia though, where a combination of bad luck and errors caused him to qualify in P9 and crash out at the start of the race.

Mattia Binotto has said he’ll let his two drivers do battle with one another, and the Spaniard will be hoping his boss sticks to his word. Mind you, given he’ll be desperate to close the gap to the Monegasque and show he’s more than just second fiddle to him, it’s hard to see him obeying team orders if given them.

Whether Binotto decides to issue such orders or not will most likely depend on whether the Red Bulls pose a threat to the Scuderia.

Max Verstappen and Sergio Perez have both driven well in the opening rounds, with the Dutchman taking a win and looking as good as ever, and the Mexican claiming his first pole position and being much closer to his team-mate.

However, reliability issues forced both to retire from the first race and Verstappen from the third, leaving them trailing Leclerc in the standings by quite some way.

If such issues don’t plague them again in Imola, they should have enough pace to fight for the podium places and maybe even the win. If they do though, one of Ferrari’s former drivers may well be their biggest threat.

Who remembers this epic duel to the flag?! 🍿

Alpine surprised everyone with their pace at Albert Park, where Fernando Alonso would have challenged Leclerc for pole position if not for a hydraulics issue.

Such an issue forced him to start down in P10 and ruined his race, but he’ll fancy his chances of making amends at the circuit where he took one of his greatest victories back in 2005.

The French team expect the track to suit them and are bringing an upgrading floor with them that they’re confident will have a significant impact. Strap in – we could see Alonso fighting at the very front all weekend for the first time in almost a decade.

Such optimism isn’t present at Mercedes, with the German team not expecting to close the gap to the frontrunners anytime soon.

Given their pace though, their results haven’t actually been too bad; Lewis Hamilton’s poor race in Saudi Arabia has so far been the only time a Silver Arrow hasn’t crossed the line inside the top five.

The seven-time World Champion finished behind team-mate George Russell there and in Australia and will be itching to reassert his position as team leader. That won’t be easy though, with his compatriot, who occupies P2 in the standings, looking a match for him thus far.

It’s race week in Imola! Who remembers this? 🤳 pic.twitter.com/goTg7pshCK

Which team is most likely to occupy the final spots in the top 10 throughout the weekend is very much unclear.

McLaren were able to do so last time out and weren’t too far off the Mercs, but Lando Norris for one isn’t hopeful that they can do the same again, feeling that the strong showing was mainly down to the Melbourne circuit suiting the car.

If that’s the case, Alfa Romeo are perhaps best placed to take advantage. Valtteri Bottas scored good points for the second time this year in Australia, and Frederic Vasseur felt the Finn could have finished even higher than P8 if the team executed qualifying better.

Things didn’t go so well for the other Ferrari-powered team, Haas, who failed to score points and looked relatively slow all weekend. The team aren’t too worried though, putting the struggles down to a failure to find the right setup in time, and are confident they can get back into the top-10 in Italy.

So too are AlphaTauri, who are bringing upgrades to the race in the hopes of moving up from the heart of the midfield pack to the upper end of it. Like Red Bull, their main worries will be about reliability rather than pace.

The same can’t be said for Aston Martin, who look to have the slowest car on the grid and are the only team yet to score points thanks to Alex Albon’s excellent drive for Williams in the previous round. Both British teams will need some chaos ahead of them to get near the top-10.

F1 will be hoping such chaos ensues in the first sprint race of the season. It’s fair to say fans aren’t too enthusiastic about its return, but there are a few reasons to be excited about it.

With the 2022 cars able to follow one another more easily, the wheel-to-wheel racing is better than it was last year, making it less likely that we’ll see something of a procession after the first lap as we did last year.

The fact that the top eight cars rather than just the top three will now all score points also makes that less likely and should lead to a few more risks being taken by drivers.

What’s more, if the weather forecast is correct, we’ll get rain throughout the weekend, which is always fun.

Even if it stays bone dry though, with Ferrari heading to Italy looking better than they have for a long, long time, it’s set to be quite the spectacle both on and off track.