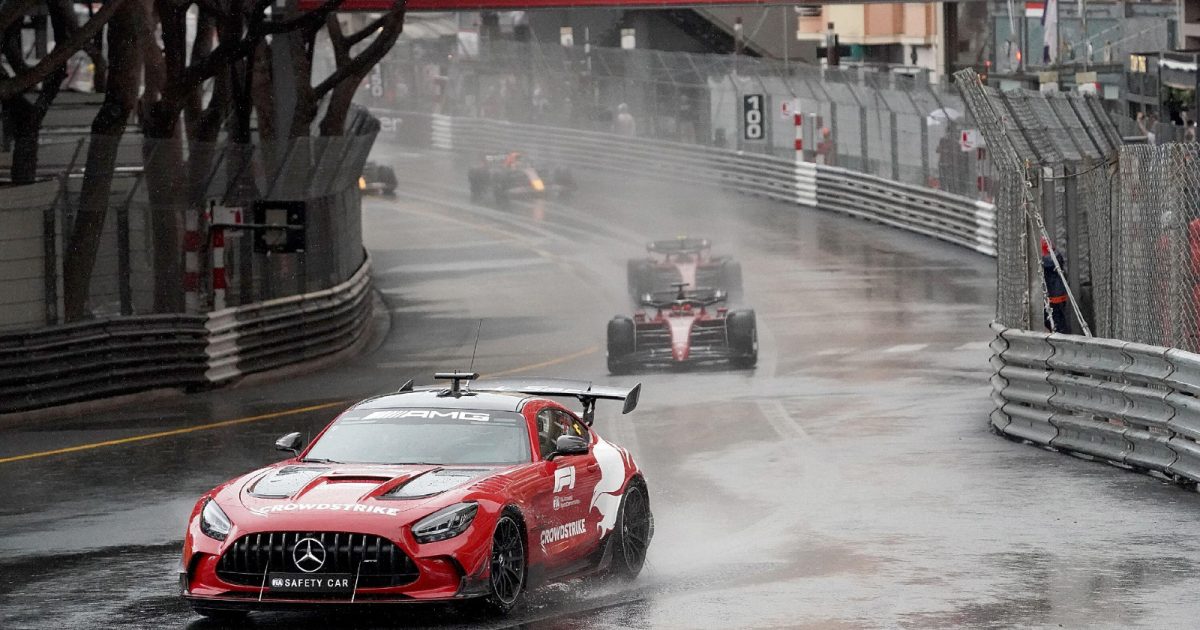 The Monaco Grand Prix’s start was delayed by over an hour due to what seemed like an over-the-top level of caution.

F1 brought up some unwanted flashbacks to the 2021 Belgian Grand Prix in Monaco, due to the race start being delayed by over an hour in what seemed like a farcical turn of events.

The race looked set to get under way until, just moments before the start, rain began to lightly fall on the circuit. A delay of 10 minutes to allow the teams time to swap to the full wet tyres meant a formation lap behind the Safety Car was attempted, but the race was red-flagged as the conditions worsened significantly.

From there, the delays seemed interminable. The rain cycled through varying levels of intensity, while TV commentators pondered about the reason for the delays and the drivers grew restless due to the apparent lack of urgency about getting under way.

Given the fact Race Control seemed to be guilty of watching the weather radar and not going racing because of what was coming further down the line, it led Sky F1 commentator Martin Brundle to postulate that “maybe we should just wait until tomorrow to go racing”.

Some of the most classic F1 races at Monaco have taken place in heavy weather – the subjects of many an official F1 YouTube highlights reel. Who can forget Olivier Panis’ one and only victory in 1996, or Michael Schumacher’s utter dominance in 1997?

Then there were the stellar drives from the young Ayrton Senna and Stefan Bellof in 1984, as well as Lewis Hamilton’s inspired drive in 2008.

All fantastic moments that seem unimaginable as F1 runs in the opposite direction to any form of wet weather risk-taking – perhaps not an unjustified stance given the memories of Suzuka in 2014.

A statement from the FIA attempted to clarify why there had been such a delay to the start of the race.

“Race Control was monitoring a severe downpour that was rapidly approaching the circuit,” the statement read.

“As it arrived during the start procedure, the [Safety Car] start and its associated procedures were implemented. This was done for safety reasons in consideration of no wet running this weekend.”

It would be good if 20 cars went racing in it. https://t.co/EJWpwQcvJj

It also later emerged the reason for the delayed start, as well as the reluctance to hold a standing restart, was down to the heavy rain getting into the electronics and some concerns about the start-light gantry working correctly.

Safety is, of course, of the utmost priority. But given the existence of extreme wet weather tyres, as well as provisions in the Sporting Regulations to make tweaks to the cars to improve their wet weather abilities once a change in climactic conditions is declared, surely there is an argument for simply starting the race on time, letting the drivers and teams figure out which tyres to be on, and red-flag as necessary from there?

A glimpse of what might have been was offered by the F1 app, which showed the Red Bulls and Ferraris due to start on the medium tyres, but McLaren’s Lando Norris, both Mercedes drivers and Aston Martin’s Sebastian Vettel choosing the intermediates. Imagine those four leading by the time the race would have been red-flagged on lap five or so?

Of course, there are other considerations to take into account. The changes to the aerodynamic regulations for 2022 mean ground-effect is of more importance. The 2022 cars are not as good at slow-speed running as the previous generation due to this and, given the raised ride heights and the even slower running of driving in the rain, the downforce suction generated by the current generation would not be a whole lot.

This would mean a greater emphasis on mechanical grip, and heavy reliance on the grip of the tyres and their ability to clear water to allow the cars to dig into the tarmac. The wet tyres, according to Pirelli, can clear 65 litres a second – a seemingly ample figure for most wet weather running.

So the circumstances were there to ensure very difficult conditions for the best drivers in the world to contend with, only for F1 to ensure that spectacle did not happen and that by the time racing got under way, it was almost time for intermediates.

Of course, there is a very pertinent rule change in place nowadays that wasn’t at the time of the aforementioned spectacular wet-weather drives. A financial budget cap of $140million, already stretched to the maximum in light of unprecedented inflation, means teams are terrified of picking up damage to their cars. A wet-weather Monaco GP virtually guarantees significant repair costs for a few – could there be some behind-the-scenes pressure to ensure risk is kept to a minimal level?

It does not help that, this year, the race director does not speak to the media. Former race director Michael Masi spoke with the media after every race in 2021 (Abu Dhabi aside) and was able to outline the reasoning and logic behind decisions made by governance. This does not happen anymore, which means there is an element of guesswork involved in trying to figure out why certain calls are being made.

This is not the time to argue about how other race directors might have done things on the day, given the procedures put in place by the FIA to ensure the rulebook is adhered to as stringently as possible. Eduardo Freitas, highly experienced as an overseer of races, is inexperienced with the intricacies of F1 and seems to have taken a stance of complete risk aversion at this point.

It is an understandable, if somewhat disappointing, stance, as is the lack of communication regarding his choices. However, given Masi’s profile rose to that of a celebrity during 2021 due to his willingness to communicate with the media, the FIA are caught between a rock and a hard place in terms of transparency.

“It was a huge disappointment because I was so excited to see this race going in these difficult conditions – it would have been awesome,” 2016 F1 World Champion Nico Rosberg said after the race on Sky F1.

“And then they delayed it enough to get us into the torrential rain, where then [they] had to stop the race entirely. So it was a window that was missed.”

Paul Di Resta agreed with his Sky broadcasting colleague, and pointed out the issue is likely down to some slight paralysis from the sport’s governing body in the aftermath of Abu Dhabi.

“My thought process was they were on the safe side,” he said.

Fans were robbed of a potentially tremendously chaotic race start on Sunday, with the teams seemingly being saved from themselves, and some inspired strategic decisions – long a mainstay of what F1 is all about – going unrewarded in the name of health and safety.

Instead, F1 provided us with a sanitised, watered-down version of that.