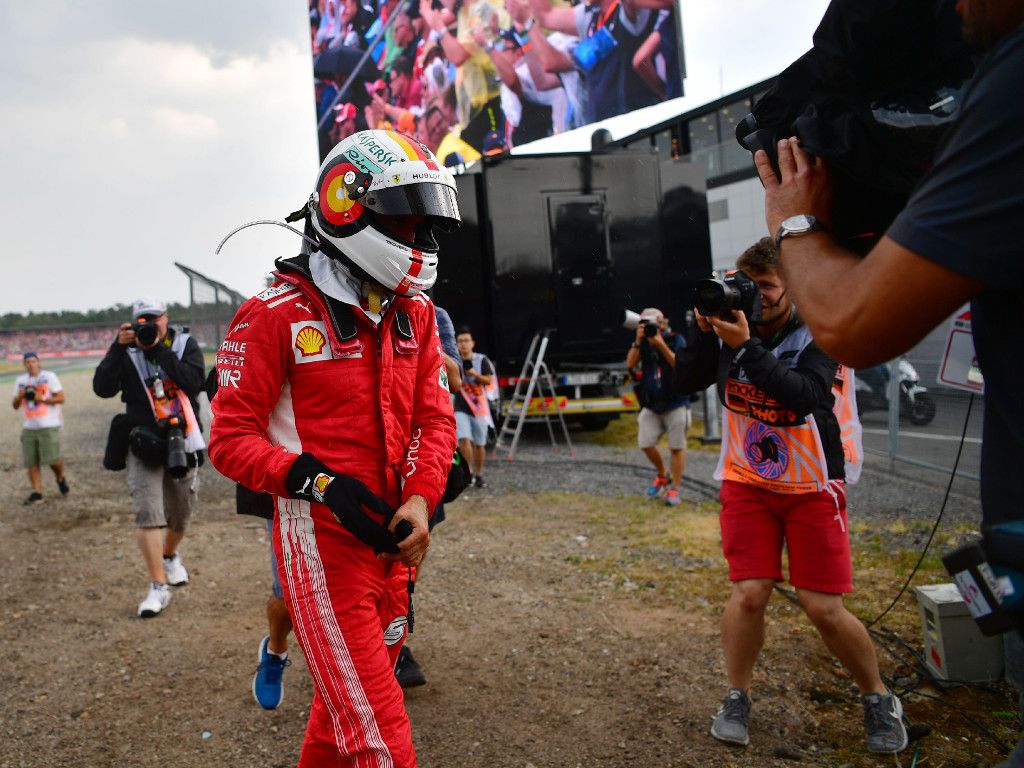 It was meant to be Sebastian Vettel’s year as all the signs pointed toward a first championship victory for the German as a Ferrari driver. At least they did until the Sunday afternoon of the German GP.

Today, in the wake of yet another defeat at the Japanese Grand Prix, Vettel is facing the prospect of losing the World title to Lewis Hamilton – and doing so with three races to spare.

Where did it all go wrong? Who’s to blame?

Ferrari have to take some responsibility given that strategy errors have let the 31-year-old down. However, it is his own mistakes that have been more telling, more costly, more brutal.

Five times Vettel got it wrong in 2018

French GP – crashed into Bottas at the start, penalised

Vettel arrived on the Paul Ricard grid a single point ahead of Hamilton, starting the grand prix from third on the grid to the Brit’s pole position. Valtteri Bottas separated the title protagonists.

Hamilton got a great start while Vettel tried to attack Bottas. Instead he clipped him, damaging both cars.

The incident dropped both to the back of the field after the pit stops.

Vettel was handed a five-second time penalty and finished the race in P5. Hamilton won and took a 14-point lead in the standings.

Mistakes in qualifying can prove as pivotal as those in races as Vettel discovered at the Austrian Grand Prix.

He was punished by the stewards for blocking Carlos Sainz with the “I didn’t see him” explanation not cutting the mustard.

Sainz was forced to take avoid action with Vettel going slowly on the racing line.

The German, who qualified P3, was demoted to sixth and could only recover to third.

Perhaps the worst of his mistakes as it not only cost him 25 points but handed an unexpected victory to Hamilton, and sparked a run of six wins in seven races for the Brit.

Vettel began his home grand prix on pole position and was leading the race when light rain began to fall.

He made a mistake, drove off the track and crashed nose-first into the barriers. His race was over.

Hamilton won to move 17 points clear of Vettel. The Ferrari driver would never regain the lead in the standings.

Italian GP – hit Hamilton, dropped to the back

A key moment in the Italian GP weekend was arguably qualifying where Kimi Raikkonen put his SF71H on pole position ahead of Vettel.

The German was not overly impressed. He told told Ziggo Sport: “I’m not happy how Ferrari managed things on Saturday. I should’ve started the race from pole position. It’s clear for me, I have to race three cars including that of my team-mate.”

Without Raikkonen behind him to act as a defender, Vettel came under attack from Hamilton on the opening lap.

Instead of giving his room and acknowledging that Hamilton got a good run on him, Vettel tried to fight him off.

They made contact, the German spun and dropped to the back of the field.

Vettel’s desire to pass Max Verstappen rather than play the long game and wait for the Dutchman’s penalty to take effect looks set to be the final nail in the German’s championship coffin.

Verstappen, running third, was slapped with a five-second penalty for rejoining the track in an unsafe manner and whacking Raikkonen in the process.

But rather than wait for the Red Bull driver’s penalty to come into play, Vettel saw a gap, went for it, got it wrong.

“If I don’t go for that gap and the gap was there then might as well stay at home,” he said.

He finished the grand prix in sixth place with Hamilton’s win opening a 67pt lead in the Drivers’ standings.