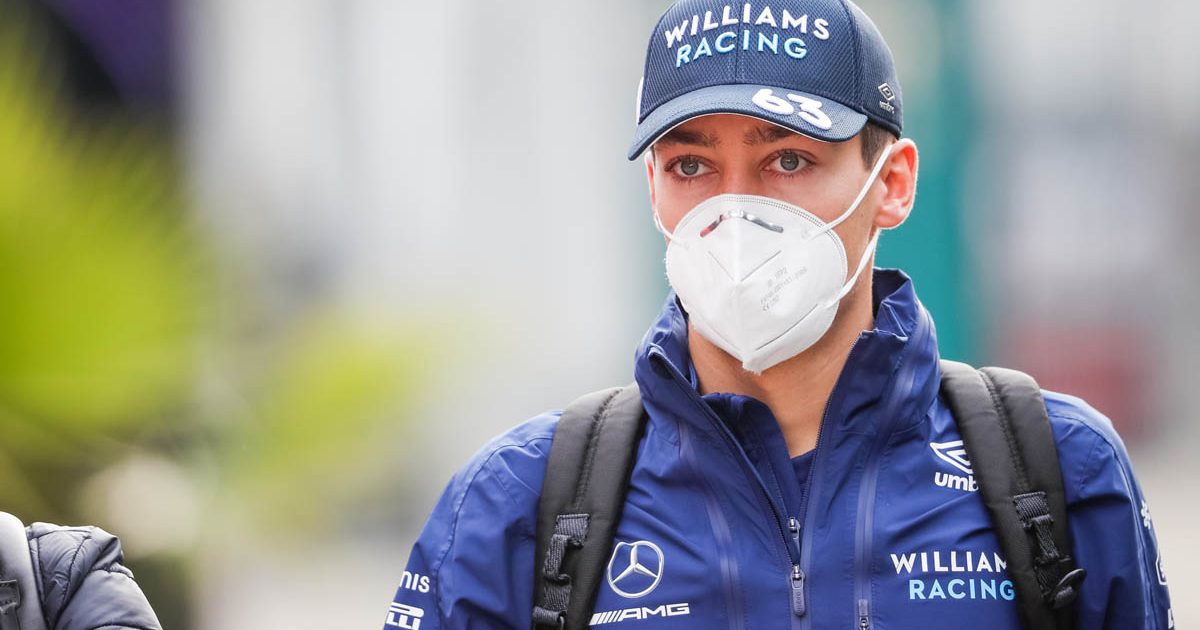 “Yesterday wasn’t my proudest day,” George Russell admitted in an apologetic statement on Monday night after a tempestuous 24 hours following *that* crash at Imola.

The combination of having time to calm down and the studying of replays offered the Williams driver some much-needed perspective after he and Valtteri Bottas came to blows at the Emilia Romagna Grand Prix.

The pair collided at nearly 200 mph heading towards the Tamburello chicane, with Russell heading to the outside of Bottas, dipping a tyre on a wet patch of grass and careering into the Mercedes car, prompting the race to be halted completely after an enormous amount of debris went on track and both cars were wrecked.

As the Brit climbed out of his car and started walking across the gravel, many thought Russell was heading to Bottas to check if he was okay after their massive shunt – but far from it.

Some angry words were exchanged, a middle finger was raised and a helmet was slapped, before the drivers made their way back to the paddock. The Finn in particular looked winded from their enormous impact, but both emerged relatively unscathed.

However, despite his later apology and attempted reconciliation for what happened, one sentence from his post-race interviews still remains extremely relevant in conversation:

“Perhaps if it was another driver, he wouldn’t have done that.”

There, for the first time, rather bluntly, Russell acknowledges that he and Bottas are both in direct competition with each other to be a Mercedes driver in 2022.

With that presumably comes a need for Russell to take any opportunity he can to show why he is worthy of the seat, and cruising up behind a Mercedes he hopes to drive would have been a perfect way to put himself at the forefront of Toto Wolff’s mind.

Amid the furore surrounding the crash, it’s easy to forget the wider context of what was going on at the time. George Russell, in his lower midfield-chasing Williams, was catching and trying to overtake Valtteri Bottas, who was driving one of the fastest cars on the grid.

But it was enough of a feather in Russell’s cap to have been so close to a Silver Arrows car anyway, yet the way he reacted after the incident and in interviews afterwards showed an unattractive side we had not yet seen from the young driver.

He decided to not take the diplomatic approach, but doubled down instead and squarely blamed his rival for the crash – which left some people rubbed up the wrong way as a result – not least Wolff, who branded Russell’s assessment of the accident as “bull****”.

Russell had always shown maturity in his Formula 1 career to date, so much so that he was appointed as the new director of the GPDA ahead of the new season which acted as further recognition of his usual professional manner.

But his emotions really did get the better of him as he described that Bottas had broken a “gentlemen’s agreement” between drivers about making sudden movements during overtaking, as well as questioning whether the Finn was trying to kill them both.

That answer came across to some as Russell talking down to Bottas, a man with treble his experience on the Formula 1 grid.

However, he has since come around and walked back on what he said on Sunday, changing his opinion on the matter after reviewing the crash again and saying his unsavoury reaction was down to being in the heat of the moment, while conceding that Bottas was not to blame for what happened.

“I was more frustrated because of the speed of the incident,” Russell said.

“I’ve never, ever had a crash at the end of a straight when we’re absolutely flat-out, and we’ve all seen the dangers of motorsport very recently and to be honest I would have reacted exactly the same had it been battling for the win, battling for ninth or battling for last. Because I just thought it was unnecessary and it was avoidable.

“As I said, Valtteri did nothing that was outside the rules, but you have to take an element of responsibility and consideration into the fact of the conditions.

“It was unfortunate, the incident would not have happened if it wasn’t damp and if DRS was closed. It was just an unfortunate set of circumstances.”

“Could it have been avoided? Yes. Was Valtteri in the wrong? Probably not.”

Up to this point, Russell had been politely dismissing questions about his future and a possible Mercedes drive, despite “every question” being about his 2022 plans.

But now that the secret of the Briton’s intentions for beyond this season is completely out in the open, the spotlight is going to be shining even brighter on him now from Portimao onwards.

Mercedes were left with a very expensive bill after the crash, Russell’s reflective words will have at least gone some way to him repairing the damage caused.