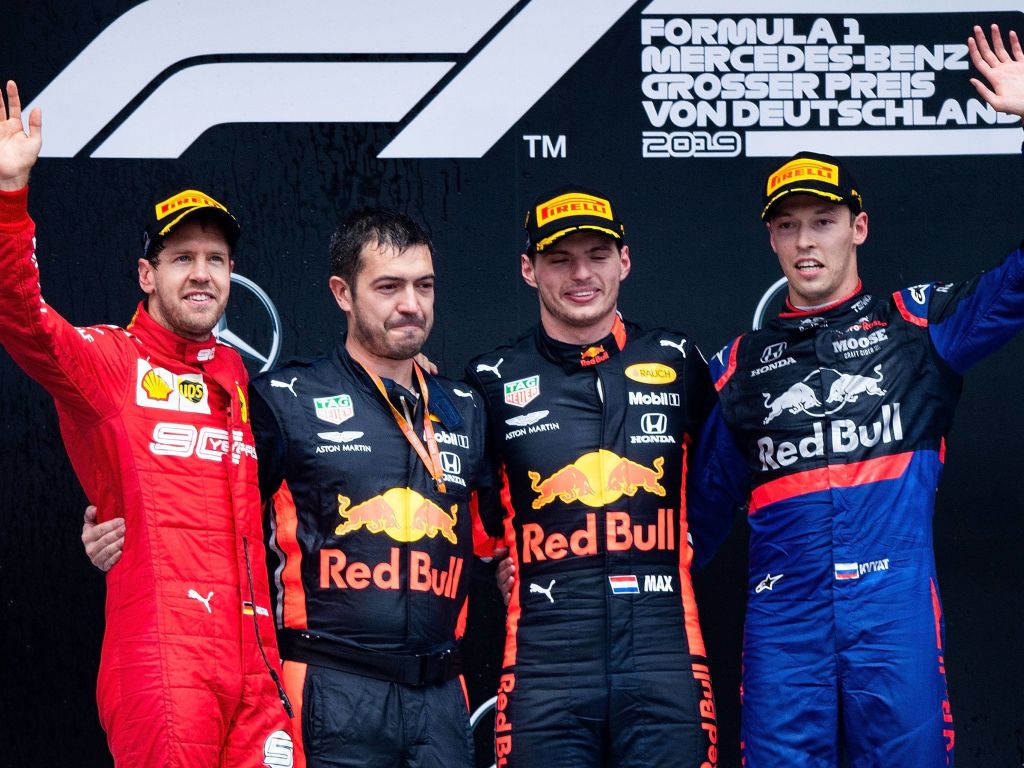 Instead, we saw a much-needed return to form from Sebastian Vettel, Max Verstappen showing his credentials once again in the rain and Valtteri Bottas wasting a glorious opportunity.

Max Verstappen: Where do you even start with this one? Sheer automotive carnage ensued around Hockenheim but ultimately it was a sublime performance from Max Verstappen that won the day.

Except for one pirouette in the final sector, Verstappen was composed throughout even when safety cars ripped away the lead he had gained for himself. He is quite rightly forming a reputation as a master in the rain. 9

Just an amazing win! It was all about not making too many mistakes in these really tricky conditions. Big thanks to @redbullracing and @HondaRacingF1 for the right strategy and great car. Very happy! 👊🏻 #KeepPushing #GermanGP 🇩🇪 pic.twitter.com/N38G7mJyqi

Sebastian Vettel: Vintage Vettel. Something we haven’t been able to say for quite a while. In spite of his qualifying woes on Saturday, Vettel stormed his way through the field to finish second after starting last of everyone.

Calm, clinical and composed, Vettel maintained focus where others lost theirs and he ensured all four wheels remained stuck to the circuit, something that many others failed to achieve.

The question now is whether he can maintain this momentum and use it going forward. 10

Daniil Kvyat: Not even two years ago, Kvyat was unceremoniously dumped from Toro Rosso and left out in the Formula 1 wilderness. The Russian’s comeback reached a new peak here with Toro Rosso’s second ever podium.

Kvyat showed impressive pace in the final stage of the race and got ahead of Lance Stroll, the move that ultimately decided the podium. He was helped a lot by strategy and was relatively anonymous for large parts of the race but what a result to take home. 8

Lance Stroll: It feels weird that Stroll achieved his second highest finish of his career, took home 12 points for SportPesa Racing Point and I’m only giving him a 6 here. The reality is that without an inspired strategy call by the team, Stroll would have languished outside of the points, even with the reduced number of finishes.

Regardless, Stroll deserves credit for doing what so many couldn’t – keeping it out of the walls. The Canadian seems to have impeccable timing and finds himself in the right position at the right time. 6

Carlos Sainz: Sainz’s excellent season continued at the German Grand Prix with another strong haul of points. It didn’t all go Sainz’s way, after all he did have a large spin where he just avoided an early bath but the safety cars plus a strong strategy call got him back into contention and back in the points. 7

Alex Albon: This is a bizarre situation for Alex Albon, he achieved his greatest F1 result to date, finished P6 in a Toro Rosso yet I still feel he was hard done by and deserved more! As high as P4 at one point, Albon turned around his poor qualifying and put himself up with the big guns.

Some great battles with Gasly and Hamilton were wonderful viewing and a pit stop just one lap earlier might have seen him on the podium rather than his team-mate. 9

Romain Grosjean: An excellent qualifying and a P7 result should see the exit rumours quieten down but, if anything, they’ve got that little bit louder.

That’s all because once again Grosjean and Magnussen came into contact with each other when both were running in the points and with just a handful of laps remaining. This could have ended in tears so easily and if we’re pointing fingers, it looks  like Grosjean was the one to blame on this occasion. 6

Kevin Magnussen: It seemed to be ‘Pass Kevin Magnussen Day’ in Germany after not one, but two wrong strategy calls at the start of the race with regards to dry/wet tyre choice. But Magnussen recovered and with, others dropping like flies, found himself firmly back in the points. 7

I’m not going to lie, this hurts. But days like this are sent to test us. We learn from it and move on. I’m going home to try and sleep this off, come back stronger next weekend. Thank you for your continued support. I appreciate you 🙏🏾 And congrats @Max33Verstappen great drive! pic.twitter.com/Do4pVnlWlf

Lewis Hamilton: Adverse conditions, Mercedes’ 125th Birthday race, pole position: the writing was on the wall for yet another Lewis Hamilton masterclass in the rain and for the first half of the race it appeared as if that was the way it was going but a calamitous fall from grace occurred, leaving him out of the points for the first time in a year.

Two massive spins and a 50 second pit stop was uncharacteristic from both Hamilton and the team’s perspective. And yet after all that he extended his World Championship lead by two points after P11 became P9 following Alfa Romeo’s 30-second penalties. 5

Robert Kubica:  There haven’t been many high points to Kubica’s incredible comeback season but this is one of them. For all that is wrong with the Williams car, you have to give the guys credit for their resolve and ability to finish every single race. Kubica’s experience shone through here and following Alfa’s demise, picked up his first point since returning to Formula 1 and first since Abu Dhabi 2010. 8

George Russell: With Kubica seizing the initiative thanks to pitting a lap earlier, this was a rare occasion where Russell was beaten by his Polish teammate but this was still a good performance from the rookie. 7

Kimi Raikkonen – A strong start to the race for Raikkonen but one that ultimately got away from him as others nailed their strategy. As high as P3 early in the race, Raikkonen’s experience proved valuable as he got stuck in with the likes of his old team-mate, Seb Vettel. One big off cost him a few places and then so did the big penalty from the FIA after Alfa were in breach of driver aiding at the start of the race. 7

Antonio Giovinazzi – Another instance where sticking around and limiting big mistakes helped Giovinazzi possibly. Many of the drivers out there have very limited/no experience of F1 racing in wet and intermediate drivers including Giovinazzi but with the exception of a few missed braking zones, Giovinazzi held his own.  7

Pierre Gasly: After encouraging signs came through in Silverstone, Gasly must have been hoping that the form would carry through, after a relatively good qualifying that hope was still alive but it all unraveled from there. The first few laps were littered with mistakes and it didn’t get much better as he was battling with midfield cars, often unsuccessfully.

The end came when he and Alex Albon got too close and any chance of points slipped away into retirement. 5

What a race. Tough day. Lot’s to learn.
Eyes on next week 🏁

Valtteri Bottas: This was a massive chance for Valtteri Bottas but one that was ultimately spurned. He had a fantastic opportunity to take the fight to Verstappen but effectively threw the towel in after a huge mistake.

His race for a time was solid if unspectacular but any hard work was undone with a big shunt at turn 1. Now he needs to look over his shoulder as Verstappen looms behind.  6

Nico Hulkenberg: Hindsight is a wonderful thing but a podium was well and truly on the cards for Nico Hulkenberg here but the wait will have to continue and who knows when the next chance will be.

Hulkenberg put himself in a fine position after racing so well, only to lose the car at the treacherous final corner. His expression post-race said it all. 6

My mistake. A very good race until then. But 1 mistake is enough. I'm sorry for the team and the fans, I'll come back stronger.
📸: @KymIllman pic.twitter.com/KZmfoDbNoT

Charles Leclerc: Roles were reversed here as Leclerc was brought into contention thanks to some good strategic work from the pit wall only to ruin it for himself with a final corner crash.

Leclerc showed some great pace in the wet conditions but was also rather erratic, going off a few times prior to his race ending collision. 6

Lando Norris: Simply put, it just wasn’t Lando’s weekend. An unfamiliar Q1 elimination on Saturday put him in a tough spot and he was one of the few drivers that had their race ended thanks to a technical issue. 5

Daniel Ricciardo: It’s tough to say how much of Ricciardo’s poor performance this weekend came from reliability concerns but, for whatever reason, Ricciardo was not at the races this weekend compared to his teammate. The switch to Renault is still proving to frustrate rather than delight us. 5

Sergio Perez:  The race was all about attrition and making sure you were there at the end of the play. Perez did not achieve this.   4

The German Grand Prix driver ratings are courtesy of the good folks at Late Braking. You can check them out in the following places: