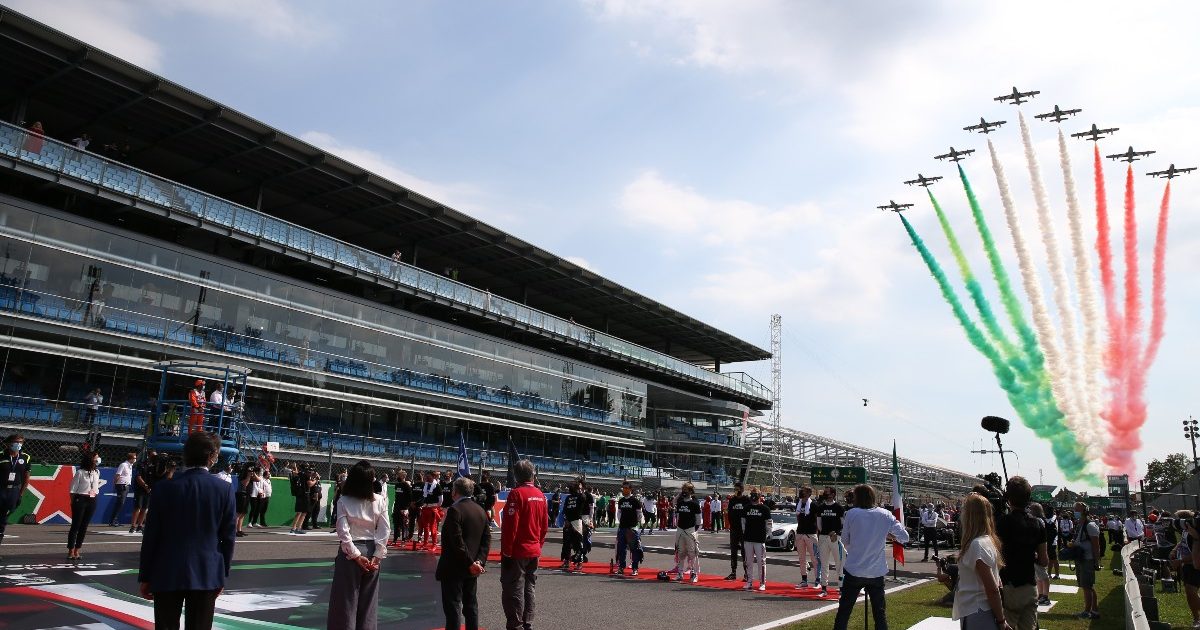 Next up in the 2021 season is an old favourite, with the circus heading to Monza for the Italian Grand Prix.

The title fight is very much back on following Max Verstappen‘s win at his home race last time out, and he now leads the standings again.

Few venues on the calendar can rival the bouncing atmosphere that was on display at Zandvoort, but Monza is one of them.

We missed out on it last year with the race held behind closed doors, but it will go ahead in front of a 50% crowd this year and the Tifosi are sure to make plenty of noise on their return.

They will also get to see two bouts of wheel-to-wheel action as the second trial of Sprint Qualifying takes place on Saturday.

Where does the 2021 Italian Grand Prix take place?

The final leg of the triple-header is here! Next stop: Monza 🇮🇹 Kicking off the festivities, here’s your #ItalianGP poster.#ItalianGP pic.twitter.com/NlmB7gMydu

The Autodromo Nazionale di Monza, located in the north of Italy, is one of the most iconic circuits in Formula 1.

It is a true stalwart of the F1 calendar, hosting the Italian Grand Prix in all but one season, 1980, since the sport began back in 1950.

With long straights and sweeping corners, there are few circuits where higher speeds will be reached, with cars averaging out at around 160mph and hitting over 200mph.

Given that, there are plenty of overtaking opportunities throughout the lap, with the main ones coming at Turn 1, Turn 4 and Turn 8. Unlike at many tracks these days, if you are faster than the car in front and within DRS range, you have a great chance of getting ahead.

In total, the circuit is 3.6 miles long and consists of 11 turns. For many of them, the drivers will not be lifting off the throttle too much. When they do though, they will have to brake hard.

The high-speed nature of the track does, of course, make it very dangerous, with 52 drivers having died there over the years, but changes have been made to make it safer in recent times.

Where can I watch the 2021 Italian Grand Prix?

In the UK, pay-TV broadcaster Sky Sports will provide coverage throughout the weekend, from the start of FP1 to the end of the race. A live stream of their coverage can also be accessed via Now TV. Free-to-air broadcaster Channel 4 will broadcast highlights of both qualifying sessions and the race.

F1 TV Pro viewers can watch all the action from Monza live. Please check to see if F1 TV Pro is available in your country.

The Italian Grand Prix will be shown live on TV on the following outlets in other key markets:

What are the odds for the 2021 Italian Grand Prix?

Here are the latest odds from Planet Sport Bet on the winner of the Italian Grand Prix:

What is the starting grid for the 2021 Italian Grand Prix?

What is the weather forecast for the 2021 Italian Grand Prix?

Directions to the Italian Grand Prix

Monza is a city located in northern Italy, around 15km from Milan.

If flying into the country, the best airport to go to is Milan Linate, which is just 8km from the city centre.

The easiest way for those travelling from Milan to get to the circuit is via train, with a service running from Milano Centrale and Milano Porto Garibaldi to Stazione di Monza every 15 minutes on race weekends.

From Monza station, you can then take a shuttle bus to the track. They run regularly each day and a day return ticket costs €5. Be prepared to walk a bit when you get off, for it takes up to 30 minutes to get to your seats from the drop-off point.

Driving directly to the track is fairly straightforward given its close proximity to the motorway.

One year to the day since Pierre Gasly won the Italian Grand Prix at Monza.

Driving for Ferrari, the German won his team’s home race on five occasions between 1996 and 2006, sending the Tifosi wild each time.

Hamilton’s five wins – one for McLaren in 2012 and four for Mercedes between 2014 and 2018 – have been somewhat less popular with the crowd as he has often fought off a Ferrari or two to claim victory.

He is not the only man on the current grid to have won there multiple times, with Sebastian Vettel doing so on three occasions, most famously in 2008 when he claimed his first ever F1 victory for Toro Rosso, and Fernando Alonso triumphing in 2007 and 2010.

Last year’s race produced a shock as big as Vettel’s win in 2007 with AlphaTauri’s Pierre Gasly winning an F1 race for the first time.

Pirelli took the hardest range of tyres possible to the Dutch Grand Prix, but will be going one step softer for the race in Italy.

With the weather forecast saying it will be warm and sunny throughout the weekend, do not expect to see wets or intermediates in use.