Home F1 Features Get the Lando look: The best Norris merch for 2021 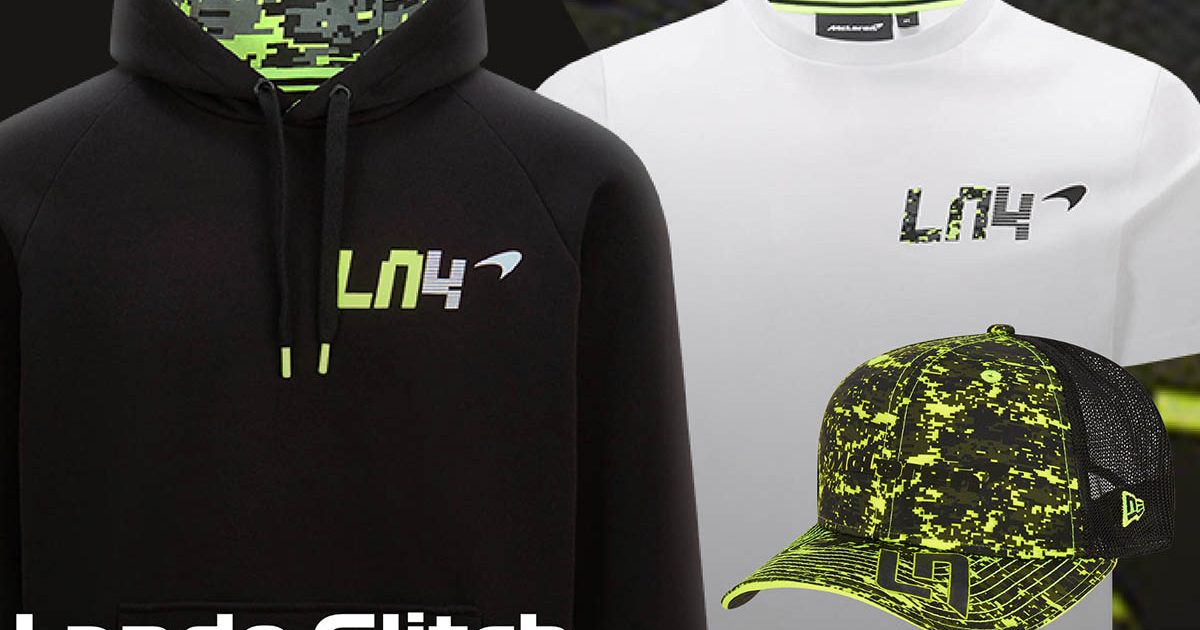 Setting new trends on and off the race track, the 2021 Lando Norris range is a must have for any of his racing, gaming or streaming fans.

In the years gone by it was proving quite the task for Formula 1 to attract a younger audience, a new generation to follow the sport…and then came Lando.

Only 19 years of age when he joined the Formula 1 grid with McLaren, Norris’ cheeky personality both in the paddock and online caused his social media following to surge.

His Twitch streams keep us all entertained, and in fact Norris was somewhat of a founding father as his fellow drivers later flocked to the platform, but Norris’ content remains at the very top of the list.

And as for the race track, there is no mistaking the bright papaya that McLaren sport, a perfect marriage of team and driver who both bring special personalities and colours to the grid.

Norris himself is something of a trend-setter in Formula 1 and his latest McLaren-inspired range is proving very popular.

Norris has one of the most extensive merchandise collections of any Formula 1 driver on the grid.

Whether it be caps, hoodies, t-shirts, or even the iconic bucket hat – the Lando Norris range has you covered.

The options continue still, so have a good shop around, because you can get the Lando look right now through the official Formula 1 store! 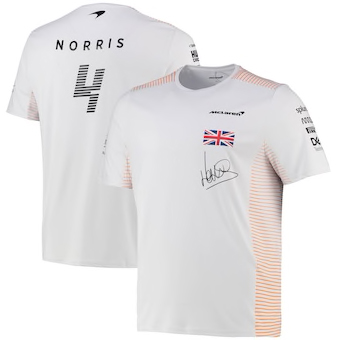 Display your support for Lando and the team with his official McLaren team t-shirt and polo. Both garments have a white base with the McLaren papaya creating a striped effect down the sides.

Both the T-shirt and polo come complete with McLaren sponsor logos and even Norris’ signature! 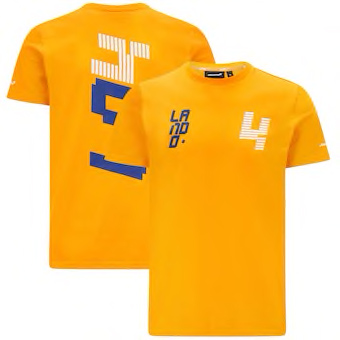 If it is more colour that you are after though, you can get your hands on his Lando Norris LN4 T-shirt, and this will certainly make sure that you stand out from the crowd.

Papaya with a hint of blue, this t-shirt celebrates the signature McLaren colours, complete with front and back graphics inspired by Norris’ name and racing number. 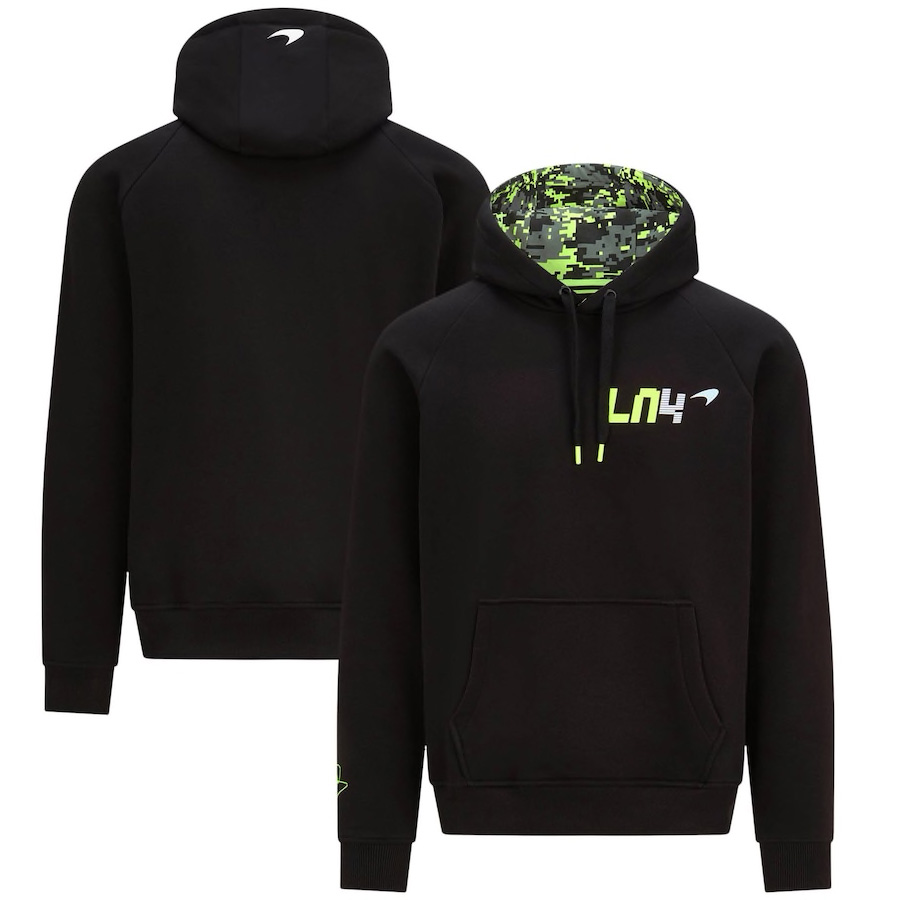 Norris has always made clear his admiration for MotoGP legend Valentino Rossi, and the famous colours of the Italian motorbike racer have crossed over into Norris’ range since he arrived in Formula 1.

Alongside the Rossi tones, the official Norris glitch hoodie also weaves in the Norris’ streaming exploits. The black is brought alive by the neon green shades, complete with Norris’ car number on the chest, sleeve and back. 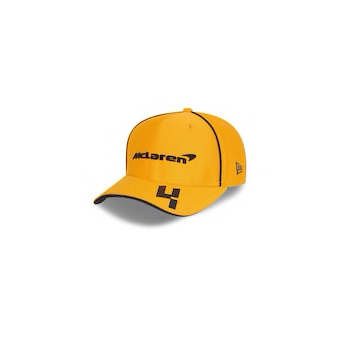 Want to kit yourself out in the Lando Norris headwear? Well, the good news is there are many options to choose from, starting from the caps which come in two distinct designs.

The first is the McLaren-inspired papaya cap, featuring the McLaren branding, Norris’ number four and the Briton’s logo. 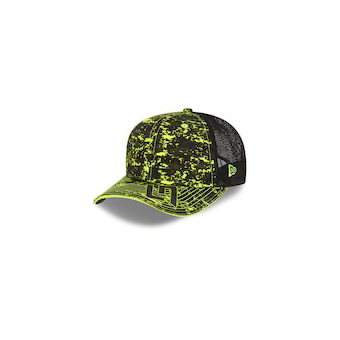 Or you can go for something even more daring in the Norris glitch cap. Like the hoodie this cap takes inspiration from Rossi with the fluorescent lime green speckled design, complete with the Norris logo. 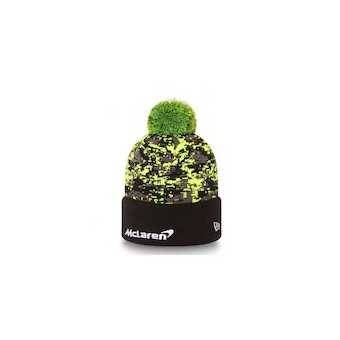 While the caps are perfect for the sunny days, come the winter months it is the Norris beanie hat that will come handy.

The beanie is part of the Norris glitch range with a black bottom, featuring the McLaren logo, followed by the fluorescent green design consistent with the range.

And no beanie is complete without the bobble! You get a bright green one with the New Era Glitch Lando Norris Bobble Knit Beanie. 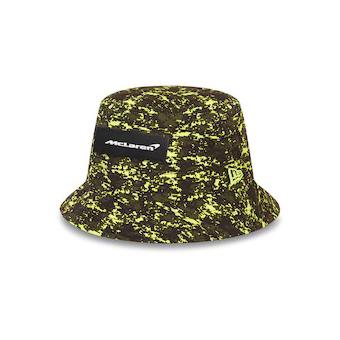 Out of all the Norris items which set him apart from the rest of the grid fashion-wise, the iconic bucket hat is the standout piece of Norris apparel.

Whether sat on the pit-wall or roaming the paddock, Norris can regularly be seen in his distinct bucket hat, and now you can get one for yourself.

The glitch bucket hat sports a camo green base with fluorescent green throughout, while at the front there is a McLaren logo patch crowning off the piece.

Earphones are a vital part of a Formula 1 team and, for the drivers, they help put them in the zone ahead of when the lights out. McLaren, thanks to their partnership with Klipsch, are bringing the latest edition to fans as a fashion accessory!

The Klipsch T5 II True Wireless Sport McLaren Edition Earphones are a statement piece, and Norris has been seen sporting these particular earphones.

The black earphone feature signature papaya ear buds in a nod to McLaren, complete with the McLaren logo in silver on the back.