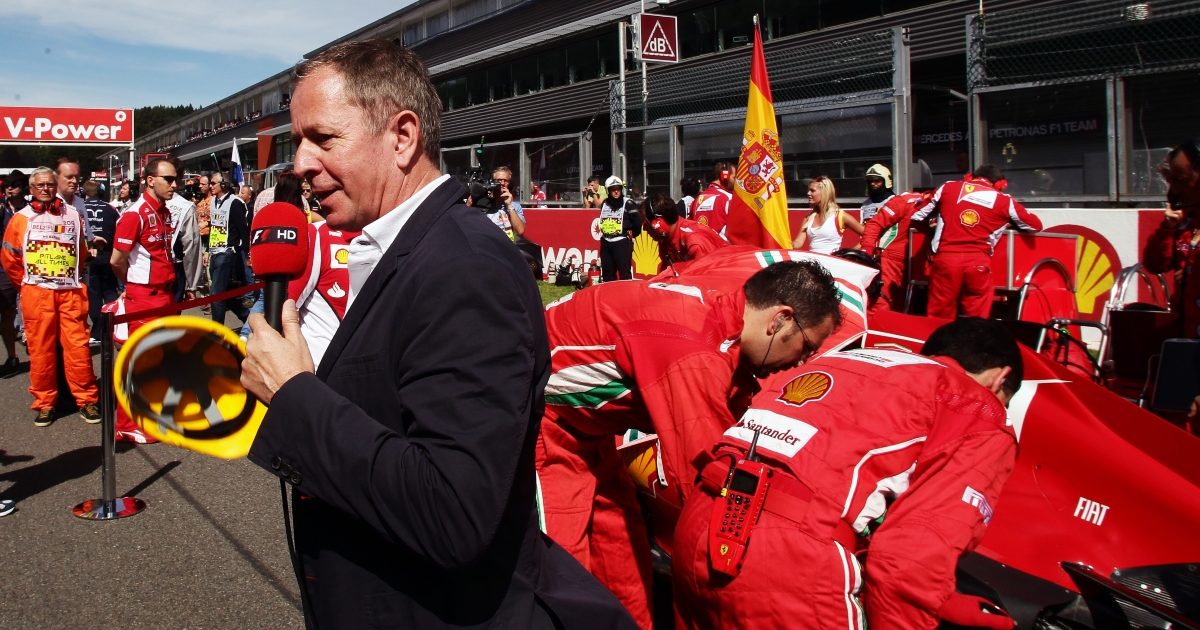 Martin Brundle’s gridwalk returned to our screens with a bang at the United States Grand Prix, immediately reminding us why watching someone simply take a walk around can be so much fun.

He has been doing it for almost a quarter of a century now and has treated us to a number of golden moments in that time with his brash, somewhat chaotic approach.

Listing every such moment would take years, but we have picked out some of our favourites…

Did you know Ron Dennis is quite the practical joker? No, me neither, but the former McLaren boss channelled his menacing namesake when Brundle popped up in front of him shortly before a race.

While the broadcaster tried to interview Bernie Ecclestone, Dennis constantly knocked his headphones off his head, waiting for him to put them back before knocking them off again.

Brundle laughed it off and tried to ignore it at first, but you could see frustration creeping in as he stated “I need to leave my headset on as I need to listen to these people”, which just made it all the more amusing, to be honest.

Bernie was one of the people Brundle chatted to most on his gridwalks back in the day, and their interactions were rarely boring. Perhaps the funniest of them though was when the former driver openly mocked the kingpin of the sport.

At the time, there was talk that the British Grand Prix would move to Brands Hatch and when Bernie was asked about whether the sport would race there, he said “there or Silverstone for sure”, to which Brundle sarcastically replied: “I love it because you’re always so absolutely…you never sit on the fence, do you? You’ve got to be solid, we all know where we stand.”

If you come at the king, you best not miss, and Martin didn’t.

We are not ranking these moments but if we were, this one would be a big contender for the number one spot. Indeed, Brundle himself picked it out as his favourite gridwalk interview ever, and rightfully so.

He got visibly excited when he spotted The Prince of Darkness on the grid ahead of the 2003 Canadian Grand Prix, confident that a quick chat would be rather entertaining, and the 20 seconds or so that followed certainly delivered.

Ozzy replied to Brundle’s first question with a rather incomprehensible answer but his second, after being asked if he had brought his dogs to the race with him, is as clear as day: “No, they’re all at home sh***ing.”

In that same summer, one of the biggest stories in the world of sport was whether David Beckham would leave Manchester United and sign for Real Madrid. Given that, Brundle could not resist when he spotted one of the Spanish club’s star players, Roberto Carlos, on the grid.

When he went to speak to him though, the Brazilian dramatically declared, in very good English, that he did not speak any English. Brundle then pressed on and asked him if Beckham was coming to Spain, and he responded with a quite frankly hilarious, mischievous look that would have no doubt sent the football forums into chaos.

Walking away with a wry smile on his face, Brundle said: “That’s good, ‘no comprende’.”

Pele has presented the 7x WDC with an award

And why was Kimi Raikkonen missing? #Kimi7 #KimiF1 (2006 Brazil) pic.twitter.com/S7JC8SnIIj

This one, from the 2006 Brazilian Grand Prix, needs no introduction. It is, without a doubt, the most famous gridwalk moment ever and arguably the funniest.

Before the start of what we thought at the time would be his final race, Michael Schumacher was presented with a lifetime achievement award by Pele. Most of the drivers were in attendance but Kimi Raikkonen was not.

Afterwards, Brundle asked if he would get over missing it, to which the Finn replied: “Yeah…I was having a sh*t.”

The icing on the cake was Brundle then responding, after having a bit of a laugh: “Obviously you’ll have a nice light car on the grid then.” Glorious stuff all round.

Sent off in Shanghai

As well as celebrities and their bodyguards, Brundle has also occasionally clashed with FIA staff, and watching such a clash ahead of the 2007 Chinese Grand Prix was great fun.

He was intent on interviewing Jenson Button, but found his path to the grid blocked by a member of staff who, for some reason, decided he was not allowed to get onto the tarmac.

Trying to talk the man around, Brundle said “we’ve got Keanu Reeves down there” as if that would convince him to change his mind. It was made all the more amusing by the fact Robert Kubica was right next to them on his grid spot, watching it all unfold with a look of genuine curiosity.

To this day, I still wonder what Keanu’s pre-race thoughts were…

If you think Brundle is an upstanding gentleman, think again. When it comes to getting interviews for his gridwalks, manners and etiquette go out of the window – and that was very much evident in the early 2010s when he wanted a word with Sebastian Vettel.

The then-Red Bull driver was engaged in conversation and Tanja Bauer from Sky Deutschland was politely waiting for him to finish so she could interview him. Brundle then barged in, asked her if there was a queue and after being informed there was, jumped ahead of her as soon as Seb was free before running away laughing afterwards saying he was in trouble.

It was remarkably rude, but the two broadcasters seem to be good friends so we reckon it’s okay to laugh at it.

The roasting of Christian Horner

It’s definitely okay to laugh at this one, in which Brundle produced a one-liner better than anything we have seen in the first three seasons of Drive to Survive.

Ahead of the Singapore Grand Prix, Christian Horner was bugging up the circuit and said with a big smirk on his face: “It’s a shame you’re too old to have driven here really. You would have liked it.”

He probably felt pretty proud of that joke, but such pride would have disappeared when Brundle responded: “I am too old…shame you weren’t fast enough to get to Formula 1.”

Absolutely cold-blooded stuff. If Toto Wolff wants to win the next war of words he and his Red Bull counterpart have, he should ask the 62-year-old for some tips.

Brundle has managed to have a word with a lot of big celebrities in his time doing these walks, but he has also been rejected by quite a few of them including Mariah Carey.

Upon seeing her, he approached and said “Mariah, may I have a word for Sky TV?” as if they were old pals, but was rather emphatically shut down by her entourage.

He then turned to the camera and said: “Okey dokey, I think that’s a no. Oh well, that’s not going to spoil my life.” Quite right too, Martin.

Some nobody to Martin: You can't do that.

Martin: I can, because I just did.

We will end this list with what was undoubtedly the highlight of the gridwalk’s long-awaited return at the Circuit of The Americas this season.

Brundle spotted Megan Thee Stallion and wanted to have a chat but while she was well up for it herself, he was soon ushered away by her security, with one member saying “you can’t do that”.

He responded by saying “I can because I just did”, before later following up with a tweet calling for bodyguards on the grid to show some “manners and respect”.