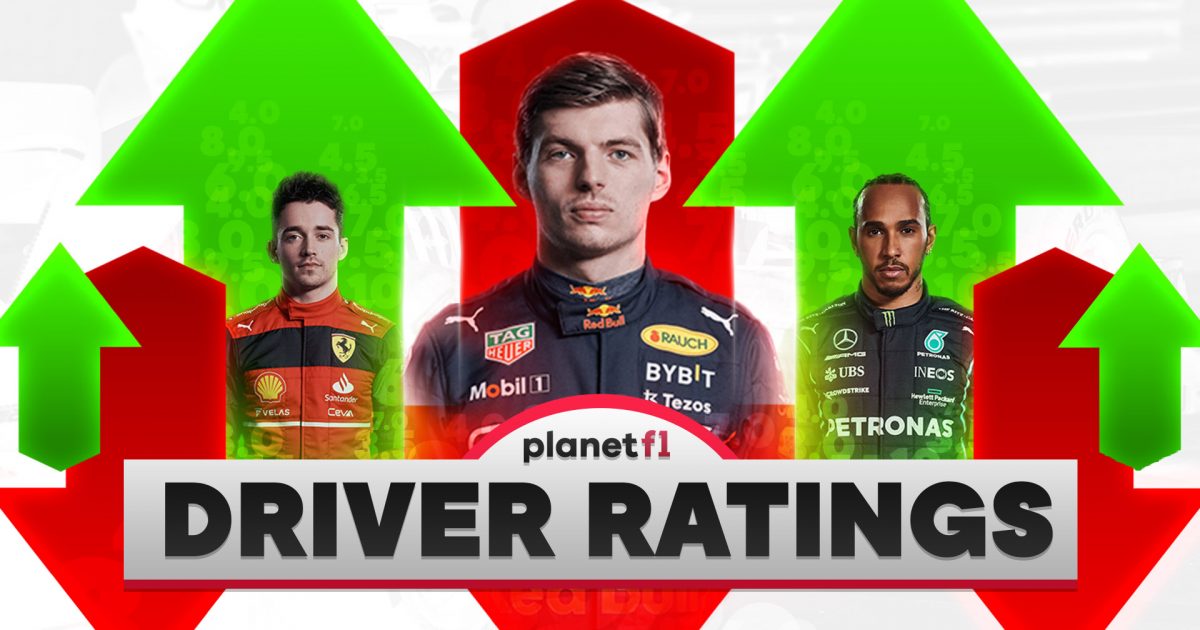 Formula 1’s first visit to Miami ultimately promised more than it delivered – although not as far as Max Verstappen is concerned.

The World Champion made it three race finishes and three wins this season, yet still trails Charles Leclerc by 19 points in the standings after his Ferrari rival followed him home just under four seconds behind.

It was not the Florida thriller the fans had hoped for, but there was some entertaining racing throughout the field. Here’s our ratings for the 20 drivers.

Max Verstappen: No Grand Slam this time because he started third on the grid and it took until lap nine to claim the lead, but nevertheless this was another faultless race for the reigning champion.

Once he had got past Leclerc, the only really anxious moment for the Dutchman was when his chief rival threatened to challenge with DRS after the resumption from the Safety Car period.

But the Red Bull driver kept Leclerc at arm’s length and came home for another masterful triumph. Only nit-picking could deny him a second consecutive maximum rating. 10.

Charles Leclerc: Red Bull’s greater pace was all that caused Leclerc’s undoing as he bounced back with a strong weekend following his Imola mishap.

In the circumstances, he will be reasonably content to head back to Europe with a 19-point lead, knowing Barcelona and especially Monaco – even though he has a dismal record in his home race – should suit Ferrari better.

It was not a completely blemish-free race for Leclerc as a minor mistake gifted Verstappen a bigger lead before the pit-stops, but it’s now four top-two finishes in five races this season. 8.

Carlos Sainz: A return to the podium was just what the Spaniard needed after his early exits in Melbourne and Imola, so this should have boosted his confidence.

However, he was unable to fend off Verstappen in the opening corners, allowing him a free run at his team-mate, and struggled to keep up with the first two thereafter.

No signs here that Sainz, who is still trying to fully get to grips with the F1-75, has the potential to be any more than Ferrari’s number two driver in the short term. 6.

Sergio Perez: It was almost as though Checo had just eaten some of his country’s fieriest chillies the way his temperature rose when he found he was losing power on lap 20, but he soon got back up to relatively normal speed even though the sensor issue continued and left him down on horsepower.

He had one lunge at Sainz to try and grab a podium finish but could not make it stick. But for the technical glitch, Christian Horner thought Perez could have been runner-up again – unfortunately, none of us will ever know. 6.5.

George Russell: Four races in a row Russell has now been the leading Mercedes driver and while fortune has generally been on his side, how far do his results go beyond just that?

Starting 12th after a disappointing qualifying session, he ran a long first stint on the hard tyres and made it work admirably despite unsurprisingly losing places at the start.

Then on fresher mediums, he got past his team-mate after the Safety Car period at the second time of asking, his first effort being outside of track limits. More credit in the bank for Mercedes’ younger Briton, who is undoubtedly also making his own luck. 8.5.

Solid team result after yesterday's struggles. There's genuine pace in this car, we just need to find the key to unlock that performance. 👊 pic.twitter.com/XpBfeoum3h

Lewis Hamilton: Dropping two positions at the start, Hamilton thought his car had been damaged when it banged wheels with Fernando Alonso’s Alpine. But he quickly recovered the places he had lost to the Spaniard and Pierre Gasly.

Ultimately though, despite strategy again not being his friend, the seven-time former World Champion will be wondering how he ended up behind Russell having started six places in front. 6.

Valtteri Bottas: Mistakes by Bottas since he joined Alfa Romeo have been rare, but a couple occurred in Miami and there was a particularly costly one in the race.

Having occupied a solid P5 throughout, he ran wide and brushed the wall to let, ironically, both Mercedes cars through. P7 would have been highly acceptable for Alfa Romeo last year but this time was tinged with regret – and that shows how far they have come. 5.

Esteban Ocon: Having crashed out of FP3 and not taken part in qualifying, Ocon was always going to be up against it from the back of the grid but this was a terrific drive.

It emerged there was some discord over him being asked by the team to defend Fernando Alonso in the closing stages, for no good reason as it turned out (see below). But a strong day’s work by the Frenchman. 9.

Alex Albon: The Williams driver’s lucky red hair dye came up trumps again, just as it had in Melbourne – and he even inherited an extra point this time after an Alonso penalty.

More and more it looks like Williams made exactly the right choice for Russell’s replacement, with Albon improving nine places on his grid slot. 8.5.

Lance Stroll: As was the case with Albon, the travails of other drivers meant someone would drop lucky and pick up an unexpected point or two.

Stroll was promoted above Alonso and Ricciardo because of their indiscretions and had probably not been expecting a top-10 finish when told he would have to start from the pit lane due to a fuelling issue with both Aston Martins. 7.5.

Fernando Alonso: Eighth became 11th on an eventful day for the Spaniard, who was caught up in three incidents that required stewards’ adjudications even after his first-lap collision with Hamilton.

The double former World Champion received a five-second penalty for hitting Pierre Gasly while trying to overtake, then another for gaining a lasting advantage. A third, similar charge resulted in no punishment. A scruffy day for the 40-year-old. 4.

Yuki Tsunoda: AlphaTauri had a bad race all round and Tsunoda, who had shone at Imola last time out, quickly dropped back from his P9 starting spot.

“No grip and no pace – so frustrating,” was the Japanese driver’s take, although he kept it cleaner than some of his direct rivals. 5.

Daniel Ricciardo: Again, a race McLaren will not look back on fondly as they never looked like replicating the heights of their Imola podium.

Ricciardo, like Alonso, was hit with a penalty for leaving the track and gaining an advantage, dropping him two places to 13th on another miserable Sunday for the Australian. 5.

Nicholas Latifi: Put well and truly in the shade again by team-mate Albon, Latifi was struggling to find any positives from his own performance after the race and it is not difficult to see why – although 14th was his best result of the season! 5.

Mick Schumacher: In commentary, Martin Brundle suggested this was close to being Mick’s best race in F1 as he vied for his first points – but then it all went horribly wrong.

It was deemed a racing incident as Schumacher hit Sebastian Vettel at Turn 1 on lap 55, but if anything the Haas driver looked at fault and another good chance to open his account has passed him by. 4.

So near but so far for Mick as he just missed out on his first points in Formula 1 today. #HaasF1 #MiamiGP pic.twitter.com/k9SliYkxdH

Kevin Magnussen: Things were looking promising for Haas early in the race and especially Magnussen until he was passed by Schumacher on lap 35.

A point or two was still possible when he tangled with Stroll at Turn 2 and was forced to retire in the closing stages. 5.

Sebastian Vettel: Like Stroll, Vettel was making useful headway and found himself on course for a points finish when taken out by Schumacher.

At least he has his Question Time appearance this Thursday to look forward to. 6.

Pierre Gasly: Starting seventh, Gasly traded places with Hamilton a couple of times early on but found himself the victim of some typically feisty Alonso driving on lap 40.

The damage the AlphaTauri sustained inadvertently led to the race’s main incident as Gasly and Lando Norris came into conflict. 5.

Lando Norris: A slow pit-stop on lap 19 knocked Norris back into a DRS train on a weekend when McLaren fell down the order after their recent gains.

The incident with Gasly was more the Frenchman’s fault than his as Norris was forced to retire for only the third time since the start of 2020. 6.

Zhou Guanyu: No sooner had Zhou overtaken Ricciardo than he was called into the pits to retire by Alfa Romeo. A pity, and he sounded gutted over the team radio, but it was too early an exit to warrant a rating. N/A.