Home F1 Features Exclusive: ‘When people see me and K-Mag train, they laugh a lot’ 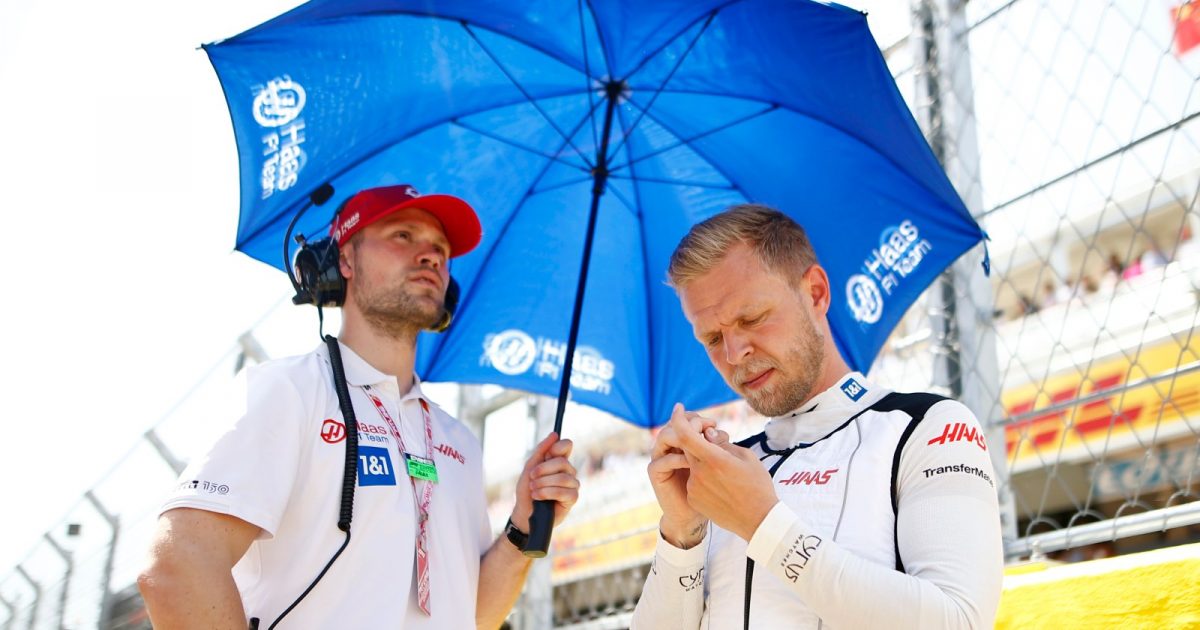 PlanetF1 spoke to one of Kevin Magnussen’s physios about the challenges of getting a driver ready for F1 in under a week and why they get funny looks when they are training.

“It’s crazy,” Nikolaj Madsen told PlanetF1 from his home in Denmark. “I’ve got that question so many times where people say ‘how can it be hard to drive an F1 car?’

“Imagine you go from 350 kilometres per hour to 50 in a few seconds. Normal people can’t understand how hard it is.”

For those on the outside, Formula 1 may not seem like the most physically taxing of sports. Sitting in a car for two hours compared to running up and down a pitch for 90 minutes or across a court for several hours under the hot sun may seem like an easy choice, but for those within the sport they know just how gruelling even a single lap can be.

As one of two physios for Haas’ Kevin Magnussen, Madsen has a better idea than most.

“I talk a lot with Kevin about it. ‘How is it to drive it? How hard is it?’ Normal people can’t imagine how hard it is, even I cannot.

“Some weeks ago, me and Kevin were training and I was just like ‘okay, well let me try this (one of Magnussen’s exercises)’ and it killed me! It was so hard.”

Madsen, alongside Thomas Jorgensen, was given the daunting task of not only getting Magnussen up to speed but doing so in just a week when the Dane was airdropped in to replace Nikita Mazepin before the start of the 2022 season.

“Thomas contacted me one week before [the season started] during the tests. I was just like ‘okay, we need to train Kevin hard, but not too hard because he’s getting in the car’. It was hard to find the balance. He was in okay shape but it’s so different from other racing.”

With speeds of up to 230mph, weight loss ranging from two to three-and-a-half kilos per race and up to eight Gs in certain corners, a grand prix can be a punishing affair – nowhere more so than on the neck.

“Thomas was in Saudi Arabia with Kevin and he texted me a picture of Kevin with tape all over his neck and head. He said Kevin told him after the race ‘I can’t move my head with tape on but after I took the tape off, I still couldn’t move it’.

“It was intense. Kevin, obviously, knew how hard it is to drive a Formula 1 car but I think even he was like ‘damn, it’s so hard – I had forgotten that’.

“He is competitive so you won’t hear him say ‘I can’t drive’, but I could see it in his eyes.”

Madsen spoke of the many hours he spends pushing his hand into Magnussen’s neck – “I don’t think Kevin loves my thumb”, he joked – and while F1 drivers may be spared from some of the contact injuries footballers or other athletes endure, it is by no means smooth sailing.

“F1 drivers don’t have the injuries football players have,” Madsen said. “But [it impacts] the neck, the forearms, his chest, his shoulders and the core.

“They are pretty safe in the car so the injuries are quite low, but the soreness in the neck is the hardest part. There are a lot of headaches and a lot of bad rotation in the neck.”

To combat this, Madsen helped to design specific exercises for Magnussen that while they may make onlookers laugh, give him the strength to keep his head still while experiencing forces eight or nine times his body weight.

“We do a lot of hard exercises, especially with the core, the neck and the shoulders,” he explained.

“We try to imitate the way he is sitting in the car. We think about the turns and what Kevin does with the neck and try to work with that.

“We have a fitness centre where Kevin is training and I think a lot of people just laugh when they see me and Kevin train, because I’m just pulling his head down and just trying to rotate it and hold him like this for four minutes. So they are laughing a lot.”

During his career, Madsen has also trained professional footballers and other athletes but said it was difficult to compare fitness levels across sports.

“It’s a hard question,” Madsen replied when asked how highly he would rank the fitness of F1 drivers in comparison to other sports. “I have worked with football players and athletes, but it’s on a different level. They need to have a lot of stamina.

“It’s like if you take something you can hold in your hands and just squeeze it and try to squeeze with your whole body. That’s how they feel when they drive for two hours. So I think they are very high.

“But of course, other athletes are using other muscles. Like football players, they are good at running, bicycle riders are not that good at running. So it’s hard to compare athletes. But in motorsports, I think F1 and MotoGP is the hardest.”

The result of this hard work was a P5 finish in Magnussen’s first race back in the series, but the hard work did not stop there. Seven races in, Madsen believes his Danish counterpart is physically up to speed but warned overtraining is always a risk, especially in the build-up to a race, and that sometimes all the 29-year-old needs is a kickabout and a slight massaging of his ego.

“During race week, we don’t have so much time for doing stuff like training. So it’s more like trying to play some football or juggle a lot and a little bit of exercise just to get him ready. We don’t completely kill him with exercises because he needs to perform.

“In my opinion, we can treat him a lot so he can get ready, but he can’t have muscle soreness before training and qualy. So we just do some fun activities. In Bahrain, we played some paddle and some table tennis.