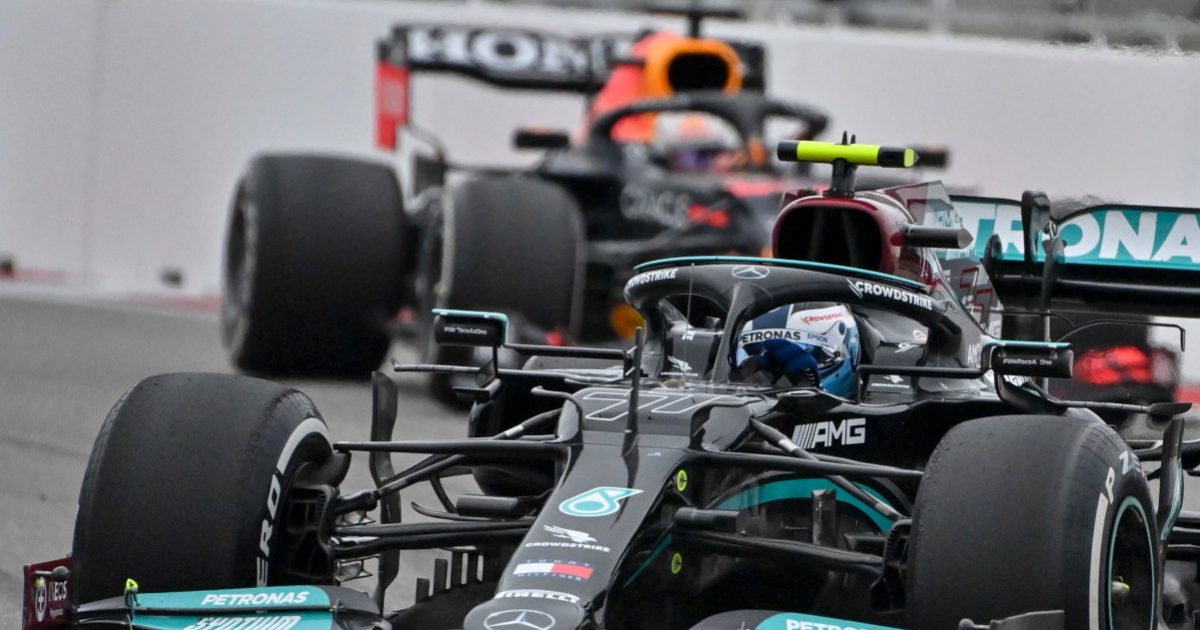 Waving the white flag to Max Verstappen at the Russian Grand Prix, PlanetF1 asks is it time for Mercedes to put George Russell in the car and say farewell to Valtteri Bottas now.

With his marching orders in hand, Valtteri ‘Bollard’ Bottas appears to have already checked out of the Mercedes team, and he’s not even trying to hide it.

Bottas had one job at the Russian GP and that was to hold up Max Verstappen, both starting at the back of the field due to engine penalties. But instead of doing that, the Finn waved the white flag, opened the door, gave the Red Bull driver a pat on the back… pretty much did everything but physically leave the track to give him a path through. It was pathetically easy.

Now I’m not saying Bottas is to blame for Verstappen’s P2 finish, because surely Mercedes are aware that even his bollard skills have been lacking of late. Think back to the Dutch GP, only two races prior, and how simple it was for Verstappen to pass him for the lead after Mercedes had left him out so that he could hold up Verstappen. Bollard Bottas is no longer.

Shoot forward to the front of the field and the same cannot be said of Mercedes’ 2022 signing, George Russell. Running third in the early laps at Sochi, no one could pass – and I’m talking drivers such as Daniel Ricciardo, Fernando Alonso and Lewis Hamilton. Instead they formed a train behind the Williams driver, stuck there until he pitted.

Russell also did the unthinkable, although by now I should be used to it, scoring a point, his fourth top-ten result in five races. Had he earned full points for Spa, Russell would have scored 25 points over those five races, Bottas scored 40 driving a car that’s arguably still the pick of the field.

Surely it is time for Toto Wolff to concede that wingman Bottas is no longer the wingman that he was in past seasons. He’s not even Mercedes’ second best driver, that’s Russell, he’s just at a different team. Yes, Bottas had a good race at Monza, P20 to third, but it would have been to P5 had Hamilton and Verstappen not crashed out. Max did P20 to P2 in Sochi, just saying.

Put Russell in the car, give him seven races to adjust before the pressure mounts in 2022… more importantly put Bottas out of his misery.

After Bottas’ excellent performance in Monza, part of me can’t quite believe this is a talking point but, given how woeful he was on race day in Sochi – one of the very few tracks he can actually excel at – the discussion is more than justified.

Max simply chewed Bottas up and spat him out, the move acting as another reminder (as if we needed one) that Bottas is so poor in wheel-to-wheel combat when he is the one defending. He is about as threatening as a litter of fluffy kittens.

As much as I cannot wait to see George Russell in the car, a year overdue in my opinion, I think Bottas and Mercedes are stuck with each other until the end of the season.

If any driver was to put up zero resistance of leaving his seat early it would be Kimi Raikkonen but, with how long it has taken Mercedes to finally decide on Russell, I can’t envisage them suddenly taking a proactive approach.

The rain really did save this from becoming an even bigger discussion with Bottas somehow finishing P5 and helping Mercedes extend their Constructors’ Championship lead to 33 points.

The Silver Arrows are going to need a lot more luck, it seems, if they are to bring home at least one piece of silverware this season because they are certainly not going to get much more out of Bottas based on this evidence.

After his excellent performance in Italy, it looked like Bottas would remain the perfect team-mate to Hamilton for his final few races for Mercedes and maybe even take things up a notch to ensure he left on a high. And then came Russia.

What makes his shocking showing in Sochi so concerning is that it came at one of the circuits he’s been best at in the past; if he can’t do a job for his team there, it’s hard to see him doing so anywhere.

To make matters worse for Wolff and co, Sergio Perez is starting to look more comfortable in his Red Bull, even if the results don’t reflect it. If not for a poor pit-stop and rain in Russia, the Mexican would have almost certainly scored a podium and may well have claimed victory while Bottas would have failed to score points.

A result like that would swing the fight for the Constructors’ Championship back in Checo’s team’s favour, and Verstappen having a stronger team-mate than Hamilton could give him a big advantage in their title fight too.

Given that, if how Bottas drove last time out is how he’s going to drive for the rest of the year, the team would be mad to keep him over Russell.

He may improve, and he deserves a chance to do so in Turkey – his years of service have earned him that at least – but if he doesn’t, the team would be far better off replacing him with the driver who has been in excellent form and showed last year he can do rather well in a Mercedes at extremely short notice.

I personally can’t see the switch happening, but unless the Finn does well in Istanbul, it really should.

It was after the Dutch Grand Prix that I mentioned Bottas and his false dawns, so this comes to mind again now that it has only taken until Russia for him to be the pushover again.

Bottas is not a good overtaker, nor is his defence anything to shout about, but Mercedes were right with their strategy call to bump their driver down the grid in hope of spoiling Verstappen’s recovery plan.

It really was a smart idea, the problem was the one tasked with executing it. If you could pick any driver on the grid to be your tactical roadblock, very few would choose Bottas.

For his talk prior to the Russian Grand Prix that he is willing to “take one for the team” when needed, his words and actions did not match – Verstappen surely could not have believed his luck as Bottas pretty much waved him down the inside.

I would say perhaps he mistook the blue rain drops on the LED board for a blue flag, but the track was bone dry at that point, so no can do on that one.

So, should Russell be swapped in for Bottas immediately? Well, it would make sense as Russell is to be a Mercedes driver from 2022 anyway, and in Sochi he delivered a masterclass on defensive driving in an inferior car.

But do I think Mercedes will make that call? Not for one moment. While it is a risk which I personally think would pay off, Mercedes will almost certainly not take it with the Drivers’ and Constructors’ title battles so finely poised.