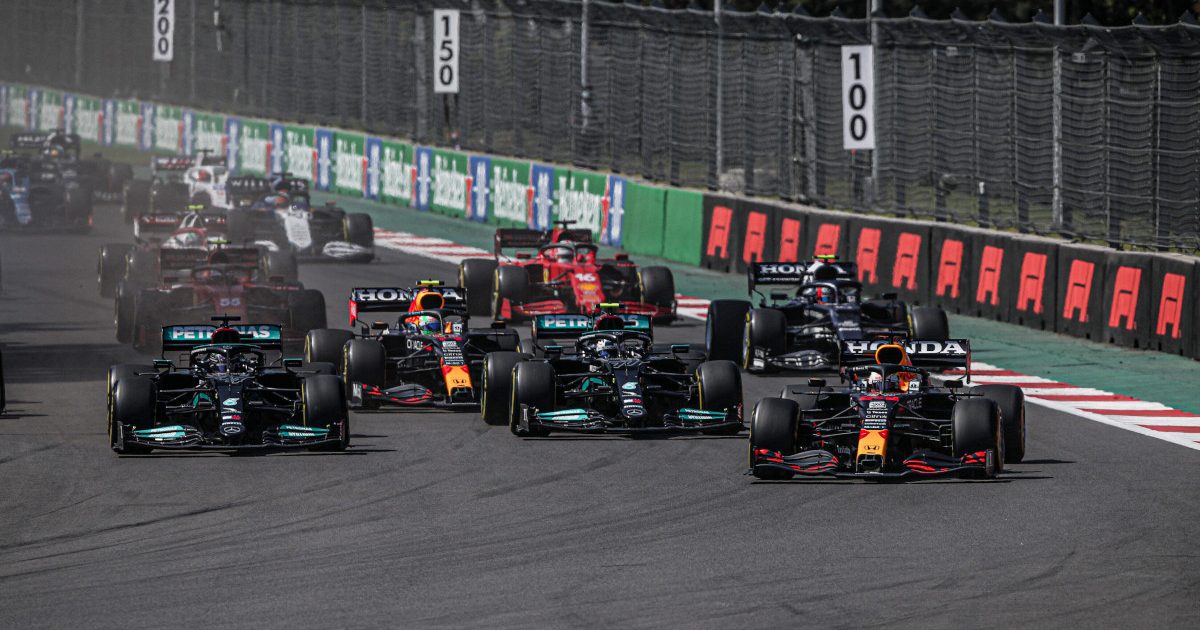 Valtteri Bottas has been blamed by Mercedes for Max Verstappen’s Mexican Grand Prix win, but is that fair on the pole-sitter?

“Opening the sea” and “obviously” leaving the “door open for Max” were Toto Wolff’s and Lewis Hamilton’s assessment of Valtteri Bottas’ start at the Mexican Grand Prix.

And while there has been many a time this season I’ve supported bashing Bottas, version number 7.7 not up to the job, Sunday wasn’t one of them.

The flying Finn had his wings clipped, not by Red Bull, but by the nature of the Autodromo Hermanos Rodriguez and its marathon run down to Turn 1.

Verstappen, starting P3 and behind Bottas on the grid, got into the Mercedes driver’s slipstream, pulled to the left of him as they drew closer to Turn 1, and simply out-braked both W12s.

There is a reason why the pole-sitter in Mexico hasn’t won the race since 2016, and at least two of those occasions, 2017 and 2018, were because he lost the lead in the slipstream created down to Turn 1.

In 2017, Sebastian Vettel was the victim. A rival driver used the slipstream to gain momentum, moved alongside him as they approached Turn 1, they touched and Vettel came off second best.

A year later it was Daniel Ricciardo who started from pole, went three abreast into Turn 1 as he was caught by those slipstreaming him from behind, and he didn’t emerge in the lead. The driver who pipped them both years? Verstappen.

Mercedes should have learned from Ferrari in 2019. That season saw Charles Leclerc hold onto the lead from pole, thanks in part to Vettel and some great team work into Turn 1 that kept Ferrari’s rivals at bay.

So if I was playing devil’s advocate, I’d say Hamilton should have done more to protect Bottas from Verstappen – and then swapped positions with his team-mate later in the race.

I think if you had to pick one driver to predominantly blame for allowing Max Verstappen to be P1 after Turn 1 and go sailing into the distance, it has to be Bottas.

We all know that defending position is a glaring weakness for Bottas and therefore it came as no surprise to see Verstappen find space around the outside and swoop past both Mercedes drivers. If Verstappen had moved inside, sandwiched the two Mercedes cars and then had taken the lead, that’s when we could have placed Hamilton under more scrutiny.

Given the strength of the slipstream effect down the long, long path to Turn 1, Bottas and Hamilton were sitting ducks no matter how awkward they made it for the Red Bull drivers immediately behind them.

Drivers were also warned prior to the race that any forcing off the track down to Turn 1 would be investigated by the stewards, so that acted as another restriction to those desperately trying to defend position.

I also think that to solely look at blaming the Mercedes drivers for their race starts is doing a disservice to Verstappen. Yes, his task could have been made harder, but that was still a bold, emphatic and gutsy move from a driver who you can tell, just from watching that move alone, is oozing confidence.

He opened up the angle to Turn 1 perfectly and had been practicing that late braking point all weekend long, even on his reconnaissance lap on the way to the starting grid. Practice made perfect.

And, even by Toto Wolff’s admission, had Verstappen not had managed to find a way through at the very first corner, he would have more than likely found another way to ensure he was still standing on the top step of the podium. The RB16B car showed the superiority we were expecting to see in qualifying.

Could Valtteri Bottas have made it harder for Max Verstappen down into the first turn? Yes, definitely.

We of course know by now that Bottas is not one to put up much resistance to attacks from the drivers behind, even when it is his team-mate’s title rival Verstappen doing the attacking.

Just like in Russia this was another open door for Verstappen presented by Bottas, and for sure if it was Hamilton on the outside then Verstappen would probably have been on the grass.

However, the main difference this time is that Toto Wolff’s seemingly unmoving defence of Bottas was finally breached. Not only did Wolff criticise Bottas, but so did Hamilton, another rare move considering he is often talking about the Finn as the best team-mate he has had.

It is to be expected that both Hamilton and Wolff finally took issue with Bottas and his questionable defending, since in the case of Mexico it resulted in major implications for both the Drivers’ and Constructors’ title battles.

With Verstappen going on to win comfortably after that swoop around the outside into Turn 1, he now leads the Drivers’ Championship by 19 points over Hamilton with four rounds remaining.

And while Bottas did do his part by snatching the fastest lap point away from Verstappen, Mercedes’ buffer over Red Bull in the Constructors’ has nonetheless been slashed to a single point, so Wolff said that this bonus point saved was of little consolation.

Bottas is in a clear support role to Hamilton in these final rounds, and so his focus should not have been on making it into Turn 1 side-by-side with Hamilton, he should have been looking for the chance to cut off Verstappen’s masterplan.

That is not to say that he would have definitely succeeded, but Mercedes are justified in being upset with Bottas. Lining up directly in front of Verstappen, it was Bottas’ job to keep him behind, not Hamilton’s.

Bottas undoubtedly could have defended more aggressively against Verstappen at the start, but Mercedes also could have put a better gameplan together.

They knew that, with a tow on the clean side of the grid in a faster car, it was likely the Dutchman would have a better run down to Turn 1 than anyone and yet seemingly didn’t have a strategy for dealing with that asides from hoping Bottas could fight him off.

What could they have done specifically? Well, Charles Leclerc is the only man who has started on pole and stayed in P1 at the start in recent years, and he did so as team-mate Sebastian Vettel immediately put himself between the Monegasque and Hamilton, who was starting in P3 that year, halting the Mercedes man’s charge.

There was nothing stopping the seven-time World Champion from doing the same thing himself this year. He’d have had to be very aggressive to get into the gap between his team-mate and his title rival, but it was surely worth a try.

If successful, he’d have prevented Verstappen from taking the lead and probably kept Bottas in P1 which wouldn’t have been an issue given the team could have swapped the two around via team order or strategy.

Sure, Bottas could have done more to try and keep the Red Bull behind, but Mercedes never should have put all their hopes on a man who is notoriously meek when defending his position and leaving at the end of the year.