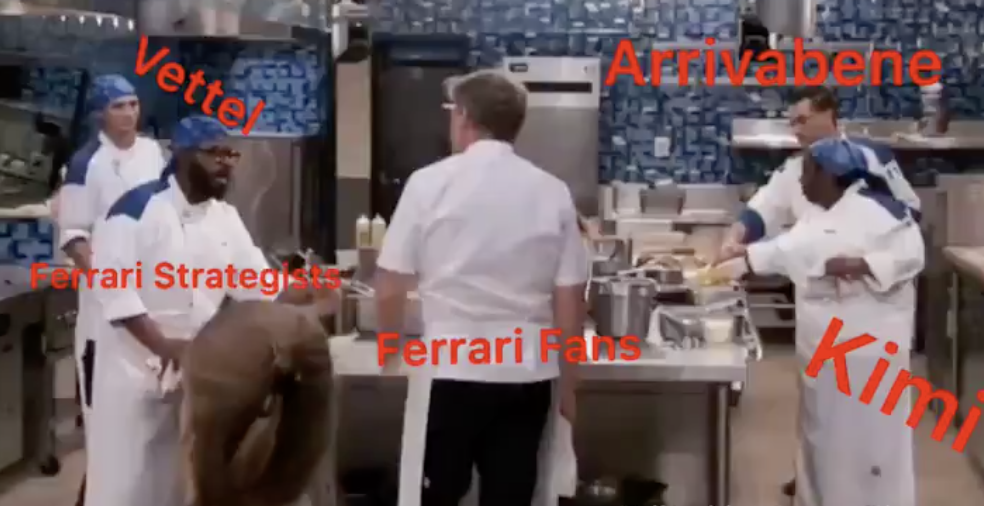 Haikus, Hakkinen and how do Ferrari continue to find new ways to mess things up? Here are the best (and worst) bits from the Japanese Grand Prix weekend.

Without going all Lewis Hamilton on you all, Japan does genuinely have some of the best Formula 1 fans in the world.

Well Fernando Alonso showed off one that was even better this year. Check out that flashing light.

Only in japan 🇯🇵😍

Then, not for the first time this season, McLaren were outshone by Toro Rosso, with the designer even going to the trouble of adding aero rakes. Would not like to be sat next to them though with the fear of becoming blind. 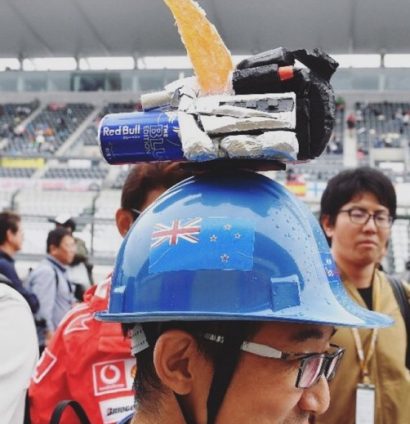 And the Ferrari team aren’t the only ones horsing around. Their poor fans are getting in on the act, too. 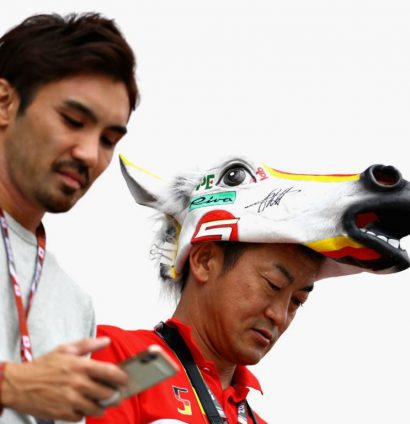 When we stopped sniggering at Ferrari launching a new livery with ‘Mission Winnow’ plastered all over it (Mission Winagesago would have been more apt), part of the branding that was absolute genius was the release of Kimi Raikkonen’s book of Haikus.

This is possibly the apotheosis pic.twitter.com/hep7f8lx73

Kimi’s book of Haiku is the greatest thing I’ve ever seen pic.twitter.com/8X1gl3TkjN

And our pick of the bunch…

Its release sparked hundreds of other attempts at Kimi haikus and, even though the structure of the first and last lines having five syllables and the middle line seven, there were some cracking efforts. Even Mercedes got involved…

Kimi, do the opposite
to Hamilton please.
But I can't even see him?#JapaneseGP 🇯🇵 #NationalPoetryDay pic.twitter.com/O9RER1Cf4N

Kimi’s new-found fame as a poet could have changed him. But he is, and always will be, the Ice Man.

An Ice Man who will do anything to avoid being pestered…

Kimi is just so good to watch.

Strides quickly across the paddock, signs one autograph, desperate to avoid another he ignores everyone around him and marches straight into… the women’s toilets #F1 #JapaneseGP

…especially when you prompt this reaction. 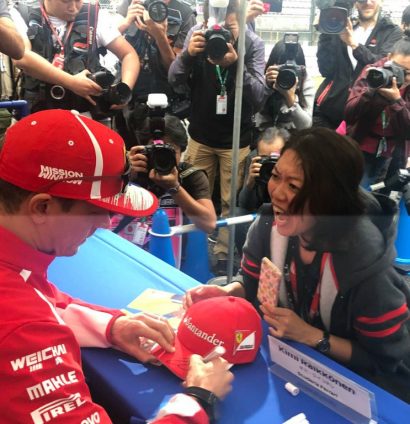 While Raikkonen remains firmly on the quiet side, one man who certainly isn’t is Max Verstappen.

David Coulthard: "With both Ferrari cars behind you, you wouldn't want to get in the way of a Championship battle, would you?

Max Verstappen: "Is it still a battle? I'm not too sure."#F1 pic.twitter.com/Lar1gry4nE

And, when treasuring every remaining minute with Daniel Ricciardo before he departs for Renault, there was a real zinger on his new team-mate on their way to sign some autographs.

If you want to skip the video, then here is what he said…

Ricciardo: “I’m always holding this camera, what are you going to do next year? I can’t hold it anymore.”

Verstappen: “I’ve got Pierre for that.”

Ricciardo and Verstappen were also in good form here, especially the former’s description of the Japanese fans…

Take Ricciardo’s observation and the following image, it all starts to make sense. 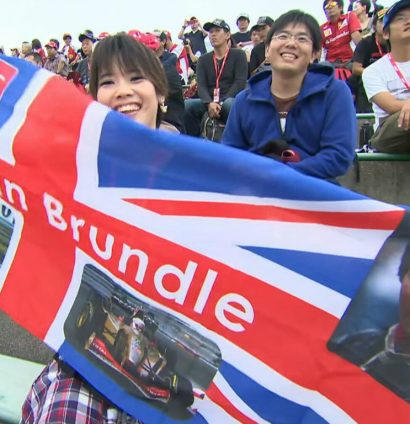 For Red Bull’s junior team, Toro Rosso, the Japanese Grand Prix was the big one. Honda’s home race, a new Spec-3 engine packed in, it was time to make a statement. And tease Fernando Alonso…

But a double Q3 appearance was converted into a grand total of zero points come race day. Serves Pierre Gasly and Brendon Hartley right for becoming so big-headed. 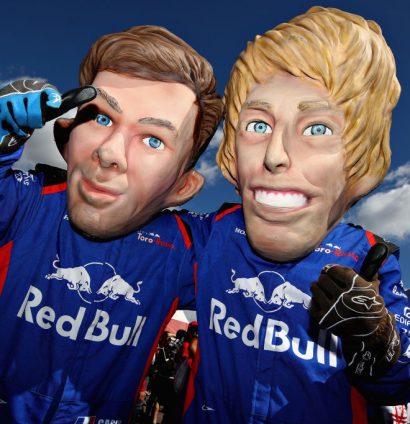 Max Verstappen is liking what he is seeing, though, ahead of Red Bull’s upcoming deal with Honda. You would rather be in his shoes rather than Ricciardo’s in 2019. 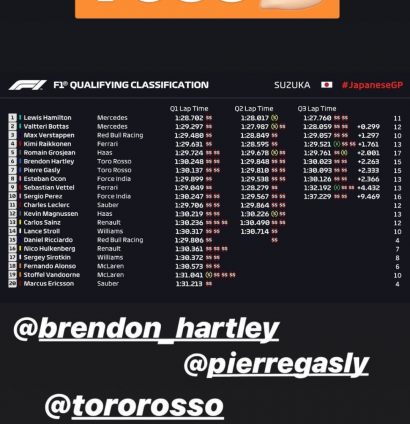 One of the great moments at the Japanese Grand Prix was seeing Mika Hakkinen back in his MP4-13, 20 years after claiming his first Formula 1 title at the iconic Suzuka circuit.

But, an even bigger mistake at McLaren, we suspect, is their tyre choices in Japan.

Does it strike you as a little odd compared to the rest?

Here are the #Fit4F1 shoes destined for the Japanese Grand Prix in Suzuka!
More on: https://t.co/uPnJ1YqUcm #JapaneseGP pic.twitter.com/wCSRcTDzEC

There was a rumour going around that McLaren had forgotten to submit their tyre choices and were given a standardised allocation by Pirelli. It certainly looks that way.

McLaren denied it, of course…

Just spoken to McLaren and they deny any allegation that they missed the tyre deadline for this weekend. They say they chose their tyres as normal and its not the first time this season that people have made ‘interesting’ choices with regards to tyres… #F1

But we still have our doubts.

You could have been a contender…

On the subject of underperforming teams, that moves us neatly onto Ferrari.

This pretty much sums up the reaction of Ferrari fans after another error-strewn weekend.

Being a Ferrari fan in 2018 pic.twitter.com/DMTHqShiSi

From serious title contenders to the butt of all jokes. It’s sadly a familiar feeling.

Ferrari have given up on 2018 and are now concentrating on how to lose the 2019 title.

And coming to a cinema screen near you…

Film companies wanting to make a comedy should make a film on Ferrari’s strategy calls of 2017 and 2018. Would make a fortune.

The drivers' parade – usually a time to relax ahead of the race, and take a backseat as you experience the track at a leisurely pace 😊 Not for Sebastian Vettel, though 😂 . #F1 #Formula1 #JapaneseGP #Suzuka #Vettel #Seb5 #Ferrari @scuderiaferrari @suzukacircuit_official 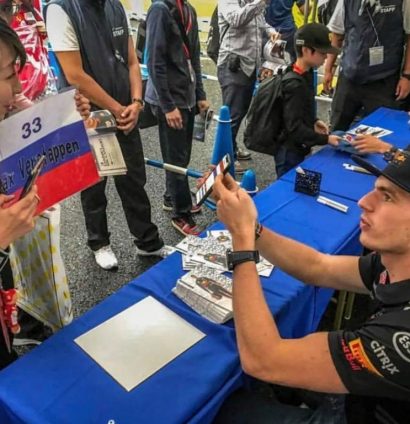 Returning from the kitchen to the TV ten minutes before the race is about to start #F1 pic.twitter.com/0rREErjAxb

Force India’s administration revealed they owed money to absolutely everybody. And we mean everybody.

Also, I don't know what 'Hire A Princess' is or why an #F1 team would need it but Force India owed them £175… pic.twitter.com/goBF17mtjS

Mercedes boss Toto Wolff gives us all we have ever wanted…

Lando Norris is taken on a wild ride in a hilarious new feature as part of Formula 1’s official live coverage.

The most confusing and hilarious two minutes of my life 🤯😅 #F1Livehttps://t.co/yGyaEjFPOf

And incredible footage has been revealed about what it has been like for Daniel Ricciardo going up against Mercedes and (early season) Ferrari this year.

The Honey Badger has the reputation for being the most fearless animal on the planet, and for good reason. pic.twitter.com/qTJI30vmGa

There was so much for Lewis Hamilton to like in Japan. So much… 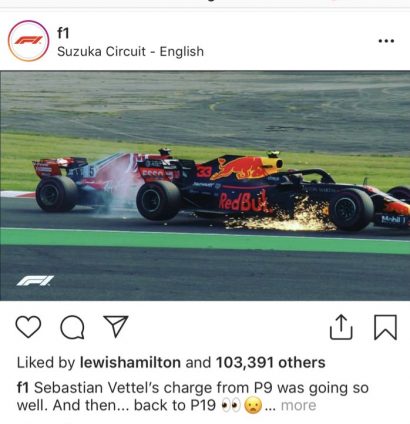 Catch you again after the Get In There Lewis Grand Prix in Austin, Texas…