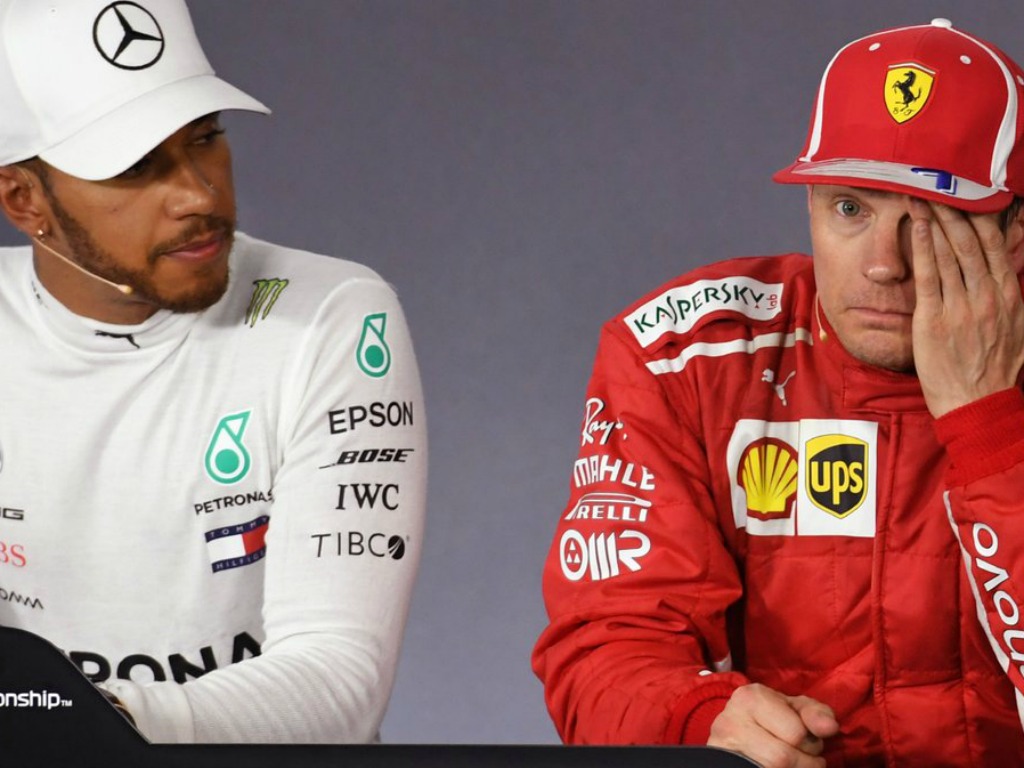 Mercedes turn both Jekyll and Hyde, Red Bull and Toro Rosso form the Spice Boys, and there was a football match on don’t you know?

It’s the best bits from the British Grand Prix…

In the lead up to the British Grand Prix, we of course had the news that times were a-changin’ at McLaren with racing director Eric Boullier resigning from his post.

Poor Eric got very hot under the collar in Austria when asked about his future…and the impact of Freddos as a reward system.

Adverts are a pain in the arse 99.9 per cent of the time. But sometimes, on that rare occasion, they do make us smile. 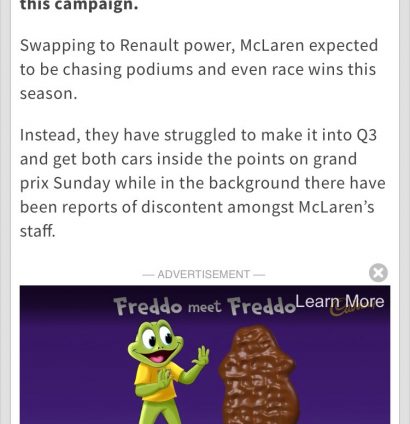 How about that product placement?

We were also reminded of David Coulthard’s brilliant response to being given the cold shoulder by Boullier back in 2015.

The fact that video is three years old and is still relevant to this day says it all.

And it’s going to take some time for a certain reporter to get used to the changes. Oh Ted.

But McLaren have finally cracked it courtesy of a lightbulb moment from the big boss himself, Zak Brown.

He said at the British Grand Prix: “I think we need to operate like a race team.”

Guenther Steiner on Grosjean’s crash and K-Mag’s incident with Alonso: “Now it’s just a normal day at the office – one car we need to change the chassis and the other car the driver is with the stewards.”

Force India owner Vijay Mallya on why doesn’t seek a cease and desist order against continued buyout claims: “Don’t I have enough legal cases to take care of? You want me to get involved in one more?!”

And Sky Sports F1 commentator David Croft during the race: “And Magnussen beats off Gasly!”

Lewis Hamilton: “But in terms of car performance, yeah, for sure, we’ll be to extend…spread the legs of the car more here.”

And last, but not means least, Kimi Raikkonen after a collision with Hamilton, an epic duel with Max Verstappen and another podium finish.

Interviewer: “Kimi, how was your race?”

It was an unfortunate end to the British Grand Prix for Max Verstappen, a late DNF bringing an end to his recent revival in form.

Thankfully his beloved press was on hand to keep him in good spirits over the weekend. 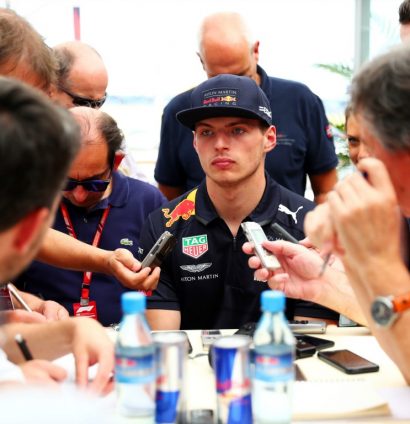 Uncensored onboard reaction from Max when he had to retire.. 🗣️#F1 #MaxVerstappen #BritishGPpic.twitter.com/QLB5SnlzzL

Before we get into the nastier side of Formula 1. It was lovely to see Fernando Alonso acknowledge Charles Leclerc after their battle..in FP2 of course.

They have certainly seen a lot of each this season, but talent is recognising talent. 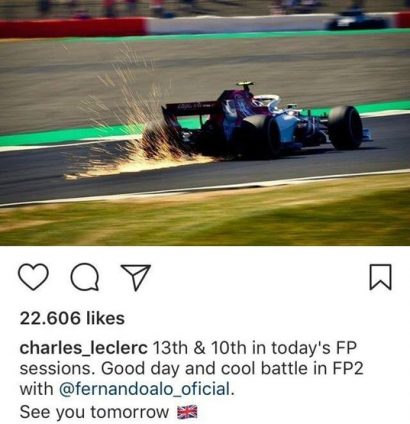 *record screech* But not everyone was playing nice on Instagram, were they, Pierre?

5sec penalty, ridiculous… Every weekends there are contacts with no further action, that’s part of racing & what makes it exciting! Was close battle, I enjoyed it. Just let us race and stop all this bullshit with penalties! Will keep fighting.

Right, where were we? Ah yes, Fernando…

We still saw the other sides to him at Silverstone. There was tongue-firmly-in-cheek Fernando…

“I think today was without a doubt the best qualifying of the year and the best weekend overall,” he said as he qualified, erm, P13.

And we also saw the Fernando that has everyone in the palm of his hand.

Spice up your life

When not driving for Red Bull or Toro Rosso, Max, Daniel, Pierre and Brendon force a Spice Girls tribute act in their spare time. Don’t believe us? Well watch this!

More time needed in the studio, we think. And Brendon is definitely Scary Spice after that horror crash in FP3.

Danny Ric’s reaction spoke for us all…

You may have noticed there was a rather important World Cup game being played on the same day as qualifying for the British Grand Prix. Hard to tell, really.

Mercedes had the game on in the garage. Who needs timing screens and data streams? 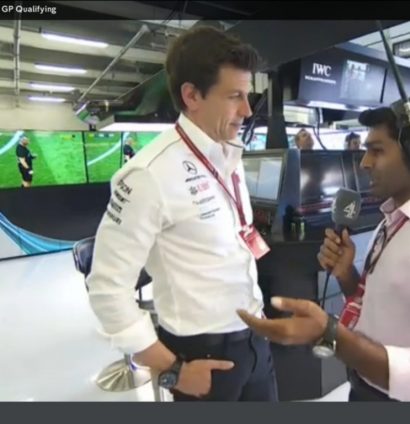 And who needs to debrief? It can wait… 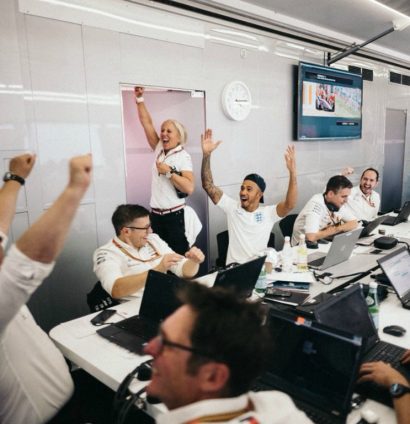 But, ultimately, we got the good and bad side of Mercedes as the World Championship battle reaches boiling point.

So we invited Alex and his dad down for a tour behind the scenes of the factory. And we couldn’t let him leave without a few little treats to make amends! 😊 pic.twitter.com/u4UY9UKRuK

WATCH: Toto on the Hamilton-Raikkonen clash
“To word it in James Allison’s words, ‘do you think it is deliberate or incompetence?’ And that is where I leaves us with a judgement.”
LIVE NOW on Sky Sports F1 & Sky One
📺 Sky Go: https://t.co/fxH1316WnM #SkyF1 #F1 #BritishGP pic.twitter.com/AK84MyKx2F

"I find it a bit unnecessary to even go there"

Lewis, Seb and Kimi give their reactions to that first-lap incident#BritishGP pic.twitter.com/FABsbL3qU5

While the slanging matches will no doubt continue throughout the season, we will just keep looking at the beauty within this image. Two giants of Formula 1 going toe-to-toe. Perfect. 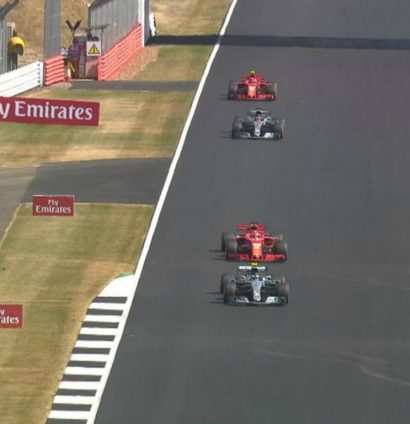 At least it is seemingly water under the bridge…for now.

Alonso brings out the demon in Anthony Davidson, clearly still annoyed that he nicked his WEC seat with Toyota…

British fans were given a helping hand in understanding the various tyre selections available in Formula 1.

Who made this?😂😂😂
Someone have a lot of free time.😀#F1 #WTF1 pic.twitter.com/iy7qufyphH

Both drivers reporting that the other is at fault… We know the truth. It’s Ericsson. #RSspirit #BritishGP https://t.co/6Ey7vI5JdM

And Sergio Perez is under investigation from the FIA after it was revealed he has enhanced the Halo effect in the cockpit. 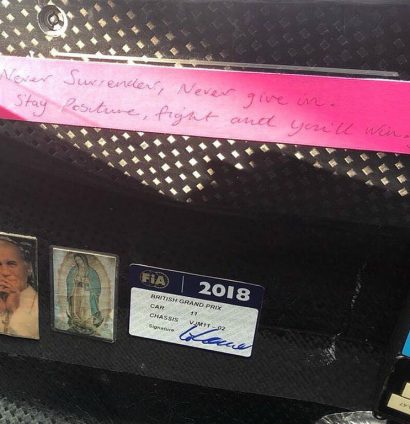 More of a last smile, this week. How to sum up a race weekend in just four seconds.