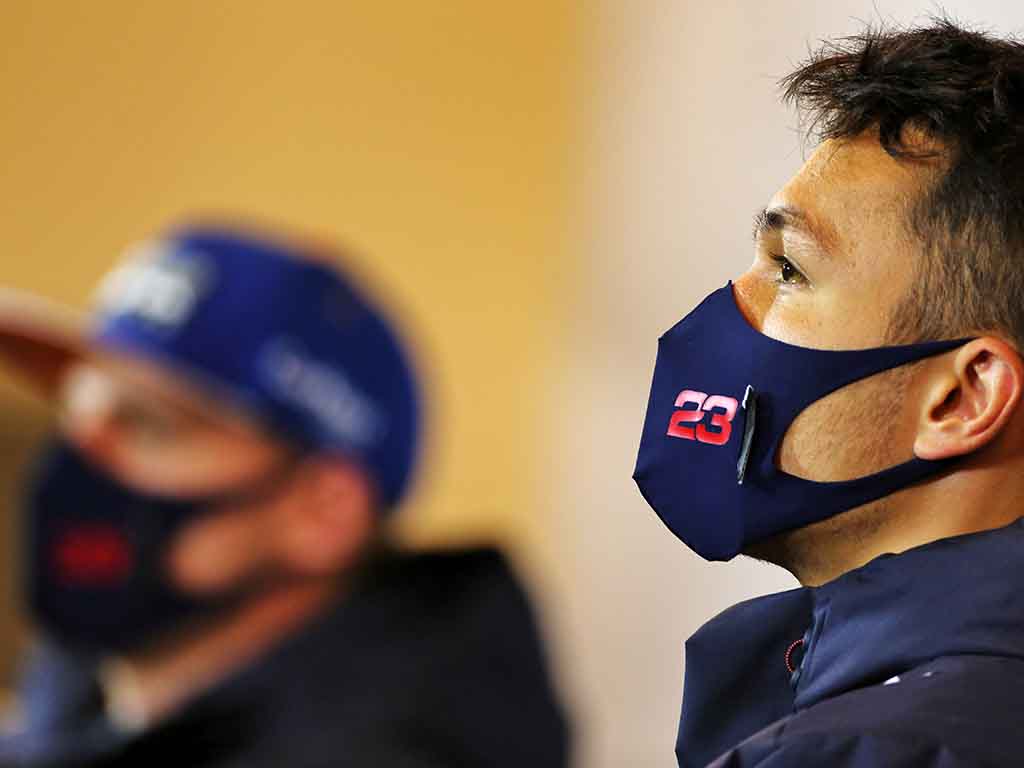 A not-so-warm race welcome to Alex Albon, Nico Rosberg was on fine form once again and an iconic moment shared between Lewis Hamilton and Mick Schumacher.

Time to take a look back over the stand-out images, clips and social media posts from the Eifel Grid Prix weekend.

The race weekend began with an unexpected view into what a two-day event would look like in Formula 1 after rain and fog prevented any track action from taking place on Friday.

But, in amongst all the arty rain puddle shots, there were some nice moments picked up by the TV cameras.

George Russell had some fun at Nicholas Latifi’s expense…but if he is P19, does that make Russell P20? Self-burn…

But the best moment of all was when Mick Schumacher, who sadly missed out on FP1 running with Alfa Romeo headed over to the Ferrari garage to speak with Sebastian Vettel.

Vettel, who idolised Michael Schumacher growing up, would then talk Mick through his race helmet that is in homage to Mick’s father.

Not so genuinely lovely was Lando Norris and Carlos Sainz being told off for streaming on Twitch during a practice session. When there was practically zero chance of heading out, this was pretty petty from Formula 1 and the FIA.

And we will give you one guess what happened soon after FP2 was officially called off. Yep…

I don’t know how to break this to you, but the sun is out at the Nurburgring… #F1 #EifelGP pic.twitter.com/iiAEv69hko

With the Formula 1 roadshow rolling into Germany, that meant one Nico Rosberg was on media duties again for Sky Sports F1 again. Before you all groan, he was actually on pretty good form once again.

The collective panic from David Croft and Ted Kravitz after Rosberg suggested someone (Nico Hulkenberg in this case) jumped the paddock barriers in order to get in had us cackling in delight.

And, as previously reported, his efforts to get Paul di Resta to spill the beans about Pierre Gasly was much appreciated.

But Rosberg did dish out some dirt himself when Carlos Sainz didn’t want to give McLaren some bad PR over their new package.

Carlos Sainz: I won’t tell you what is wrong with our car but we have graining on the tyres.
Nico Rosberg: ok let me tell everyone then, loss of downforce on the front end.
Carlos Sainz: pic.twitter.com/wxJmNtT5Dq

We’re actually looking forward to the next time Rosberg is on our screens. Never thought that would be a sentence we’d actually type out. 2020 is truly a crazy, crazy year.

We’re always reluctant to kick a driver whilst he is down but it is hard to avoid Alex Albon’s miserable weekend at the Nurburgring.

Most telling of all was the radio message which got the response it deserved from Sky commentator Martin Brundle.

Albon: "They race me so hard"

We can’t help but wonder if that comment will come back to haunt him.

At least AlphaTauri tried their best to protect the Red Bull driver by taking a page from Ferrari’s social media playbook.

What we tweeted was a factual description of events. No need to speculate on this. #F1 https://t.co/ZAYNiQvLZJ

Maybe there is just enough time for Albon to do some last minute convincing in the final six races of the season.

Back to the positives and what a performance from Formula 1’s resident super sub Nico Hulkenberg. From having a coffee with a friend on Saturday morning to going from P20 to P8 on Sunday afternoon.

Even his old Renault boss congratulated him, well, sort of.

And, just in case you are wondering how Hulkenberg came back…look no further.

We will, however, be sparing a thought for poor Stoffel Vandoorne, who didn’t get called up by Racing Point and was instead stuck with Call of [no] Duty.

Meanwhile, it was a nice surprise to see Ferlando Alonso on the grid…

Martin Brundle: Do you count all the races you've actually been at and say 'look I was there, I risked my life, I was there anyway'.

We are not afraid to admit that we got a little lump in our throat when Mick Schumacher passed on his father’s race helmet to acknowledge Lewis Hamilton matching the all-time record of 91 race wins.

This really did feel like the changing of the guard.

Lewis Hamilton is gifted one of Michael Schumacher's helmets by Mick Schumacher after equalling the all-time race win record in #F1 pic.twitter.com/rbumDgdhhY

We will leave you with this absolutely fantastic edit that the official Formula 1 account posted to mark the historic moment. Stunning.