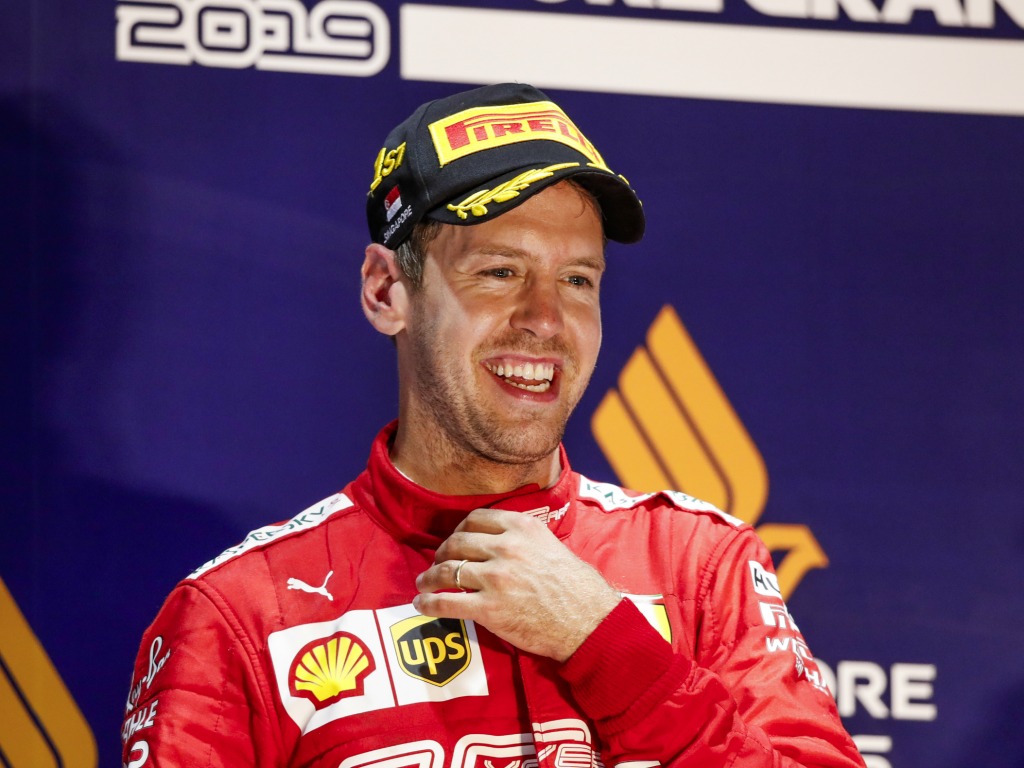 Sebastian Vettel is now back to being the outright king of the Marina Bay circuit with a long-awaited victory. Here are Late Braking’s Singapore Grand Prix driver ratings.

Plus praise for the likes of Lando Norris and Pierre Gasly in the midfield, whilst there is despair over the treatment Valtteri Bottas got on race day.

Sebastian Vettel: Vettel started this weekend off once again trailing behind his teammate and begun Sunday’s action starting two positions back from Charles.

The first stage of the race didn’t look promising for Seb either, falling off the back of the Hamilton and Leclerc duel and almost into the clutches of a hungry Verstappen. But, out of the blue, Vettel is handed a masterstroke of a strategy which allows him to undercut all the competitors around him. It is now on him to capitalise.

Vettel charges through the clean air he has finally been given and makes the most of it, leapfrogging his team-mate and Lewis Hamilton to take the net race lead. The challenges aren’t over yet, with midfield traffic blocking the road and three safety cars to deal with, Vettel displayed a confident, experienced head and a real turn of pace to carve through the late stoppers in front and to get the jump on his team-mate three times in a row. Vettel needed this and he wasn’t giving it back to Leclerc once he had it. 9

Charles Leclerc: Out of nowhere the Ferrari turns up and it is the fastest car round a circuit which notoriously doesn’t suit the Scuderia. Leclerc, the man with talent to throw away of course grabs this with both hands and plants it on pole. Early signs look good for Charles, maintaining a slow pace to conserve tyres while ensuring the gap to Hamilton is just large enough that the Mercedes cannot be a threat.

Pit stop time comes around and through no fault of his own, Charles finds himself behind his teammate. Unable to get past and back into the lead, Leclerc was slower through the traffic and couldn’t get anything done when the Safety Car was brought out three times. An incredible one-two for Ferrari and a historic three wins in a row for the first time in 11 years, but it just wasn’t meant to be Charles’ day. 8

Max Verstappen: Most had thought that Verstappen in that Red Bull would have been the combination likely to challenge the Mercedes up front, but the Bulls ended up the worst of the top 3. Max did well to remain calm and mature and to not lunge into anything silly. Holding off Hamilton to cross the line for a podium is a great result for Max. 8

Lewis Hamilton: Mercedes deployed one of their worst strategic moves this side of Rosberg retiring. Tasking Hamilton and Bottas to recover and overtake both the Red Bull of Verstappen and the two Ferrari cars. What Mercedes failed to remember is that track position is king in Singapore and they sacrificed that for Lewis by keeping him out on those old tyres.

Lewis then did what Lewis does best (with a little help from his team telling Bottas to essentially stop for a coffee on his lap) and minimalise the damage caused. Bringing home fourth still allowed him to extend his lead in the championship and had we been at another circuit or without three safety cars then he possibly would’ve passed Verstappen for a podium. 7

Valtteri Bottas: Beginning the weekend slower than your teammate is never a good thing for a Formula 1 driver, being told to slow down by 3.5 seconds on your lap to “look after the tyres”, when in fact your team just screwed up its lead driver’s strategy and feel bad about it really isn’t great at all.

The worst part is Bottas remaining fully compliant. This must have destroyed Bottas’ confidence and any chance he had of showing he could be a World Champ in the future. It was a tough weekend for Valtteri who just couldn’t get it right this weekend. 6

Alex Albon: Singapore is a tough circuit for any driver to get a move made, but when you’re only in your third race for a team and you have two Mercedes in front of you, then credit where credit is due for hanging on and being competitive. This was a good race for Albon but I feel we still need to see more to ensure that he gets the seat over Gasly, who had a blinder of a weekend by the way. Close up on Verstappen and I feel he could be a solid second driver until fully developed. 7

Lando Norris: After what have been a few difficult races for Lando for reasons mostly out of his control, the young Brit needed to turn up and deliver and boy did he. Best of the rest by a clear mile until the SC was deployed three times and he had the grid on his exhaust with fresher tyres. Holding off the likes of Hulkenberg for that many laps on very old tyres while also staying out of the carnage of the race around him was a fantastic display of skill. 9

Pierre Gasly: Starting in P11 and finishing 8th showed just how good Gasly can be when the pressure is off, and he feels comfortable in the car. Dealing with the advances of the charging leaders well after getting his elbows out and not doing anything stupid to damage the car resulted in a brilliant points finish for the Frenchman. 8

Nico Hulkenberg: After a strong Saturday performance, things were looking positive for Nico but a silly move against Sainz which felt rushed and unneeded caused Sainz to limp back to the pits and for the Hulk to have to pit much earlier than needed, ruining his strategy (and Sainz’s race). Moving on from the crash, Hulk drove well. The recovery drive was strong, carving his way through cars equal to his performance and ensuring he got back into a points paying position. 6

Antonio Giovinazzi: The first Alfa to lead a grand prix since the mid 80’s and looked like pulling an incredible result out of the bag had it not been for contact with Ricciardo only a few laps before a SC that would have seen Gio come out comfortably in the top 8. This has been a good turn of form for Antonio and should see his seat sealed for the next season. 8

Romain Grosjean: There were plenty of drivers who benefitted as a result of the safety cars and many who did not, Grosjean is definitely part of the first group. After being a long way behind the rest of the midfield, Grosjean was brought back into contention, only to narrowly miss out on points. 5

Carlos Sainz: Even with a first lap incident, there always seems to be a way back into the Singapore Grand Prix and Sainz found that to be true after three safety car periods. It wasn’t quite enough to get back into the points but he did at least put on some good moves towards the end of the Grand Prix. 7

Lance Stroll: After making his customary excellent start, Stroll decided to go long on his first stint although not as effectively as Gasly and Giovinazzi. A puncture late on confirmed no points would be heading his way although he get involved in the P11 scrap to end things. 5

Daniel Ricciardo: Many would argue that Ricciardo was the life and soul of the party for much of this race. Whilst the top 6 were travelling around at a snail’s pace, Ricciardo was busting out trademark overtakes.

He did take it too far though as his overzealous move on Giovinazzi caused damage and he lost places towards the end after a potential overtake went wrong. 6

Daniil Kvyat: In what has been a solid return season for the Russian, this was not his finest hour. Whereas drivers around him managed their tyres to last well into the Grand Prix, Kvyat was forced to pit after ruining his medium tyres in just 13.

The race never really recovered from there and he ‘torpedoed’ Kimi Raikkonen for good measure. 4

Robert Kubica: On the week it was confirmed that Kubica would not be racing for Williams in 2020, the Pole delivered arguably one of his best races in the car as he got stuck in there with a few midfield drivers. 6

Kevin Magnussen – Sometimes the finishing position does not tell the entire story and that rings true with Magnussen’s performance at Singapore. In a car that had no right to be anywhere near the top 10, Magnussen was comfortably holding his own before three untimely safety cars.

The fresher tyres on those behind was too much to resist and he fell back from there but it was a good performance up until that point. 7

Kimi Raikkonen: A turn 1 collision brought Raikkonen’s race to an end earlier than anticipated but in truth it had been a tough one even before the incident. Throughout qualifying and the race it was Giovinazzi who had the edge on his team-mate and Raikkonen only hung out in the top 10 briefly. 5

Sergio Perez: It was a better Singapore Grand Prix than last year for Perez although that might not be saying much. Perez pitted early in the race and might well have been flushed out of the top 10 anyway thanks to the strategy but the car decided it for him as he suffered a mechanical failure. 6

George Russell: Unfamiliar territory for Russell as he suffered his first DNF in F1. A first lap incident nearly did the trick but his survival at that point was for nothing as a collision with Grosjean ended proceedings. 5

The Singapore Grand Prix driver ratings are courtesy of the good folks at Late Braking. You can check them out in the following places: