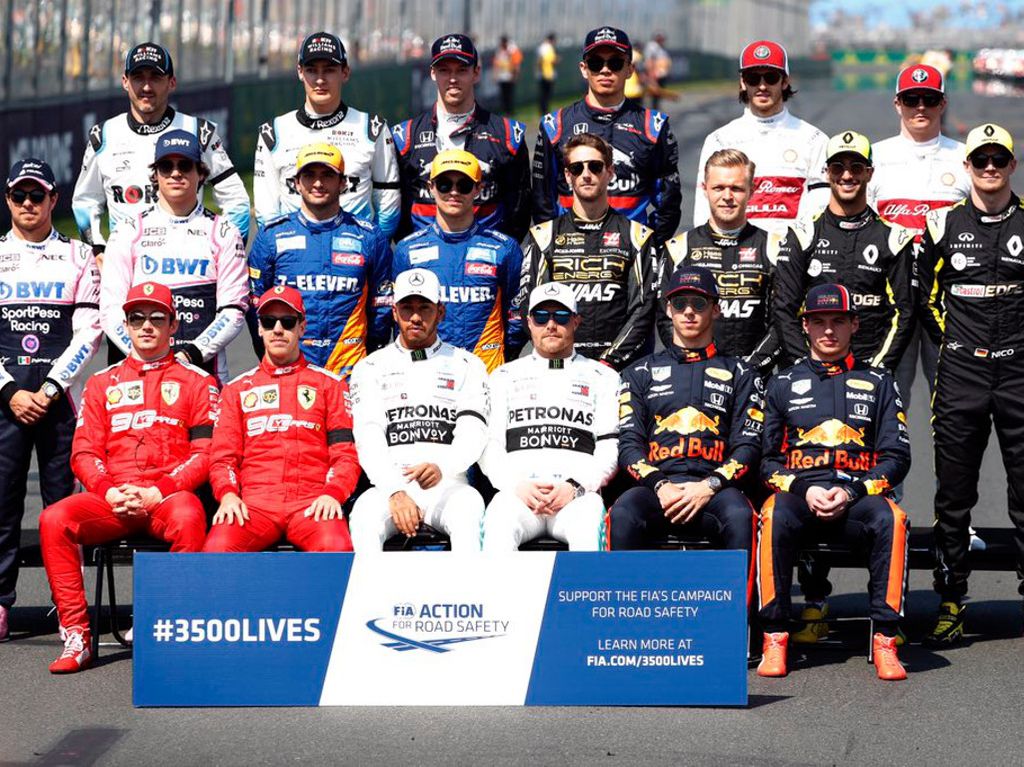 Which teams started the 2019 season in style? Who wanted to leave their opening weekend down under? We bring you the 2019 Australian Grand Prix team ratings.

Valtteri Bottas stormed his way to victory in Melbourne – but it wasn’t all plain-sailing for Mercedes, with Lewis Hamilton suffering floor damage but still managing to hold off the Red Bull of Max Verstappen to secure a 1-2.

The Dutchman netted Honda’s first podium since Silverstone in 2008, and while Red Bull are a team seemingly on the up, it was very much a weekend to forget for the Ferraris.

Mercedes: Bottas jumped his team-mate at the start into Turn 1 and never looked back, stretching his lead lap-by-lap to ultimately finish with a 20-second margin.

It was a dramatic return to form for the Finn who ended 2018 winless, a performance which principal Toto Wolff branded as one that answered critics in the “most dominant way”.

Hamilton didn’t have it quite so easy, with Mercedes discovering floor damage on his car, but he did a fine job to hold off Verstappen, even if the Dutchman’s lawn-mowing experiment at Turn 1 did ease some of the pressure on the defending champion.

Bottas claimed 26 points with the win and fastest lap, Hamilton picked up 18 with a wounded W10 – as the Brit put it: “It was an incredible weekend for the team, we’re leaving Melbourne with maximum points.” 10.

Red Bull: Verstappen led the Bull’s charge, and he ended up doing a pretty good job.

Despite ending qualifying 0.834s shy of Hamilton’s pole time, he was able to split the Ferraris, something few expected him to do.

Come the race, he cleanly – and easily – passed the Scuderia’s prized possession Vettel after catching him but was left to rue an error that cost him a shot at Hamilton later in the race.

My lowdown on the first race and first podium of 2019! 👊 #AusGP pic.twitter.com/BRHeRAE5cS

But, it was with Pierre Gasly where the team really screwed up. After sending him for only one run in qualy 1, he was eliminated and started the race P17, with his Sunday then characterized by an inability to pass their feeder team driver Daniil Kvyat.

Red Bull resisted a cheeky nod down the pit lane to Toro Rosso, and Kvyat ultimately took P10, leaving Gasly out of the points in P11.

However, it was a positive start to life with Honda in general, considering all the skepticism from outside in pre-season, 7.

Branded as the clear leaders going into 2019, all their touted pace abandoned them at the critical moment, leaving both cars off the podium.

It was summed up when Vettel asked on the radio: “why are we so slow”, with the reply being “we don’t know at the moment”.

🎥 WATCH: Leclerc and Vettel make contact in the #AusGP

Formula 1 is always right on the edge…

But the new Ferrari duo almost went over it on Sunday 😱https://t.co/2M8B5E1Dcj

The Scuderia would draw further criticism when they ordered Charles Leclerc to stay behind Vettel with the youngster lining up a move on his more experienced team-mate – it’s only race one.

After the race, team principal Mattia Binotto said: “Right from Friday, we didn’t feel comfortable at this track. Even though we did a lot of work on set-up, we didn’t find the right balance and even our qualifying performance demonstrated that we were struggling to adapt to the Albert Park track.”

At least both cars finished, albeit a minute behind Bottas. 2

Haas: After the pit-stop botches of a year ago, Haas showed up looking to set the record straight.

Starting P6 and P7, the American outfit were firmly leading the midfield pack and looked set to send a fierce message to their rivals.

They pulled away very nicely indeed, and the double-points finish looked on. But soon lightning proved it could strike twice, as Romain Grosjean’s left-front was slow to go on at his stop, before several laps later it would come loose forcing him to retire.

At least Kevin Magnussen had a quieter race – “I’m very happy about today, it was a good result. I’m obviously sad for team not to have both cars get to the finish,” he said after coming home P6.

Moving away from the pit-lane dramas, the team showed solid pace throughout the weekend and look to be early leaders of the “best-of-the-rest” pack – 7.5

Renault: The talk of pre-season was how soon can Renault catch the top three? Well, they couldn’t even see off their midfield rivals in Australia.

Both drivers were eliminated in Q2 on Saturday with Daniel Ricciardo in P12 and Nico Hulkenberg in P11.

The home-town hero Ricciardo would be pushed onto the grass at the race start, with damage suffered from a drain causing his retirement later on.

Hulkenberg therefore was tasked with saving something from the day and he did with P7.

Racing Point: A team that have gone under the radar really throughout pre-season, but so-called “daddy’s boy” showed the teacher how it’s done.

After extending Lance Stroll’s first stint, the new recruit made it into the points to get Racing Point off the mark with a P9 finish.

Sergio Perez had a disappointing afternoon coming home P13. “I’m disappointed to come away from Melbourne missing out on points. It was quite a difficult race for me from lap one because I made a poor start and lost a couple of places before turn one,”  was how he summarised it.

Team principal and CEO Otmar Szafnauer claimed Perez got “stuck in traffic”, but in the tight midfield pack, the new entrant will have to find a way to deal with this. 7

McLaren: Lando Norris looks a real gem early on, but the race gave him a tough Formula 1 lesson.

Few expected Norris to show the pace he did in qualifying, securing P8 on the grid and suggesting that McLaren’s continued chat of their revival isn’t just hot air.

What the hell do I do with the @LandoNorris head now? pic.twitter.com/xhpHchMjpZ

But the race wasn’t quite what the 19-year-old planned.

“The team gave me a good car, with enough pace for me to be in the top 10 but I made a couple of mistakes which cost me any chance of scoring points, so I’m a little disappointed,” he told reporters.

It was his first race in the category, making the huge leap from F2, so he need not worry, and instead focus on all the positives of that first weekend.

As for Carlos Sainz – disaster sums it up. P18 on the grid, before he became the first retiree of 2019 with an MGU-K failure. 6

Alfa Romeo: Like Racing Point, a new name on the grid who made a decent start.

After acquiring the services of 21-time race winner and World Champion Kimi Raikkonen, the world of motorsport quietly expected big things from the team formerly known as Sauber.

Raikkonen didn’t disappoint, and was out of the top 10 only twice throughout all the sessions over the weekend, rounding it off with a P8 finish in the race.

“Our car was pretty strong in the race, but then we got stuck behind cars and there is not much you can do. It seems that it is easier to get closer to the car in front of you but it’s still very hard to overtake,” he told the press.

The 39-year-old even recovered from an unscheduled stop after a visor tear-off got stuck in the brake duct.

His rookie team-mate Antonio Giovinazzi had a solid debut, but his race was heavily compromised by the team’s decision to make him go long in the first stint on tyres that were screaming, to put it mildly.

That being said, he did Raikkonen a huge favour holding up the pack, but as the Finn said, overtaking around Albert Park proved extremely hard. 7

Toro Rosso: Both drivers had something to prove, newly re-introduced to the Red Bull fold, and they did just that.

In particular it was a strong showing for Kvyat, ruining Gasly’s race by keeping the Red Bull man behind throughout the Australian GP and claiming P10 and a valuable point for the team.

It was a strong return to F1 for @kvyatofficial as he finished where he left off: in the points! Catch up on his post race vlog here 👇 pic.twitter.com/5pyFf1m7oh

He even had a good look at snatching P9 from Stroll. “It was an excellent race today! I’m happy with the way I drove and it was really enjoyable,” – great to have you back Daniil.

Albon was able to out-qualify his more experienced team-mate, but couldn’t capitalise in the race, coming home P14.

That’s not to say he was poor, in fact he can be very proud of his first race, and the team can take encouragement overall from their first outing. 7

Bit of a lonely one that – but there are worse ways to spend a Sunday!

“I am not interested in fighting Robert for last, we need to work together to make this right,” said George Russell.

He may have no choice. 1