Home F1 Features The good, the bad and the ugly: Alain Prost 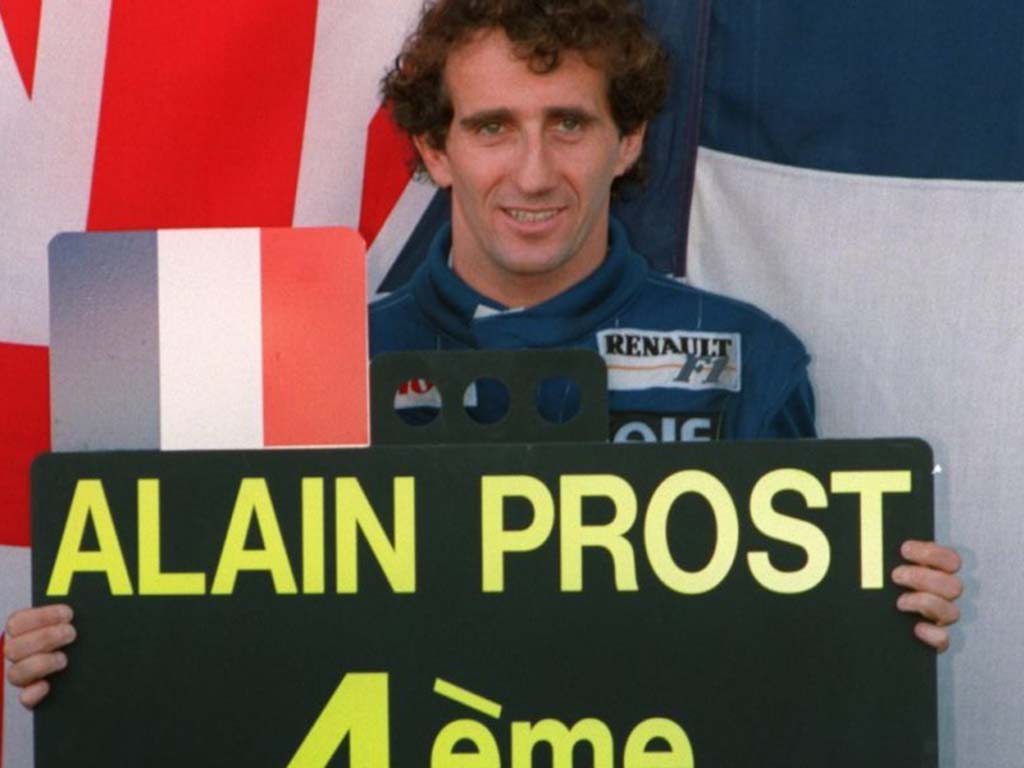 Four World Championships to his name and yet somehow Alain Prost is all too often remembered for his rivalry with Ayrton Senna rather than his success on the track.

In his 13 seasons in Formula 1, ‘The Professor’ won four Drivers’ Championship titles, only one of five men to have achieved that feat, and is one of only two to have quit the sport and returned to win a World title.

Yet his near-obsessive single-minded focus ostracised, rather than encouraged worship, as he adopted an economising approach to his racing.

He was a man of principle, walking away from a biblically sodden 1989 Australian Grand Prix on safety grounds, risking his chance of claiming the Drivers’ title by sitting in the pits.

“I simply thought the conditions were too dangerous. You’ve only got one life.”

And yet, for many, the Frenchman was the sinner to Senna’s sainthood.

At a time when Senna was bringing the passion, enthralling the fans, Prost made racing look all too easy – and so unspectacular.

Having made his debut with McLaren in 1980, Prost swapped over to French team Equipe Renault Elf for the 1981 season.

Prost retired from six of the first seven grands prix before Formula 1 arrived at the little Dijon-Prenois circuit for the Frenchman’s home race.

A Frenchman driving a French car for a French team, the pressure was on especially as he had retired from his home debut a year prior.

On a weekend where the drivers had to deal with changing weather conditions, Renault, for a change, had few problems and were amongst the fastest down the main straight.

Prost qualified third for the race, tied on time with John Watson, but under F1 rules the first driver to set the lap time jumps ahead.

Grey clouds and chilly conditions greeted the drivers as Prost’s team-mate René Arnoux lined up on pole position ahead of Watson, Prost and Nelson Piquet. Renault was cautiously optimistic.

An issue with the starter’s electronics befuddled Arnoux with Piquet quick to capitalise, taking the lead ahead of Watson and Prost. While Piquet built up a lead, Prost made short work of Watson and set about hunting down the Brabham driver.

However, disaster struck Prost midway through the race when his Renault refused to select fourth gear. Piquet, though, also had problems making it tough to overtake backmarkers and Prost closed up on him only for Mother Nature to get involved.

A deluge hit the track on lap 54 and three laps later it was a river out there and the race was red-flagged at the end of the 59th lap. That was two laps too short to declare the result.

With the cars in the pits, Renault fixed Prost’s gearbox and, when the race resumed, the Frenchman used his soft ‘sprint’ Michelin tyres to jump Piquet for the lead.

The 22 laps, billed as a rather pointless formality given Michelin’s superiority, allowed Prost to hold a slim advantage over Watson, taking the chequered flag by 2.29s.

It was the first of Prost’s eventual 51 grands prix wins and heralded the arrival of the France’s best ever.

Still with Renault in 1983, Prost lost the World title to Nelson Piquet by a mere two points.

His RE40 suffered a turbo failure on lap 35, putting him out of the grand prix and costing him the lead as Piquet strolled to third place and the World title.

Prost left Renault at the end of the year, signing with McLaren where he teamed up with double World Champion Niki Lauda.

Throughout the year the McLaren MP4/2 was either winning races or retiring from them with Prost taking seven wins to Lauda’s five. He also recorded five DNFs to the Austrian’s six.

They went into the final race with Prost three-and-a-half points behind Lauda and, although the Frenchman won the season finale in Portugal, a P2 for Lauda meant he claimed a third Drivers’ Championship title.

And he did so by half a point.

So where did it go wrong for Prost? Surprisingly the answer to that is: At one of the grands prix he won, Monaco.

With heavy rain falling at an already dangerous circuit, the start of the 1984 Monaco Grand Prix got underway 45 minutes late with Prost lining up on pole position ahead of Nigel Mansell and René Arnoux.

Prost led off the line while the Ferrari of Arnoux collided with the Renault of Derek Warwick, sending the Brit into the fence on the outside of St. Devote. He was collected by his team-mate Patrick Tambay with both drivers suffering leg injuries.

Prost lost the lead to Mansell when his TAG engine began to misfire and he got caught up in traffic. He was back in the lead six laps later when Mansell crashed. Lauda did too, out of the race on lap 23 when he spun at Casino Square.

While this was all going on, Ayrton Senna, who started P13 in the Toleman-Hart, was closing fast.

Prost waved to the stewards on lap 29 to indicate that he felt the conditions were too dangerous and the race should be stopped. The stewards didn’t red flag it.

Prost gestured to the stewards again on lap 31 but the lap continued with Senna overtaking the slowing Prost before the end of lap 32.

The red flag was promptly shown at the end of lap 32 after clerk of the course Jacky Ickx made the call.

Under F1 rules the result was counted back one lap, end of lap 31, putting Prost ahead of Senna.

With the rain continuing, Ickx opted not to restart the race and Prost was declared the winner but only scored half points as the race had not reached the 75 percent distance.

Instead of nine points, he scored 4.5.

It was a controversial call to stop the race as Prost’s TAG engine was a Porsche design and Ickx, who made the decision, drove for the factory run Rothmans-Porsche team in sports car racing.

Prost had won his first of four Monaco Grands Prix but, as a result, lost the World title to Lauda. If the race had continued to its 75% and, even if that would have meant he was second to Senna, the six points would have changed the outcome of the championship.

Beaten by the Williams-Hondas in 1987, Prost wanted Honda power for his McLaren car and realised that Honda could be enticed to swap if it meant powering Ayrton Senna.

The Frenchman persuaded McLaren to sign the Brazilian and so began a rivalry that would become the stuff of legends.

McLaren dominated the 1988 championship, taking 15 wins in just 16 races. Prost outscored Senna by 11 points but that year’s points system, where only a driver’s 11 best results counted, meant Senna took the title – his first – by 90 points to 87.

The battle was on.

Heading into the 1989 season Senna won three of the opening four races before Prost won three of the next four. But while Senna would add a further three wins as the season progressed, Prost only bagged one more.

He was, however, the more consistent of the two and went into the penultimate race of the season – the Japanese GP – leading the championship. Senna needed to win the final two races to stand any chance of beating Prost.

Senna lined up first to Prost’s P2 on the grid but, unbeknown to the Brazilian, the Frenchman had his gurney flap removed before the race to aid his straight-line speed.

He got the jump on his team-mate at the start and set about building up a lead only for Senna to negate that by lap 40. It was a deliberate move from Prost as it put Senna in a slipstream in dirty air and meant the reigning World Champion was fast using up his tyres.

Six laps into tailing his team-mate and Senna made his move. He used the tow from the Frenchman’s McLaren to close within two car lengths through R130 and pulled up alongside Prost in the braking zone for the chicane.

Prost closed the door and the two collided just before the apex of the turn for the chicane. Wheels locked, engines stalled, both cars ground to a halt and seemed to be out of the race.

Senna, however, urged the marshals to give him a push, fired up his engine and drove down the escape road to rejoin the race. He pitted for repairs, his MP4/5 requiring a new nose, and resumed racing in second place. That soon became first and a win for the Brazilian.

Immediately after the race, though, he was disqualified by the stewards for missing the chicane following his collision with Prost, who was therefore crowned the 1989 World Champion.

“It was clear that political and economic pressure groups manipulated behind the scenes to make Prost World Champion,” Senna told the media.

Prost hit back by accusing Senna of “dangerous driving” and even claimed he had been favoured by McLaren and Honda.

Such was the fallout that it was impossible for the two to remain team-mates and Prost joined Ferrari for the 1990 season. That did nothing to take the sting out of the rivalry.

The two once again traded blows, this time Prost in the Ferrari and Senna in the McLaren, and they again went into the Japanese GP locked in a battle for the World title.

Just as the year prior, Senna took pole but this time he wasn’t happy with the position of P1 on the grid and asked the stewards for it to be moved to the cleaner side of the track. They said yes only for Balestre to block the move.

Senna was livid and vowed to challenge Prost into the first corner if the Frenchman put his Ferrari ahead, and to hell with the consequences.

Prost did make the better start with Senna responding with a move up the inside of the first corner that was never, not in anyone’s book, going to work.

Both drivers retired from the race on the spot.

Prost slammed Senna as “disgusting… and a man without value”. He was, however, a man with two World titles as the Japanese GP crash meant Prost could not catch him in the standings.

The two remained at Ferrari and McLaren respectively in 1991 but Ferrari were unable to deliver a car capable of challenging the MP4/6. Senna won the title with Prost a disappointing fifth in the championship.

The Frenchman decided enough was enough and quit the sport at the end of that season only to return with Williams in 1993.

He added a fourth World title to his list and you only get one guess who he beat. Yes, it was Senna. 99 points to 73 and this time without any shenanigans at the Japanese GP.