Home F1 Features The good, the bad and the ugly: Mika Hakkinen 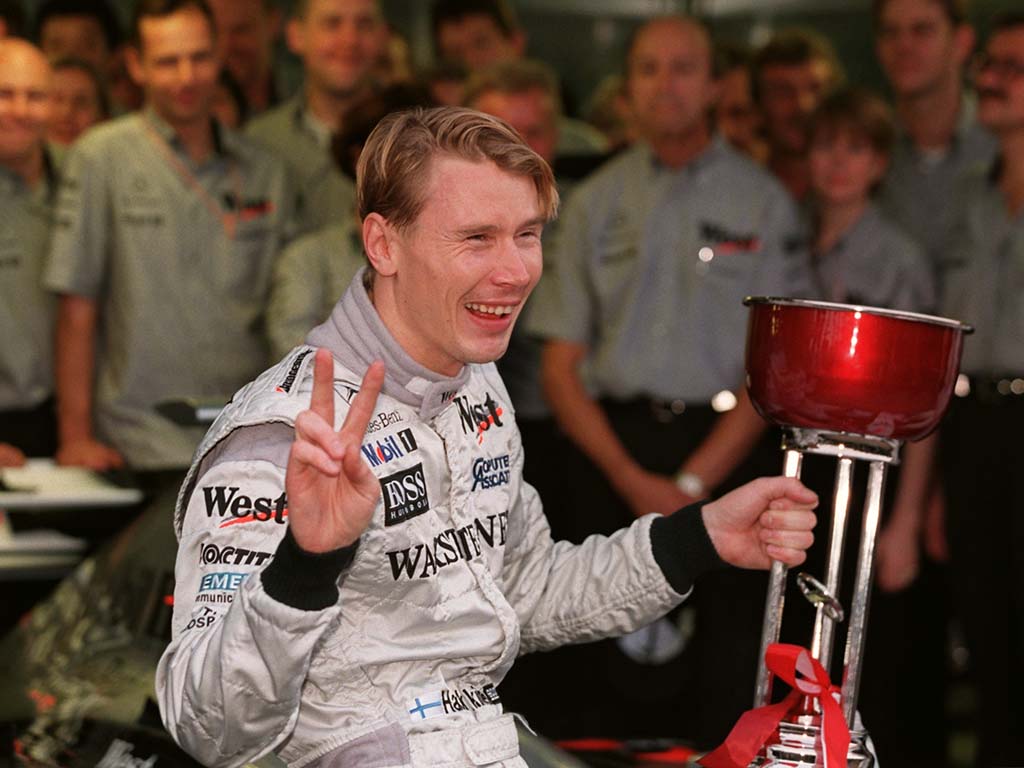 All aboard for a trip down memory lane with the ‘flying Finn’ himself: Mika Hakkinen.

Before the dominant reign of Michael Schumacher and Ferrari took firm hold in the early 2000s, a quiet, reticent figure from Vantaa, Finland provided the final stand by denying the Scuderia not one, but two World Championship titles at the final races of the respective 1998 and 1999 seasons.

A huge weight was lifted from Mika’s mind when, at the 99th time of asking, he claimed his maiden Formula 1 win when team-mate David Coulthard moved aside at the season-ending European Grand Prix in 1997. That day would provide the springboard for a full McLaren resurgence over the next couple of years and the prologue for an epic Hakkinen v Schumacher duel the following year.

A sizeable decrease in car width and the change to harder, grooved tyres meant there was some rather radical regulations to get to grips with ahead of the 1998 campaign. Yet, despite the overhaul, McLaren built some rock-solid foundations for title success with five wins in the first six races, Hakkinen winning four of them.

But, a mid-season mix of reliability issues, stirred in with some controversial victories for Schumacher at Montreal and Silverstone, and sprinkled with an element of good fortune for Ferrari in France when they capitalised on a race restart after Hakkinen had initially made the perfect getaway, formed the ingredients for a titanic title tussle.

Just when it looked like McLaren’s grasp was weakening, they responded with back-to-back 1-2 finishes in Austria and Germany in the space of a week, but Schumacher and Ferrari were not down and out just yet.

Ross Brawn’s switch to a three-stop strategy in Hungary for Schumacher proved to be an absolute masterstroke and the rewards tasted even sweeter given McLaren’s own tactical shortcomings and a sudden handling problem for Hakkinen saw him limp home to a P6 finish.

Then it was on to Belgium and one of the all-time classic races that began with a start more reminiscent of a destruction derby rather than a Formula 1 event. After the huge mess created by a 13 car pile-up was swept up, the drama continued soon after the race restart when contact between the two title protagonists pitched Hakkinen into a spin and effectively turned him into a sitting duck for Johnny Herbert to smash into.

With Hakkinen out of the race, it was time for Schumacher to inflict maximum damage and he was all set to do so with a mighty 37-second lead. Then, on lap 25 with visibility still very poor due to the wet conditions, he collided with Coulthard when trying to lap the other McLaren driver. The unnerving glare on Schumacher’s face as he went to confront DC is still as crystal clear in our minds now as it was back then.

While that crazy day ended with Damon Hill delivering Jordan’s first-ever Formula 1 win, the title twists continued at the next race at Monza with Schumacher heading a dream Ferrari 1-2 in the Scuderia’s own backyard as reliability issues threatened to derail McLaren’s season once again. Coulthard’s engine went pop after establishing a dominant lead; Hakkinen overcame more handling issues, only for his brakes to start failing and struggle to a P4 finish.

With two races left to go, there was no separating Hakkinen and Schumacher. 80 points apiece.

At the penultimate race in Luxembourg, Hakkinen’s eyes were filled with red as he lined up behind a Ferrari front-row lockout. Yet his unmistakable bravery as he made a crucial pass on Eddie Irvine on lap 14 made way for his unmistakable speed as he hunted down Schumacher during his first long stop strategy. The title was almost in sight.

A handshake between the two title rivals ahead of the 1998 season finale at the Japanese Grand Prix. #F1 pic.twitter.com/zc9Ax56YMO

A pole position for Schumacher in the season finale at Suzuka blurred Hakkinen’s title vision once again, but it soon became clear when Schumacher stalled on the grid and his incredible recovery drive from last came to an abrupt end when a puncture on lap 31 ended all title hope.

And so there Mika stood. A Formula 1 World Champion and McLaren’s first since Ayrton Senna. He was incredibly lucky to be standing there at all.

On November 11, 1995 in Adelaide, Hakkinen almost lost his life. During the qualifying session for the season-ending Australian Grand Prix, the Finn, who had only just recently returned to action after requiring surgery for appendicitis, suffered a sudden rear tyre puncture and went soaring into the tyre wall at speeds in the region of 180 to 200km/h.

The force with which Hakkinen hit the wall was so severe, his steering wheel, which was broken in half, punched holes in his helmet and his head was subsequently slammed back on to the edge of the cockpit.

Marshals found Hakkinen unresponsive and the two trackside doctors, intensive care specialist Jerome Cockings and neurologist Stephen Lewis, made a split-second decision to perform an immediate tracheotomy to clear the Finn’s airways. He regained consciousness and was stretchered away from the crash site.

If the doctors had not already been positioned at the corner of the crash and the hospital was not so close to the track, this incident could have easily had a different, tragic outcome.

Yet, as the Finn battled through an incredibly painful recuperation period, he emerged with more determination and grit than ever before. Remarkably, he was back in the car for pre-season testing ahead of the 1996 season.

“There I was in the South of France, Monday, February 5th, 87 days after the accident, everyone was friendly when I arrived, but I saw how the mechanics were looking at me,” Hakkinen recalled.

“I tried to behave as normal as possible but I saw from their faces that they thought, ‘That guy is going home again.’

“I thought, I will show all these people that I have come back to win, when I got back in the car for the first time, I felt like I was home. This was my office, this is my thing, this is who I am, this is Mika Hakkinen.

“I drove out of the pits and drove 63 laps during that day, my time was half a second faster than that of Michael Schumacher’s Ferrari the day before.”

Hakkinen would go on to compete and complete the entire 1996 season, finishing P4 in the World Championship and helping to show the signs that McLaren were on their way back up to the F1 summit.

But before the World Championship successes and before the near fatal crash, Hakkinen was at the epicentre of an ugly contract war.

After two full seasons under his belt at Team Lotus, Hakkinen was forced to watch on from the sidelines for much of the 1993 campaign, only able to get himself in the other side of the McLaren garage alongside Ayrton Senna for the final three races of the season.

There was a case of itchy feet for Hakkinen at Lotus, who were ready to put all their eggs into Johnny Herbert’s basket. The Finn and his manager, 1982 World Champion Keke Rosberg, thought the time was right to move in order to progress with his Formula 1 career.

The rumour mill subsequently fired up and the possible destination that kept cropping up was Williams. Lotus chief Peter Collins, though, was not going to let Hakkinen go easily.

Collins tried to put off any potential suitor from signing Hakkinen by pointing the driver’s weaknesses to other teams, which he later insisted was all just a crafty negotiating tactic rather than making criticisms he truly believed in. There was also a claim that Hakkinen had already agreed to sign a new contract with Lotus for the 1993 season, but it turned out there was nothing actually set in stone.

Just when it looked liked Williams had won the tug-of-war match, Collins was presented with one last card to put up his sleeve.

Williams were late in registering their entry for the 1993 campaign and required unanimous support from all the other teams to be able to join. Lotus would only give their consent if they stopped their pursuit of Hakkinen. Williams, with now effectively both arms tied back their backs, cancelled Hakkinen’s planned contract.

Hakkinen was still all set to leave, but there was still one final twist before he would eventually land at McLaren. French outfit Ligier were ready to come to Hakkinen’s rescue…that move also fell through when the team attempted some last-minute tweaking of the Finn’s contract when a prior agreement was already in place.

By December of 1992, Hakkinen was still without a team – until Rosberg approached Ron Dennis. The McLaren boss was filled in on all the trials and tribulations and, with the team in a tricky spot themselves as Senna had not yet committed his future to McLaren, needed someone who was potentially capable of filling those big boots.

An agreement was made and, after one final battle with Lotus (this time in the courts), Hakkinen was finally free to join his new team.

However, Senna had eventually decided to stay with McLaren and the team had already agreed to taking on Michael Andretti as his partner for 1993. Three drivers in two cars just doesn’t go.

That meant reserve driver duties for Hakkinen and those duties remained for 13 of the 16 rounds of the season.

In case you were unsure whether Hakkinen was ready to prove himself when the opportunity to race finally came his way in Portugal, the fact he was able to immediately out-qualify Senna tells you everything you need to know.

There was criticism aimed at Hakkinen and Rosberg for joining forces with McLaren, but their decision was all part of the long-term plan.

Rosberg said: “Mika and I have all the time known what we were doing. I really don’t think we have made a mistake and you’ll see that too. I believe that Mika will be seen on the podium in this season.”

The next round in Japan, Hakkinen finished third.

Rosberg continued: “Mika’s goal is to be World Champion. Now he is in the team in which he can achieve it. Mika will go on at a step at a time: first one is to win one GP and after that to win a World Championship.”

Worked out pretty well in the end, huh?