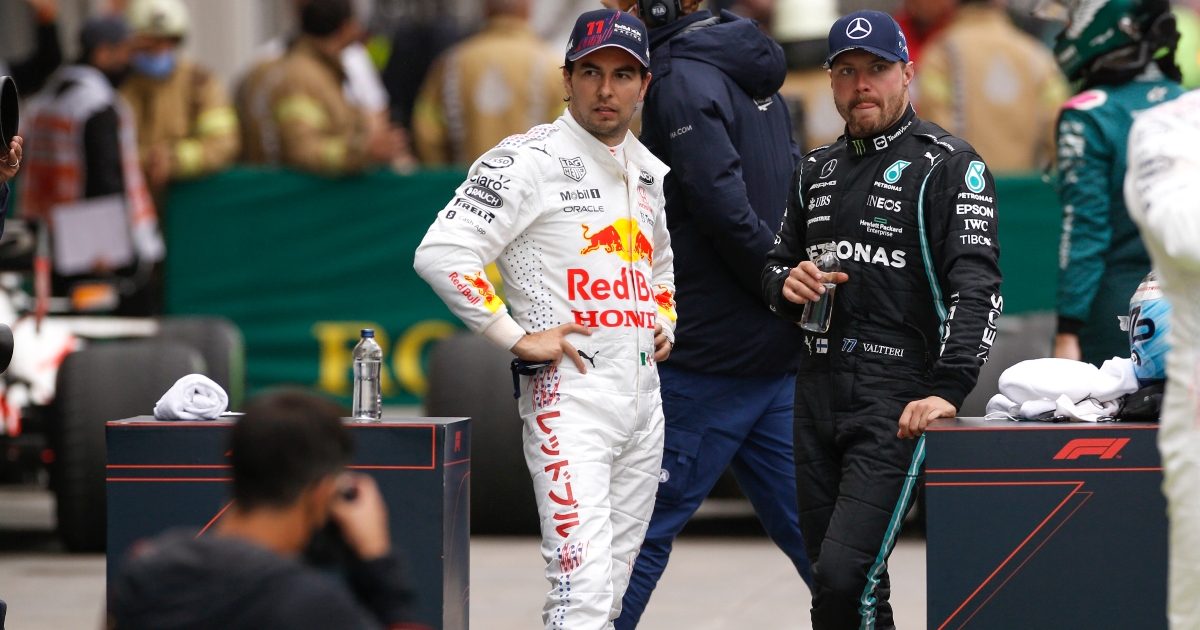 Valtteri Bottas and Sergio Perez will have a huge impact on the title fights, which begs the question: Who is the better supporting act?

Neither driver has had the best of seasons, shown by the fact that they’re a long way behind Lewis Hamilton and Max Verstappen and out of the fight for the Drivers’ Championship themselves.

They still have a big role to play in that battle, though, and the one for the Constructors’ Championship as support for their team-mates, but who will play such a role better?

Let’s break it down…

VALTTERI BOTTAS IS ON POLE❗️

With McLaren and Ferrari looking strong and overtaking difficult at many of the remaining circuits, it’ll be crucial that Bottas and Perez qualify ahead of the midfield if they want to help their team-mates. In this department, there’s a clear winner.

While he may be up against arguably the best qualifier on the grid in Verstappen, Perez’s Saturday showings have still been disappointing this year. He has only beaten the Dutchman once and has only qualified inside the top four on five occasions, with his average result being P7. For someone in maybe the fastest car on the grid, that’s really not good.

Bottas on the other hand has only failed to qualify inside the top three at five rounds, has started on the front row five times and has beaten Hamilton four times. He has also been a lot closer to the Brit than Perez has to Verstappen when he’s lost out and has out-qualified the Mexican at 12 of the 16 race weekends.

There’s little to choose between the two drivers in many ways, but not when it comes to qualifying. On Saturdays, Bottas has the clear edge.

While there may be a bit of a gulf in class between them in qualifying, things aren’t so clear cut on race days.

Perez has produced a number of strong recovery drives, making various excellent overtakes, is as good as ever when it comes to preserving his tyres and, in terms of outright race pace, often hasn’t been far off Hamilton and Verstappen. Things haven’t been perfect though, with the Mexican making costly errors at Imola, the Red Bull Ring and Spa.

Bottas meanwhile has delivered masterclasses at Monza and Istanbul Park, going from the back to P3 at the former and cruising to victory at the latter, but has also been one of the worst performers on the grid at Imola, Baku and Sochi, with most of his other Sundays being solid if unspectacular.

Results alone would suggest that the Finn should have this category wrapped up too, but his higher finishes have often been a result of his higher starting positions. In terms of performances alone on Sundays, there’s really nothing to choose between him and Perez; both have had a few stunners and a few shockers.

Hamilton and Perez served up a treat with this mini battle 🍿#TurkishGP 🇹🇷 #F1 pic.twitter.com/jOTcurRWue

At both Baku and Istanbul Park, the Red Bull man was tasked with holding off a charging Hamilton to aid his team-mate and did so perfectly on both occasions, keeping the Mercedes behind him, while he also didn’t let Bottas through in Italy before losing the spot due to a time penalty.

Bottas’s defending on the other hand has often been meagre, to say the least. The most obvious example of that came in Russia when he effectively waved Verstappen through, while the Dutchman and Perez had little trouble getting past him in the Netherlands and France respectively.

If you had to get past a driver to win the World Championship, you know which one of these two you’d rather find myself behind, and it’s not a particularly difficult choice.

Both Bottas and Perez have at times been in good enough form to fight at the very front of the field, but neither has been able to do consistently.

At Baku, Paul Ricard and Istanbul Park, Checo has been the exact sort of second driver that Red Bull have so desperately needed since Daniel Ricciardo left, but he has also often not been much better than the man he replaced, Alex Albon, due to his struggles to get to grips with his car.

Given he has been with Mercedes since 2017, Bottas has been more comfortable with his machinery from the off and his performance levels have fluctuated less as a result, even if they have been far from steady.

At a number of weekends this year, Perez has been a 3/10 on Saturday and an 8/10 on Sunday, while Bottas has just been a solid 6 or 7 throughout. In terms of consistency, he has the edge, but there’s room for improvement for both of them.

They have 78 podiums between them, but the 2021 Turkish Grand Prix was the first time Valtteri Bottas and Sergio Perez stood on one together.

Will they do so again before the end of the year? #f1 pic.twitter.com/kuVVFEfIRH

Which of the two is the better supporting act to their team-mate isn’t easy to decide, but all things considered, Bottas just about prevails.

He’s been the much better qualifier, is generally as good as Perez on race day and is consistently performing at a decent level more than the Mexican.

Checo though is the superior driver when it comes to wheel-to-wheel racing and, with that and his strong race pace, would probably offer more help to his team-mate than Bottas would if he could just sort out his qualifying performances.

It’s doubtful that will happen before the end of the year though so unless Bottas decides to stop playing the team game – which also seems unlikely despite the fact that he’s leaving – Mercedes and Hamilton have the slight advantage when it comes to the number two driver.