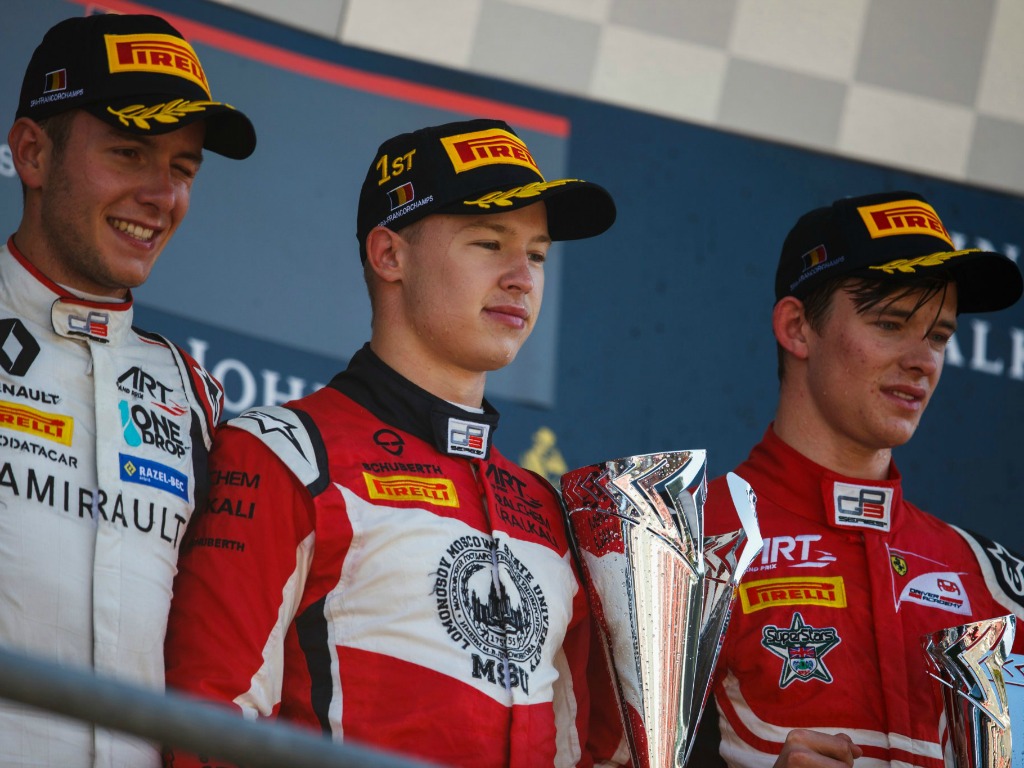 The ART Grand Prix team continue to dominate the GP3 series, with three of their four drivers leading the Championship after Belgium.

It is Anthoine Hubert that leads the way from his team-mates, and he scored more points than both Callum Ilott and Nikita Mazepin at Spa to extend his lead in the race for the title.

Before the Belgian Grand Prix weekend, it was announced that Dorian Boccolacci had been promoted to the F2 Championship by the MP Motorsport team. That gave an opportunity to Richard Verschoor to drive for the team in the Ardennes Forest.

“It’s great that I’m able to take another step up the motorsport ladder,” Verschoor said before the weekend.

“The GP3 Series is a highly competitive series that showcases itself on Grand Prix weekends in front of Formula 1 teams.

“The fact that I’m going to drive for MP again feels like coming home.”

David Beckmann, in just his second race weekend with the Trident team, led the field after the practice session early on Friday morning. The German posted a time of 2:06.111, to be fastest by a tenth of a second.

It ended up being a Trident 1-2-3-4 in practice, as Pedro Piquet, Giuliano Alesi and Ryan Tveter rounded out the top four.

The four ART cars and two Jenzer Motorsport cars took the last of the positions in the top ten, with Championship leader Anthoine Hubert nearly a second off the pace.

At the wrong end of the field, Julien Falchero could only manage to do two laps in his Arden International car, suffering problems during the session.

The four ART cars pushed themselves further forward in qualifying, with all four in the top six. However, no-one could beat David Beckmann, as once again the German posted the fastest time of the session.

Just a second separated the top sixteen drivers, but Beckmann had one and a half tenths in his pocket over Hubert. Pedro Piquet and Jake Hughes put their cars on the second row, with Nikita Mazepin and Callum Ilott locking out the third row for ART.

On another day, Niko Kari would have been happy to be just a second off pole, but in this tightly contested qualifying session at Spa-Francorchamps, the Finn could only manage P16.

Richard Verschoor, who was making his debut in the series, was disqualified after the session. The Dutchman failed to stop at the weybridge after his timed run, and therefore he was removed from the timings. He had qualified in P15, but would have to start from the pit lane for the feature race.

David Beckmann got off to the perfect start after his maiden pole position, and had a lead of over two seconds by the end of the first lap. Ryan Tveter had managed to go from P8 all the way up to P2 on the opening lap, before Nikita Mazepin and Callum Ilott went into each other at Les Combes, dropping down out of the points.

It then became a game of cat and mouse between Beckmann and Tveter up front, with the pair trading blow for blow when it came to fastest laps. However, the German was able to hold his own and go through to win the race, his first victory in GP3.

So it was a 1-2 for Trident, as all twenty cars finished the opening race of the weekend. Anthoine Hubert improved his Championship standings as he took the final step on the podium, with his ART team-mates of Mazepin, Ilott and Hughes in P5, P6 and P7. Joey Mawson, Giuliano Alesi and Tatiana Calderon rounded out the points paying positions.

There was a slight delay early on Sunday morning before the sprint race, as the mist descended on Spa-Francorchamps.

We recommend you bring a coat. pic.twitter.com/jm3qxsQSBN

The race would only start with 19 cars, as the feature race winner, David Beckmann, brought his Trident into the pit lane at the end of the formation lap.

Joey Mawson led the field away form the reverse grid pole position, and would keep hold of it down into Les Combes, forcing Callum Ilott off the track. The Brit came back on in P4, dropping down a couple of places.

However, Mawson would soon drop out of the lead, as both Jake Hughes and Nikita Mazepin got past him on the next lap. Both Ilott and Hubert then got past Mawson as well to make it a 1-2-3-4 for ART.

Joey Mawson would eventually go on to retire from the race, but would be classified in P17. Diego Menchaca was handed a time penalty for forcing Simo Laaksonen off the road further down the field, while both Ilott and Hubert got past Jake Hughes to get on to the podium.

It finished 1-2-3-4 for ART, with Nikita Mazepin taking his third win of the season, more than any other driver in 2018. Richard Verschoor came through the field to finish in P7 and earn his first points in GP3.

So ART continue to lead the way, with Anthoine Hubert now 26 points clear of his nearest rival. Those rivals are also team-mates, as Callum Ilott and Nikita Mazepin are the only two drivers within fifty points of the Frenchman with three race weekends to go. Leonardo Pulcini has the lead of the non-ART drivers, despite not scoring in Belgium. He is closely followed by Pedro Piquet and Giuliano Alesi.

Unsurprisingly, ART have a big lead in the Constructors’ Championship. Their 464 points is an almost unassailable total, even with three weekends left. Trident have wrapped up P2 in the standings, with Campos and MP Motorsport battling it out for third.

There is a quick turnaround before the next weekend, with the Italian Grand Prix at Monza coming straight away. ART could clinch the Constructors’ title at Monza, and you wouldn’t bet against it happening in the first race of the weekend, either. But who will grab the momentum going into the final few races of the season?

Does Anthoine Hubert have what it takes to keep hold of that lead, or could his fellow ART drivers chase him down? Can Leonardo Pulcini grab his first win of the year at Monza, and take victory on home soil? We will find out the answers in just a few days’ time.