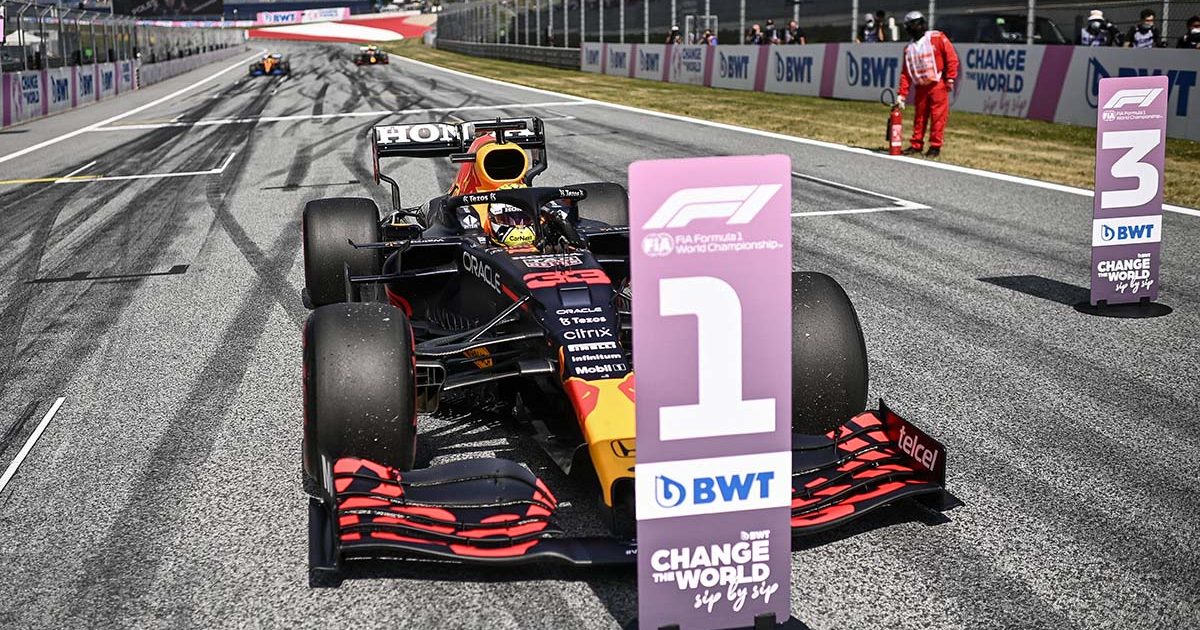 Max Verstappen took pole position for the Austrian Grand Prix, less than half a tenth ahead of Lando Norris – who earned his first ever front-row start in Formula 1.

Sergio Perez beat Lewis Hamilton and Valtteri Bottas to P3, as the Mercedes pair lagged behind Red Bull on the day. Both AlphaTauri drivers will line up P6 and P7, with an impressive performance from both Pierre Gasly and Yuki Tsunoda.

Outside the top 10, Fernando Alonso fumed after being blocked in his final flying lap by Sebastian Vettel – with the stewards set to investigate the incident. There was another Q2 exit for Daniel Ricciardo, Esteban Ocon was knocked out again in Q1 and, in positive news for Williams, George Russell got his car into Q3 for the Austrian Grand Prix, out-qualifying Lance Stroll to take P9.

Think Verstappen can make it back-to-back wins at the Red Bull Ring? Head to Planet Sport Bet for all the latest prices on the Austrian Grand Prix.

There was a party atmosphere in the Styrian sun as qualifying got underway, as thousands of the Orange Army were out in force to support Verstappen, with fans allowed back in the Red Bull Ring this weekend.

The Dutchman was not messing around either. After going five tenths faster than anyone else in FP3, he went straight out on a set of soft tyres to set a 1:04.249, 0.257s quicker than Hamilton behind as the teams set out their stalls early in their first runs in Q1.

Second time around, Lando Norris and Alonso made people take notice as they put themselves in the top three on the timesheets behind Verstappen – ahead of both Mercedes cars.

Alonso went near enough a second faster than team-mate Ocon, while Norris was over six tenths ahead of McLaren stable-mate Daniel Ricciardo.

Just as in the Styrian Grand Prix, margins were extremely fine between the teams around the short lap of the Red Bull Ring, with all bar the top five drivers having to take an extra run at the end of the session.

After failing to get out of Q1 last weekend, history repeated itself as Ocon dropped out of qualifying at the first hurdle, while Alonso finished that session in P3. While the Frenchman was only 0.802s off of Verstappen’s benchmark, he will start all the way down in P17.

In an exact replica of Styria, Kimi Raikkonen, Nicholas Latifi and both Haas drivers of Mick Schumacher and Nikita Mazepin were the others to be eliminated, while Ricciardo survived for Q2 – but only just.

There was a mixture of soft and medium tyre running in the second part of qualifying, as those to make it through to the top 10 hoped to set their quickest time on harder rubber to open up their strategy possibilities in the race.

That combination led to an even closer timesheet after the first runs, with only 0.202s separating the cars from P2 to P10. The Mercedes of Hamilton and Bottas were P5 and P8 respectively, meaning they were by no means safe heading into the final part of Q2.

Alonso ended up being the victim of being the first driver out as a queue starting their lap ended up getting in his way at a crucial moment in his lap.

The slow Aston Martin of Vettel in front meant Alonso had to back out of his final two corners, and the Spaniard was incandescent with rage on the radio and fuming in his car. The German put out his hand as if to apologise, but that will have been small tonic for the double World Champion, who will line up P14.

After missing out by only 0.008s last week, a jubilant George Russell was on the right side of the timesheets on this occasion as he managed to make it through to Q3 in his Williams – by only six milliseconds.

In doing so, the Briton knocked out both Ferrari drivers in the process, alongside Ricciardo – another Q2 elimination for the Australian – and Antonio Giovinazzi.

Not only did the Williams driver get through to Q3, “Mr Saturday” was able to make it through on the medium tyres, which will offer him another strategic advantage heading into the race, with the soft tyres expected to degrade heavily early on.

The first run of Q3 saw the excitable Dutch fans roar as their man topped the timesheets yet again, with Norris getting himself ahead of both Mercedes drivers once again, but there was one more attempt yet to come.

Verstappen could not improve on his time, but Norris was less than a hundredth behind the Dutchman through the first two sectors, with fans holding their breath before he finished his lap. But only 0.048s separated the McLaren man from his first pole position in the end.